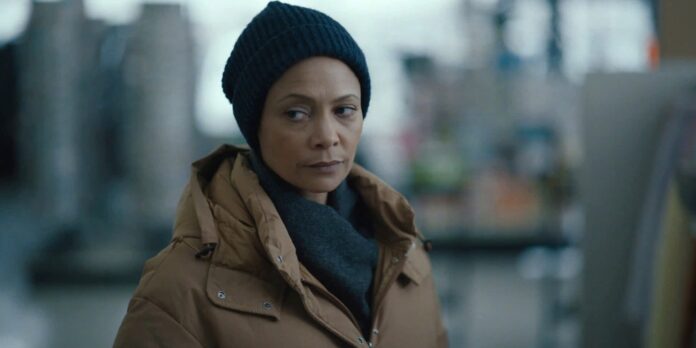 THE STORY – A college professor gets drawn into an escalating battle of wills after she catches two hunters trespassing on her property in the remote mountains of the American West.
​
THE CAST – Thandiwe Newton, Joris Jarsky & Jefferson White

Countless actors working today deserve a bigger spotlight than they have received. Even the ones who have managed to find more high-profile success often do so while still maintaining a background presence in their varied projects. One could see that for much of Thandiwe Newton’s career, as she has given some amazing performances in a plethora of well-regarded pieces but has yet to be central to an entire story. “God’s Country” finds her squarely at the center and provides her with the favorable circumstance to showcase her talents further. Unfortunately, the film that surrounds her comes up much shorter in its attempt to communicate anything on a deeper level meaningfully.

Newton plays Sandra, a college professor living out her lonely existence following the death of her mother. While consumed with her own journey of grief, she also finds herself in conflict with some locals encroaching on her property in the isolated wilderness. A pair of hunters have been trespassing in order to find game, putting them at odds with a headstrong Sandra who is determined to put them in place. However, her actions only cause further consternation amongst the townsfolk. The local sheriff (Jeremy Bobb) does little to diffuse the growing tension, while Nathan (Joris Jarsky) and Samuel (Jefferson White) continue their provocation. These events only bring to the surface all the tormented feelings within Sandra, leading her and those in battle around her to a dramatic escalation.

As noted, Newton has shown many fantastic portrayals in the past, and it is wonderful to see her take center stage. What’s particularly captivating about her is the sense of stillness she creates, never indulging in histrionics and instead opting for an interior expression. She holds so much power in a gaze that lingers in a moment so that when the sharp emotional strikes reveal themselves, the impact is sizable and affecting. There is a nuance to Newton’s work that is appreciated and is by far the standout amongst the cast. There are some notable turns from the supporting players, still. Bobb has an awkward but effective charisma that fits well with this small-town policeman, while both Jarsky and White maintain a foreboding mood that matches the suspense around their intentions. It’s an able ensemble, though all in the service of the lead protagonist, and none give more than what is necessary.

Julian Higgins crafts an atmospheric tone that is saturated with tension. At least, the filmmaking evokes such a disposition through the strong compositions of the barren landscapes. The haunting score aids in elevating this pervasive anxiety and helps establish this character study’s driving momentum. However, the script from Higgins and Shaye Ogbonna leaves much to be desired. One is grateful for the manner in which the strife fluctuates between internal and external forces, which keeps the narrative engaging. It is unfortunate that this endeavor does not accomplish much beyond the surface. The storytelling doesn’t not calibrate these two planes gracefully, which often contributes to the languid pace and dry spirits. The story is also thematically muddled, bringing up socially minded commentary on the subjects of police brutality and workplace sexual harassment without authentically tying into the more personal exploration. By the time the finale is reached, the events lack a profound conclusion and leaves an enduring hollowness. The screenplay has good intentions but struggles to join all its disparate topics into a satisfying whole.

Whatever there is to value in “God’s Country” is ultimately undermined by so many other elements. Newton delivers an engrossing performance that is layered in a method that draws one into this character’s plight. It’s a testament to her great skill and compliments the solemn temperament that can often be quite alluring. Sadly, the foundation lacks an intrigue to warrant greater investment. The disorganized presentation of these themes is at odds with the central plot, and neither sufficiently achieves victory. One is grateful for the opportunity granted to Newton for such an exhibition. The final results are far less than the sum of its parts.

"GOD'S COUNTRY"<b>THE GOOD - </b>Thandiwe Newton gives a captivating performance, one that is engrossing through an internalized stillness and powerful expressions. The filmmaking evokes a tense atmosphere that is effective. The supporting cast has good players among them.<br><br> <b>THE BAD - </b>The narrative is cluttered with too many themes that barely connect to the more personal character study, leaving a languid pace and muddled commentary. The storytelling has a persistent hollowness that doesn't reveal much that is profound or impactful.<br><br> <b>THE OSCAR PROSPECTS - </b>None<br><br> <b>THE FINAL SCORE - </b>5/10<br><br>