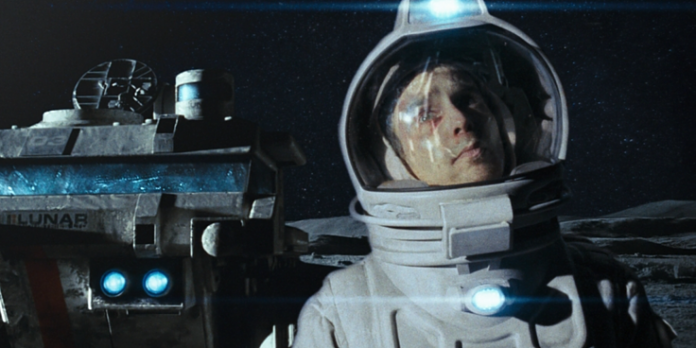 THE STORY – Astronaut Sam Bell’s (Sam Rockwell) three-year shift at a lunar mine is finally coming to an end, and he’s looking forward to his reunion with his wife (Dominique McElligott) and young daughter. Suddenly, Sam’s health takes a drastic turn for the worse. He suffers painful headaches and hallucinations, and almost has a fatal accident. He meets what appears to be a younger version of himself, possibly a clone. With time running out, Sam must solve the mystery before the company crew arrives.
​
THE CAST – Sam Rockwell, Kevin Spacey, Dominique McElligott, Kaya Scodelario, Benedict Wong, Matt Berry & Malcolm Stewart

“Moon” is not the kind of film that you watch only once. It is a film that defies expectation, mostly due to a versatile and commanding performance from the underrated Sam Rockwell. It is largely rewarding on a second viewing, even if you know its twists and eventual outcome. That is because “Moon” is a story that deals with identity, purpose, and that innate human desire to want to go home. Even when your home is 230,000 miles away.

Sam Bell (Sam Rockwell) is an astronaut who is completely alone on the far side of the moon. Along with an extremely helpful artificial intelligence named GERTY (Voiced by a very soothing Kevin Spacey), Sam is serving a 3-year contract for Lunar Industries LTD. His job is to acquire helium-3 and transport it back to Earth so that the planet may continue to use fusion energy as a resource from the sun. It’s been a long haul for Sam, without any human contact and terribly missing his wife Tess and their newborn girl Eve. However, with 2 weeks remaining on his contract, Sam gets involved in an accident which leads to his discovery that he may not be as alone as he thought.

Sam Rockwell gives the performance of his career as Sam Bell. Mostly cast as a character actor in supporting roles. He is finally given a multifaceted leading role that provides him with a wealth of material to explore as an actor. He has the daunting task of having to carry a feature length film, pretty much by himself and he pulls it off with charisma, likability and a complex range of emotions as the film’s brief runtime of 97 minutes moves with energy and a terrific sense of pacing.

That pacing is set by director Duncan Jones (Son of David Bowie) and he knocks it out of the park in his debut film. Here, the young director creates an isolation and sense of paranoia that toys with the audience’s emotions and knows how to perfectly release the tension in a manner that makes sense to the character Sam Bell. On a relatively small budget of $5 million, Duncan Jones is able to stretch it to make this film look like a $35 million film. His production design of the Sarang Station that Sam resides in feels lived in and richly detailed. The visual effects, although not quite up to the standards of summer blockbuster films, are kept to a minimum and serve the story where they are needed, without being overly distracting due to their limited resources.

The emotion of the film is transmitted beautifully by composer Clint Mansell. His score is eerie, melodic, and evocative. It perfectly conveys the longing desire that Sam Bell has to want to go back to Earth, the paranoia he experiences on the final days of his contract, and the emotional catharsis he experiences once he realizes what his true purpose on the moon really is. Mansell continues to prove why he is one of the best composers working today when it comes to simple motifs that can be used to illicit a great amount of emotion from the viewer.

Duncan Jones struck cinematic gold on his feature length debut by teaming up with Sam Rockwell and Clint Mansell to create “Moon.” Without those two main components, I fear the film would not be as good as it is. To Duncan Jones’s credit, he does an excellent job of juggling shifting perspectives and for stretching the limits of his production budget to give this indie film a high production value that will certainly attract skeptics who are used to glossy, over visualized blockbuster science fiction films. This isn’t an action film by any stretch of the imagination. This is a very personal and human story expertly sold by the remarkable and multilayered performance from Sam Rockwell that deserves your attention at least once. But truthfully, once it’s over, you’ll probably want to go back to “Moon” at least one more time.