“GAMESTOP: RISE OF THE PLAYERS” 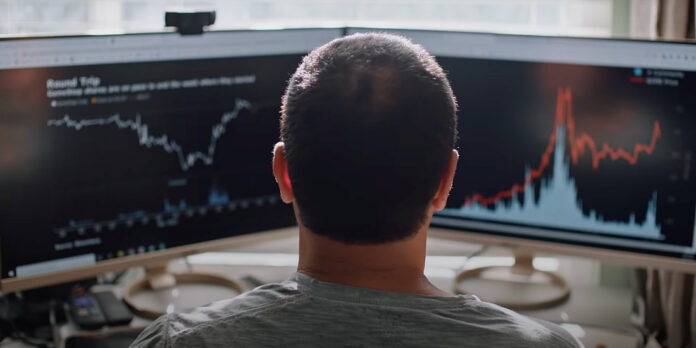 THE STORY – From the makers of Console Wars comes the origin story of the Gamestop stock market phenomenon, featuring exclusive access to the original players who lit the fuse on a historic amateur investor uprising. Spotlighting the human side of a sensational business drama, Gamestop: Rise of the Players is a David vs Goliath tale about ordinary people waking up to the power they have in numbers.
​
THE CAST – N/A
​
THE TEAM – ​​Jonah Tulis (Director/Writer)

​It seems like a lifetime ago at this point, but in January 2021, all eyes were on GameStop. Or, more accurately, on GME, the company’s stock. Over the course of two weeks, the supposedly failing company saw its stock price rise 1,500% to over $400 per share, driven mainly by the subreddit r/wallstreetbets. When a hedge fund that had bet against GME got bailed out by another larger hedge fund, and stock-exchange app Robinhood halted trading of the stock, the situation became a perfect storm, an easy-to-understand David & Goliath story about a group of regular-guy outsiders taking on and almost getting away with destroying some of the billionaires who have traditionally dominated Wall Street by using ethically-questionable tactics. It’s a classic human interest story, one with plenty of easily understood layers of meaning, and perhaps the biggest surprise of Jonah Tulis’s “GameStop: Rise of the Players” is how thoroughly it covers the story so soon after it happened.

The story actually begins in late 2019, just before the COVID-19 virus was first reported on when several individuals invested in GameStop and found each other through the magic of the internet. These people include Justin Dopierala, a first-generation college graduate who started his own capital management firm after none of the big firms would hire him; Jenn Kruza, who left a well-paying job she hated to live her dream of working in the music industry; Rigoberto Alcaraz, a college student whose Mexican parents didn’t understand the concept of investing as a way to make money; Joe Fonicello and Abbe Minor, college sweethearts who took advantage of the pandemic to see the country by traveling together in a van; Rod Alzmann, a corporate strategist for a trucking logistics company; and Jeff Tarzia, a former video game tester turned YouTuber who drags his wife and kids along for the ride.

This diverse group of people invested in GameStop against all prevailing logic of the time, which mostly came from people complaining about their in-person experiences at GameStop stores and Wall Street elites who believed the company was going to be the next Blockbuster Video and get pushed out of the market because of an outdated business model (video game purchasing moving increasingly virtual). All they had was their common sense, in most cases influenced by their own positive experiences with the company, and their own research, which seemed to contradict a lot of the common wisdom. None of them could have anticipated what was coming and just how much their lives would change because of it.

As more is revealed about GameStop and the financial industry, the twists and turns of the story provide a solid base for Turis (director of the similarly entertaining “Console Wars”) to build on. He knows how to make everything breezily entertaining, even when the story has to paint a depressing picture of how the wealthy will always look out for their own best interests at the expense of everyone else. The fire of its main interview subjects is palpable, and Turis knows when to lean into that to pull the audience through.

All the interview subjects are incredibly candid about their experiences, even Andrew Left, whose role as head of the highly-respected investment firm Citron Research led to him becoming the face of the movement against the GME stock’s rise. That makes it a bit frustrating that there are no interviews with anyone from GameStop itself. While there are also no interviews with the people behind Melvin Capital and Citadel, the two hedge funds with the biggest stake in GameStop’s ultimate failure, there is still plenty of archival footage of them for Turis to use. But there’s nothing from the company at the center of it all. Given how thoroughly the film examines this story, it’s disappointing to get to the end and realize there’s a pretty significant portion of it missing entirely. Turis covers it up well, though, including plenty of curious details and off-shoots to maintain interest even though the story’s broad strokes are familiar.

The 8-bit animations used for transitions and visualizing some of the trickier financial concepts make for an appropriate artistic flourish and go a long way towards selling the story as a battle royale between the common folk and the establishment. On that level, “GameStop: Rise of the Players” delivers, giving the audience a rousing story of underdogs rising up and taking the wealthy and mighty down a peg, complete with an “Ocean’s 11”-style epilogue in Las Vegas. It’s a straightforward documentary, but it’s still a good story and well told.