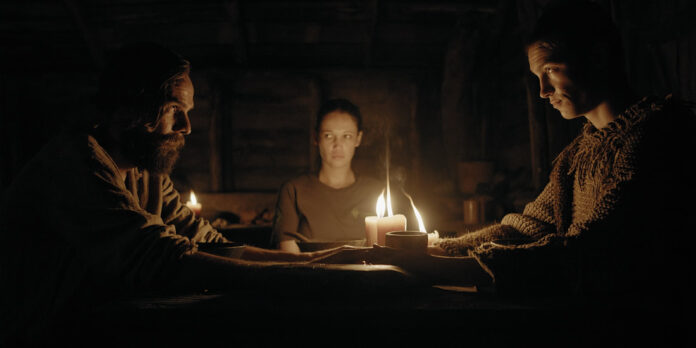 THE STORY – On a surveillance mission in a primordial forest, a park ranger encounters two survivalists following a post-apocalyptic lifestyle. The boy and his philosophical father seem to have their own religion and a mysterious relationship to nature. There are many suspicious aspects to their existence, but when the cabin is attacked by strange, post-human beings one night, she learns that there is a greater threat in this emergent wilderness.
​
THE CAST – Monique Rockman, Carel Nel & Alex van Dyk

​​​”Gaia” is an enveloping movie experience. The film touches on numerous topics, including religion, modernity, and basic morality, but I’m happy to say that it does not feel muddled or superficial in its handling. It uses tight writing to unspool these topics, examine them before the audience, and explore the disturbing possibilities at the heart of each one. There aren’t too many answers accumulated by the end of the film, but then again, the horror genre has always been predicated on asking the most unsettling questions. Leave the tidy solutions to the dramas and mysteries.

The film opens on what is basically the inciting incident. Gabi (Monique Rockman) is a park ranger who ventures into a primordial forest on a surveillance mission and gets separated from her partner. She attempts to contact him but is injured by a booby-trap and taken into the care of two survivalists, Barend (Carel Nel) and Stefan (Alex van Dyk). The father-and-son are following a post-apocalyptic lifestyle seemingly ordained by their religion. Gabi is initially skeptical of their beliefs, but a chilling encounter with an ancient creature forces her to rely on them for survival.

“Gaia” director Jaco Bouwer understands the power of anticipation, and he ratchets up the tension to unbearable heights whenever the creature is near. The creature’s initial sighting in the survivalists’ cabin is prefaced by the sound of its screams outside the door, and the pained, human-like tone of these screams is enough to make anyone double-check their doors before bed. Bouwer gets a little more lenient with showing the creature later on, but the anticipatory quality lingers. There’s nary a moment of released tension in the 96-minute runtime.

“Gaia” borrows from some of its modern-day peers, chief among them Lars von Trier’s “Antichrist” and Alex Garland’s “Annihilation.” The former can be seen in the surreal, psychosexual dreams that litter Gabi’s nights, and the latter can be spotted whenever the trio interacts with a mystical tree (referred to as “She”). The creature bears a passing resemblance to the aliens in “A Quiet Place,” though it’s designed to look more human and thus more unsettling. I mention these films not as a means of putting “Gaia” down but rather to praise it for being able to borrow from others while maintaining its artistic identity.

Bouwer’s direction is strong on its own, though Tertius Kapp’s screenplay undoubtedly enhances it. The trickiest part of a horror film is making the viewer care about the characters when they aren’t in peril, and Kapp’s thoughtful dialogue achieves this tricky balance. Gabi is the character we intuitively gravitate towards, given her position as the film’s protagonist. Still, the further the film progresses, the more we come to understand the external lunacy of Barend. The manic look in his eye undoes his attempts to pass himself off as a thoughtful, monk-like figure, and guessing what he’ll do next places him next to the creature in terms of unpredictability. Madness can often be a bigger concern than monsters.

I’m leaving large chunks of the story purposely vague in the hopes that you will seek the film out on your own. My whittled-down description of what occurs in the film’s last act would pale in comparison to seeing it played out, so I won’t bother wasting your time or mine. Rest assured, you won’t be disappointed.

The film’s technical elements only bolster this narrative foundation. The beautifully muted cinematography by Jorrie van der Walt furthers the notion we are increasingly losing touch with the outside world. Simultaneously, the sparing, mournful score by Pierre-Henri Wicomb helps us lament the doomed fates of all characters involved. There’s a primal quality to the score that feels increasingly proper given how the characters are reduced to their most savage states. The sound design works lock-and-step with Wicomb’s score, making us suspicious of every crushed leaf and shaking bush within the frame.

Sadly, “Gaia” has some shortcomings. The fever dreams that Gabi experiences are visually striking, but the film leans a bit too heavily on her waking up, only to experience more oddities and wake up a second time. I understand its function in the story, but it’s a story tool we’ve seen a few too many times before. There are also some questionable digital effects scattered throughout the film. While the creature looks stellar, an early effect consisting of an outstretched plant stem feels curiously unrendered. Given Bouwer’s ability to elicit scares elsewhere, I am confused why he would feel the need to include such a shoddy effect. Thankfully, these issues are fleeting and largely forgotten by the end of the film.

On the whole, “Gaia” is an invigorating effort; combining body horror, existential dread, and ancient monsters into a singular genre cocktail. Horror fans will appreciate the similarity to critical favorites of the past few years, but the film manages to carve its own twisted path at the same time. Travel down this path at your own peril.