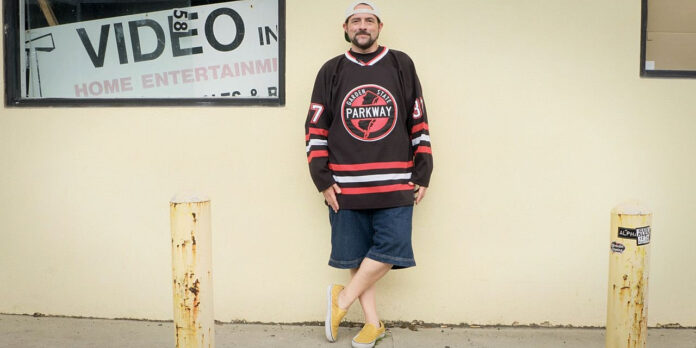 THE STORY – A documentary on the life and career of filmmaker Kevin Smith.
​
THE CAST – Kevin Smith

​​”Clerk” retraces filmmaker Kevin Smith’s career, from his humble beginnings in New Jersey to his meteoric rise through Hollywood in the 1990s. The documentary was made in collaboration with Smith, who provides first-hand accounts of his successes, his mistakes, and the heart attack that nearly killed him in 2018.

The documentary is a standard director profile in that it runs chronologically through Smith’s films and features talking heads from cast and crew. The roster of talent that director Malcolm Ingram puts together is a testament to how many careers Smith has touched through his slacker-centric comedies. It’s humorous and heartwarming to hear stories from the likes of Matt Damon, Ben Affleck, Stan Lee, and Smith’s hetero life mate, Jason Mewes.

“Clerk” is a somewhat unfocused effort, and there are stretches where the documentary chooses to explore topics that are tangentially related to Smith. The sequence about Penn and Teller feels like a weak attempt to connect the filmmaker with other artists, but testimonials from people like Richard Linklater and Jason Reitman fulfill this quota more effectively. There’s creative editing that comes into play when Smith and producer Scott Mosier are discussing “The Breakfast Club” in separate interviews. Still, this level of playfulness never reenters the documentary and the subsequent editing choices feel a bit bland.

There’s also the nagging sense that Smith and his cohorts are retreading familiar ground during the doc’s first half. It’s fun to hear them wax poetic about the making of classic comedies like “Clerks,” “Chasing Amy” and “Dogma,” but these films have already been explored ad nauseum in docs like “Snowball Effect: The Story of Clerks” and “Judge Not: In Defense of Dogma.” There’s nothing said about the View Askewniverse that fans don’t already know, and I was slightly let down by the lack of new insight.

I’m pleased to report that things pick up during the second half of “Clerk” by virtue of it being the less celebrated phase of Smith’s career. Smith is good at diagnosing the virtues and vices of his own films, and hearing him discuss missteps like “Zack and Miri Make a Porno” or “Cop Out” is refreshingly blunt. The documentary also provides context for the stylistic departure of Smith’s more recent films (“Red State” & “Tusk”), as well as his brief detours into cartoons and comic books. It doesn’t necessarily make these pieces more enjoyable, but by exploring Smith’s artistic passions, the documentary adds a secondary layer of appreciation. At the end of the day, we’re watching a pop culture nerd make the content he wants to see.

The rest of “Clerk” details Smith’s transition to podcasting and YouTube. It’s a natural direction for the knowledgeable Smith to head in, and it has extended his career in ways he previously thought not possible. It’s here that the heartwarming thesis of Ingram’s documentary comes into focus. Smith never planned to become the biggest filmmaker of all time. He merely wanted to tell stories with and about his friends. His willingness to follow his muse (insert Jason Mewes pun here) through different mediums and decades is an inspiration to anyone who wants to avoid a conventional Hollywood career. To paraphrase the man himself, Smith is the “Kevin Smith-iest Kevin Smith he can be,” and we are lucky to have him around.

“Clerk” is a good starting point for Smith novices, but longtime fans may feel like they’re watching a retread of the more in-depth documentaries that came before it. A fun watch, but not a revelatory one.