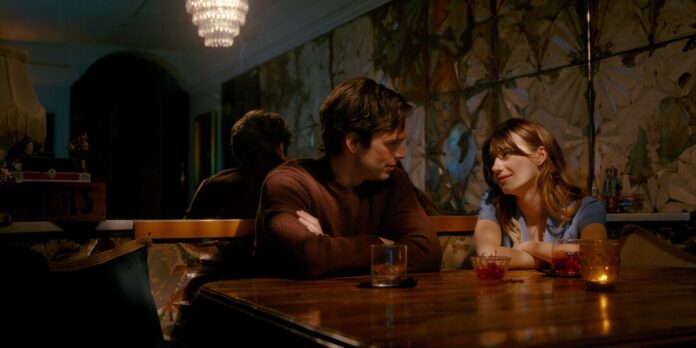 THE STORY – Frustrated by scrolling dating apps only to end up on lame, tedious dates, Noa takes a chance by giving her number to the awkwardly charming Steve after a produce-section meet-cute at the grocery store. During a subsequent date at a local bar, sassy banter gives way to a chemistry-laden hookup, and a smitten Noa dares to hope that she might have actually found a real connection with the dashing cosmetic surgeon. She accepts Steve’s invitation to an impromptu weekend getaway, only to find that her new paramour has been hiding some unusual appetites.

“Hopefully, it’ll make for a good story,” Noa (Daisy Edgar-Jones) tells her best friend Mollie (Jojo T. Gibbs) on the phone before going on her latest date with someone from a dating app. It’s a line that I’ve heard all too often from female friends of mine as they set out for another coffee, drink, or dinner with a man who clearly is not what they’re looking for. And Chad (Brett Dier) certainly is no ideal date: the pretentious scarf-wearing man is racist towards their waiter, tells Noa that she should dress more femininely, and erupts her when she kindly turns down a second date, telling her, “Good luck finding a guy, you stupid bitch.”

There’s much that will be familiar to women in Mimi Cave’s feature debut “Fresh,” from Noa receiving unsolicited photographs to the way that she clutches her keys between her fingers as she walks to her car. Cave and writer Lauryn Kahn capture many of the issues that plague straight women trying to find a match in modern society. Thus, when plastic surgeon Steve (Sebastian Stan) appears in the grocery store, awkwardly charming as he shares his enthusiasm for cotton candy grapes, it’s easy to see why Noa’s impressed. He’s intelligent without being pretentious, speaks fondly of his sister and niece, and seems captivated by Noa. She and Mollie question if it’s too good to be true – surely, he must be married or something – but Noa still agrees when he eagerly suggests they go away together for a weekend vacation.

That’s when the opening credits occur, over thirty minutes into the film, signaling its drastic turn from a sympathetic rom-com to an anxiety-inducing thriller as Steve shows Noa who he really is. It’s not a turn that you could possibly see coming and is best experienced with as little knowledge of the film as possible if you can. But it provides an interesting commentary on how men view women as objects, a commodity for their own benefit. From here on out, it plays a line between body horror and black comedy, never entirely losing its dramatic stakes but also reveling in funny moments that make you cringe once you realize what you’re laughing at. There are plenty of images that might turn your stomach, but it relies more on concepts that are chilling than jump-scares. It doesn’t even get particularly gruesome until the very end when it seems like it doesn’t know what else to do other than indulge in a typical horror slasher moment. The film is undoubtedly at its strongest in the first hour of its run-time, but the performances sustain it to the end.

Edgar-Jones, best known for her work on the television series “Normal People,” does an excellent job of grounding the film with her performance. She’s endearing without being saccharine, and it’s easy to root for Noa, first to find love and then to outsmart Steve. From her subtle reactions on the disastrous first date to her bigger moments later in the film, Edgar-Jones always feels like she gives the right emotions for the particular circumstance in front of her and never overplays it.

Stan, on the other hand, gets to have some fun with his performance. He goes from boyishly charming to chaotically menacing, seemingly in the blink of an eye but maintains that magnetism that initially drew Noa to him throughout. The role of Steve is the perfect showcase for all of his talents and feels, in some ways, like the culmination of his career thus far. It’s delightful to watch him dance in the kitchen to old pop songs, but his unpredictability keeps the viewer on their toes. Stan’s natural gift, as has been seen across his career in roles ranging from Jefferson on “Once Upon a Time” to Charles Blackwood in “We Have Always Lived in the Castle,” is his ability to continue to charm even once a dark side has been revealed. There are glimmers of the man that we see in the first act throughout, and they’re almost enough to make you and Noa forget who he is for a moment. When one of his more normal flaws comes to light, you still feel strangely betrayed.

However, a mark against the film is how it handles its side characters. Not much is known about Mollie other than that she’s Black, queer, and very devoted to her best friend. She spends most of the film either emotionally supporting Noa or heroically trying to save her. It’s not a great example of representation on camera, but Mollie is at least the sort of friend we all would like to have in a situation like this. Dayo Okeniyi’s Paul gets even less development, to the point that it’s puzzling why he’s a character at all.

While the film does have some signs that it’s a narrative debut, it’s still very stylishly put together. Alex Somers’s unique score builds tension perfectly and gives us a clue early on that this is not the movie it seems to be. Pawel Pogorzelski’s cinematography is likewise unique and attractive to the eye. He deftly uses mirrors and shows off the fantastic set design, playing around with space. He also sometimes holds in tight on close-up parts of Noa and Steve’s faces to help build intimacy between them and the viewer.

Some may be disappointed that “Fresh” doesn’t provide more of a feminist thesis on modern dating or women’s bodies, but it’s simply not trying to. It does provide significant and depressingly apt commentary on women’s dating experiences, from how other women are sometimes complicit in men’s wrongs, to how Noa blames herself for what happens to her. Still, it’s more interested in playing with genre than anything else. Cave and Kahn have created something excitingly (pardon the pun) fresh, in the vein of horror comedies of the past few years, with a very different twist applied to it. But it’s Edgar-Jones’s grounded Noa and Stan’s darkly charismatic Steve that make “Fresh” something that could become a cult classic in the future.