“Flee” And Making History At The Oscars 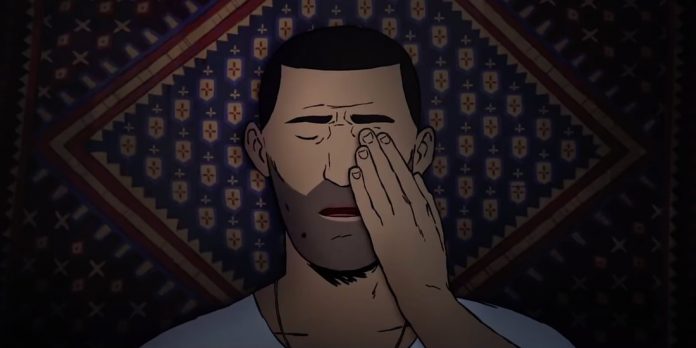 This week, the Academy Of Motion Picture Arts And Sciences made history by rewarding Jonas Poher Rasmussen’s animated documentary “Flee” with three Oscar nominations: Best Animated Feature, Best Documentary Feature, and Best International Feature. It is the first documentary to be nominated for Best Animated Feature and the second animated film to be nominated for Best International Feature Film (the previous was “Waltz With Bahir” in 2008). It is the fifth documentary to be nominated for Best International Feature Film, following “Waltz with Bashir,” “The Missing Picture,” “Honeyland,” and “Collective.” With the last two, “Flee” continues a three-year streak of a documentary, landing more than two Oscar nominations. It is also the first documentary since “Woodstock” (1971) to receive more than two nominations. All pretty impressive accomplishments, right? So, naturally, it has to win at least one of these Oscars…well, not so fast.

“Flee,” tells the inspiring, sometimes heartbreaking, and consistently beautiful story of “Amin,” a gay Afghanistan refugee who fled to Denmark. He recounts his life to his friend, writer, and director Jonas Poher Rasmussen, who protects his identity and everyone he loves by using animation instead of live-action to tell his incredible story. The result is one of the most thrilling and breathtaking cinematic experiences of the year.

Once it premiered at the Sundance Film Festival, “Flee” started a long march towards making history with the Academy winning the World Cinema Documentary Competition award at the festival, later being acquired by NEON, and going on to win 13 critics’ prizes for Best Documentary Feature (including the Gotham award and New York Film Critics Circle), 10 for Best Animated Feature (including the Los Angeles Film Critics Association award), and 4 for Best International Feature Film. As of today, it’s currently nominated for 8 Cinema Eye Honors awards, the ACE for Best Edited Documentary Feature, the PGA for Best Documentary Feature, two BAFTA awards for Best Animated Feature and Best Documentary feature, 4 Annie Awards, and the Critics Choice Awards for Best Animated Feature and Best International Feature. The film currently had a 99% approval rating on Rotten Tomatoes, a 91 on Metacritic, a 4.1 on Letterboxd, and an 8.1 on IMDb. With so much love and three opportunities to win an Oscar, where does it currently rank in our predictions?

BEST ANIMATED FEATURE
As of 2/10/2022, the consensus from the Next Best Picture team for Best Animated Feature currently has “Flee” sitting in second place behind Golden Globe-winner “Encanto.”

“Encanto’s” lead over “Flee” is currently unanimous amongst the team, although this didn’t use to be the case. “Flee” was, for a time, leading the pack in this category during the critics’ awards phase of the season when it was picking up more wins than “Encanto” (10 vs. 7) and trailing only “The Mitchells vs. The Machines,” which lost some steam after it failed to receive a nomination from the Golden Globes. That was until “Encanto” took on a life of its own after its premiere on Disney+ and blew up to become a cultural phenomenon with the smash-hit success of the billboard topping single “We Don’t Talk About Bruno.” With a spotlight placed on “Encanto’s” vibrantly beautifully soundtrack, the film received two additional Oscar nominations for Best Original Score and Best Original Song for “Dos Origuitas” (“Bruno” was not submitted for consideration at the time before it organically became the popular hit it is now), equaling “Flee’s” total Oscar nominations at three. Now that all three animated features have been nominated, many are seeing this as a race between populist favorite “Encanto” and the critics’ darling, “The Mitchells vs. The Machines.” However, we here at Next Best Picture feel that the underdog narrative of “Flee” and the timeliness of its story regarding the refugee crisis puts it ahead of “The Mitchells vs. The Machines.” In order to come back and take the number one spot, we’d have to see it upset “Encanto” somewhere, such as BAFTA or Critics Choice. Between them and Pixar, Disney has won Best Animated Feature 14 out of 20 times, and every time we think there’s a bit of fatigue setting in for the Mouse House, they continue to win even with tight competition such as “Toy Story 4” in 2019. Unless we see a huge swing in momentum, expect this to go to “Encanto.”

BEST DOCUMENTARY FEATURE FILM
Once again, our team has “Flee” in the number two position for a category many thought it could go on to win earlier in the season.

The key here was always whether or not “Summer of Soul” would be nominated or not. It’s clearly the favorite amongst the critics, with a whopping 37 wins in this category, including a record-breaking six wins from the Critics Choice Awards. There was a time when the Critics Choice Award winner for Best Documentary feature would also lead in critics’ prizes then inexplicably be overlooked by the Academy’s Documentary branch (RIP “Jane,” “Won’t You Be My Neighbor?,” “Apollo 11” and “Dick Johnson Is Dead“). Questlove’s “Summer of Soul” finally broke this streak and is now on its way to sweeping the rest of the season and claiming the Academy Award in the process. One can argue the Academy still maintained their tradition of overlooking a populist pick by not nominating “The Rescue,” which was neck and neck with “Summer of Soul” for that frontrunner position all season long but “Flee” needed “Summer of Soul” to miss, not “The Rescue.” Had Questlove’s concert film missed and Oscar-winners Elizabeth Chai Vasarhelyi and Jimmy Chin (“Free Solo“) returned, “Flee” would’ve still had an uphill battle, but at least the race would’ve been closer. With a celebrity director who many in the Academy already know as the face of the Oscar campaign, coupled with the critical and audience success, “Summer of Soul” is going to steamroll the rest of the season at this point in dominant fashion. It’s nominated for prizes that “Flee” did not receive, including the DGA for Best Documentary, Best Film Editing at BAFTA, and even a Grammy for Best Music Film. While “Flee” would be a deserving winner, it would be a massive and quite frankly shocking upset to see it win out over “Summer of Soul” at this point.

BEST INTERNATIONAL FEATURE FILM
And now we come to “Flee’s” third and final nomination where the Next Best Picture team has it ranked lowest in its odds to win.

“Drive My Car” is going to take this. No question. You do not get nominated for Best Picture, Best Director, and Best Adapted Screenplay, and then go on to lose Best International Feature Film. You just don’t. If nominated for both Best Picture and Best International Feature in the same year, you can bet the farm you’re going to win Best International Feature. This has been the case with so far with “Z,” “Life Is Beautiful,” “Crouching Tiger, Hidden Dragon,” “Amour,” “Roma,” and “Parasite.” So, if “Drive My Car,” by some miracle, managed to miss here, it would not only be the first but one of the biggest upsets in Academy history, dating back to 1969. Now, “The Worst Person in the World” picked up a fantastic nomination for Best Original Screenplay, and who knows how close it was in other categories such as Actress and Best Picture. Still, the fact of the matter is it didn’t get those other above-the-line nominations, “Drive My Car” did. And maybe, you could make an argument that “Flee” was in contention for a Best Picture nomination. If three individual branches felt it was the best film of the year in all three of the designated categories, how close was it to a Best Picture nomination overall? Much has been written about the role of critics groups played this season in propelling “Drive My Car” to where it has gotten by giving it the trifecta wins of NYFCC, NSFC, and LAFCA for Best Picture. While the Oscar nominations for “Drive My Car” are wholly deserved and no doubt thanks in part to the larger Academy voting membership (now nearly at 10,000 members), their increased diversity, and the highest voter turnout in their history, it is a tad bit unfortunate to see (much like when the critics rally behind a single female director with their prizes in a given year), that there was only room for one international film to break out in Best Picture with the Academy this year. It’s ok, though. We need to celebrate the wins where we can.

With “Drive My Car’s” historic run, “The Worst Person in the World” and “Parallel Mothers” landing nominations outside of Best International Feature, and “Flee” nabbing three individual nominations for Best Feature of the year, this year’s Oscar nominations are a step in the right direction for the Academy as they continue to embrace truly terrific cinema not just from Hollywood but from all over the world. Although “Flee” may now be seen as an underdog in all three categories, the significance of its three nominations cannot and should not be understated. This tiny independent movie caught people’s attention and captured their imaginations with its heartfelt storytelling, simple but effective animation, and vital subject matter. Whether it wins three Oscars, two, one, or none, it’s no less the breathtaking cinematic experience it was before and will forever have movie lovers and Oscar fans curiously seeking it out to see what all the fuss was about in 2021 when it made history receiving these three nominations.

​Have you seen “Flee” yet? If so, what did you think of it? Do you think it can win any of its three Oscar nominations” If so, which one? Check out the Next Best Picture team’s current Oscar predictions here and let us know your thoughts in the comments section below or on our Twitter account.