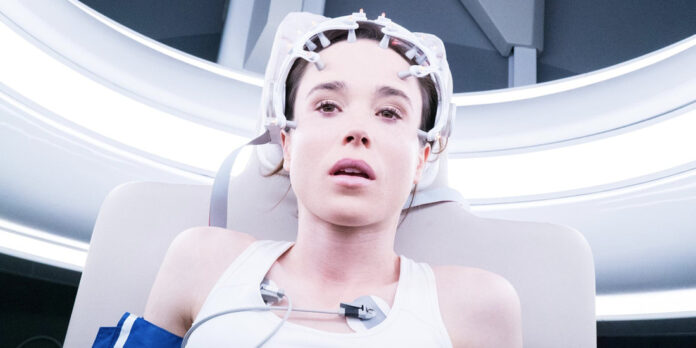 THE STORY – Five medical students embark on a daring and dangerous experiment to gain insight into the mystery of what lies beyond the confines of life. The bold adventure begins when they trigger near-death experiences by stopping their hearts for short periods of time. As their trials become more perilous, each must confront the sins from their past while facing the paranormal consequences of journeying to the other side.

​There’s no sense in burying the lede: “Flatliners” is terrible. The possibility for jokes is endless, but for your sake, I’ll refrain from any flatlining puns.

This remake of Joel Schumacher’s 1990 film follows a group of young students as they embark on a dangerous medical experiment to try to document what happens when you die. I can’t stress how utterly stupid this plot is. Look, of course, we would all love to have scientific evidence of what comes after death, but their experiment doesn’t remotely qualify. Courtney, played by Ellen Page, decides that stopping her heart for one minute before resuscitation will lead to some monumental discovery for humanity. I’m no medical doctor, but doesn’t this happen to people every day? Why is this some crazy, career-making idea?

As the doctors kill themselves and document the process, initially it’s all great. It turns out that dying makes you really want to party. Oh, and it also gives you superhuman intelligence. After Courtney flatlines, she’s miraculously able to answer these medical mysteries given to them in class. But it’s not all good: before long they discover, cue the dramatic music, their sins are hunting them down. It’s about as dumb as it sounds. Courtney’s dead sister is following her. Jamie (James Norton) is haunted by an old girlfriend who he abandoned in her time of need. Again, correct me if I’m wrong, but peoples’ hearts stop all the time and they need to be revived, and as far as I’m aware, no one comes out being tormented by their past mistakes.

The movie devolves so quickly into the most generic and unintentionally hilarious horror cliches: a voice coming over a radio saying the character’s name, a young, creepy-looking girl shuffling along, a dead body rising in a morgue. It’s all so bland and forgettable that there aren’t even good scares to redeem the plot. The film doesn’t even try to explore ideas about what happens after or the meaning of life or anything interesting. They just die, resuscitate, party, and then their demons haunt them. Nothing deeper than that.

Another odd choice is the inclusion of Kiefer Sutherland, the star of the original “Flatliners”, who plays an instructor in a few scenes. I kept expecting him to join the young doctors in the experiment and describe his own experiences from the first film, but no. It was merely a cameo for no distinguishable purpose.

While the actors do what they can within this silly movie, they can’t save it. Nor can the visuals of the film, which are occasionally interesting. “Flatliners” just doesn’t even make sense as a movie at times. There’s this baffling moment when Jamie is fighting off his demons on his boat and he falls into the water. Climbing out, he gets stabbed in the hand with a knife. And then it abruptly cuts to all of the doctors, Jamie included, sitting in a bar talking as though that scene hadn’t happened, except for a bandage on his hand. It’s as if they just indiscriminately cut out three or four minutes of the movie. It was a truly weird choice.

Even with such a goofy premise, there have been opportunities for something interesting. Sadly, the film doesn’t even try to get there. Instead of attempting a philosophical exploration of death and life, “Flatliners” settles for being a poor, generic thriller without any real thrills. The film is completely forgettable and adds nothing new to the original movie.