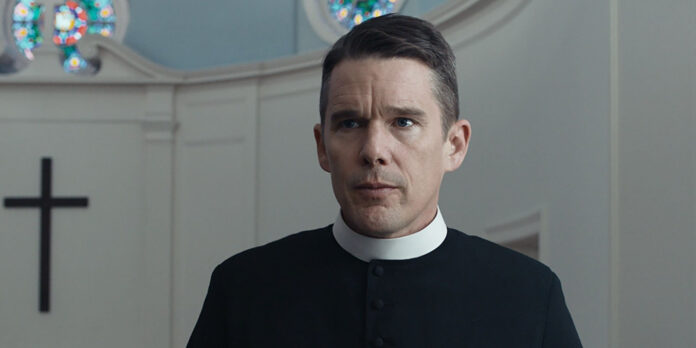 THE STORY – A former military chaplain is wracked by grief over the death of his son. Mary is a member of his church whose husband, a radical environmentalist, commits suicide, setting the plot in motion.

“First Reformed” is a dark and complex character study that only writer/director Paul Schrader (The writer of “Taxi Driver“) could have given us. With a morally complex character wrestling with humanity and faith, Schrader presents a flurry of interesting arguments, fears, and anxieties for the viewer that are hard to digest and may not go down so easily but once they do, you’re fully intellectually satisfied. People are always saying how they don’t want to mix politics and religion or how they don’t want to talk about climate change. Here is a film that not only dares to talk about it but it also takes us in directions that are even more troubling in an attempt for it to make its point.

Taking place in the present day somewhere in New York, Toller (Ethan Hawke) is the pastor of the Dutch colonial church approaching its 250 year anniversary called First Reformed church. At 46 years of age, Toller used to be in the military with a wife and son, but when his son is unexpectedly killed and his wife leaves him, he turns to God and discovers his faith. His faith, however, is tested when a visitor to his church named Mary (Amanda Seyfried) approaches him for guidance. Concerned about her boyfriend Michael (Phillip Ettinger) and his environmental activism, Mary asks Toller to speak with her husband in hopes that he will be able to set Michael’s mind straight.

The first element that needs to be addressed when discussing “First Reformed” is the remarkable performance by Ethan Hawke in the lead role as a pastor with a dark past and an even darker future. Why he turned to religion in his life is obvious. What is not so obvious, is how he can stand by his moral values and find a cause to believe in when humanity has given up on him and the very institution he is sworn to defend. Hawke turns in one of the best performances of his career as a man who is stuck somewhere between despair and hope. His character’s journey is one that makes perfect sense and would be a crime to spoil for those unaware of how dark the third act of this film becomes. The film talks about understanding the cause for which we are fighting for and the ramifications for fighting/believing in so said cause. Whether it’s for faith, humanity, country or self-interest, we are all living our lives every day, fighting for a cause. Schrader is interested in exploring the moral ambiguity behind fighting for these causes and its all personified in the inner turmoil found within Ethan Hawke’s pastor Toller.

The next element that needs to be addressed is how the film handles its message both on the page and screen by writer/director Paul Schrader. The message is one with some very muddy waters that was also addressed in Darren Aronofsky’s “Mother!.” The “debate” is both a very frighteningly real and spiritual one, with engaging dialogue that plays out almost like a play at times as Schrader films his characters in straight scenes with no camera tricks or artistic flourishes. Some may find the ambiguous nature of the film’s ending or its overall message to be troubling depending on their viewpoints but that is the point of the film. It wants to be confrontational, it wants to get in your face and ask questions that most are too afraid to answer. How people interpret the film’s ending will very much influence how they ultimately walk away from “First Reformed” feeling. Schrader does not make anything easy on his audience, nor should he and the result of which, allows for “First Reformed” to resonate even more so.

With a solid supporting cast (That also includes a surprisingly unfunny turn from Cedric The Entertainer), directorial decisions which help to elevate the screenplay, dark humor, challenging subject matter and a tremendous leading performance from Ethan Hawke, “First Reformed” is a solid faith-based film that defies expectation and looks to provoke its audience. For those moviegoers who are looking for challenging cinema that will not only provoke an emotional response but an intellectual one, “First Reformed” will certainly provide. Schrader has made many films throughout his career but this one has a general feeling that it may be his most important. Whether or not audiences will agree is another story but there is no denying his passion and talent on display in “First Reformed.”