“THE MOUNTAIN BETWEEN US” 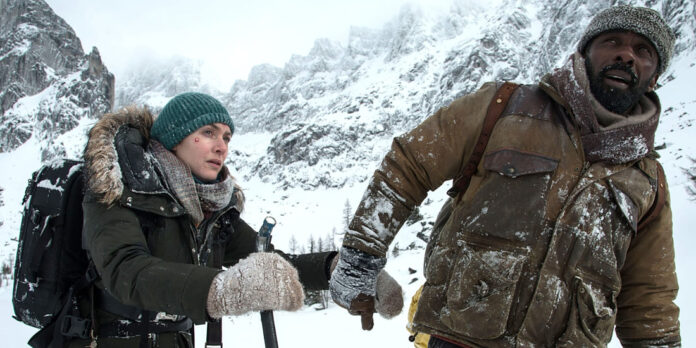 THE STORYStranded on a mountain after a tragic plane crash, two strangers must work together to endure the extreme elements of the remote, snow-covered terrain. Realizing that help is not on the way, they embark on a perilous journey across hundreds of miles of wilderness, pushing each other to survive and discovering their inner strength.

“The Mountain Between Us” is a run-of-the-mill love story with all the trappings of cynically manufactured romance, dressed up in a façade of snow and survival. The title could not be more transparent: The mountain is the obstacle that complicates the relationship between “us” – i.e. two protagonists and inevitable love interests played by handsome movie stars. The circumstances of being stranded high atop a mountain with a scarcity of food and resources would surely be terrifying in real life, but they serve as mere plot contrivances here, a way to let sparks fly between the two leads.

The plot is paper thin. Man meets woman. They hop on a plane. The plane crashes. The two strangers struggle to survive for weeks in the wilderness. Their shared experience bonds them together. This is a formula picture, with fewer surprises than a political stump speech. Kate Winslet and Idris Elba are not to blame. They are quintessential stars on screen. Their emotional dexterity, good looks, and easy charisma prevent the movie from veering into total monotony. “The Mountain Between Us” even gives the two actors some fascinating psychological material to work within the final twenty minutes or so. Ultimately, though, their talent is not enough to overcome dialogue such as “C’mon, Ben, let’s push through. We gotta take a risk. I didn’t come here to die.” That precise line is not spoken in the movie, but almost every utterance conveys something to that effect.

Even more disappointing than the screenplay is the fact that this movie was directed by Hany Abu-Assad, the Palestinian filmmaker whose 2005 movie, “Paradise Now,” remains a haunting masterwork. Assad squanders his skills with this vehicle, and he resorts to some laughable stylistic callbacks, including several close-ups of the protagonists’ opening their eyes after a night of freezing slumber. What these shots are meant to convey is unclear, but it seems to be an attempt by Abu-Assad to add a flourish to the proceedings. Awkwardly framed close-ups of Elba and Winslet comprise much of “The Mountain Between Us,” including a final sequence that had several audience members at my screening cackling.

There is nothing wrong with cinematic formula as long as it is well-executed and tied to some realm of narrative or emotional believability. Unfortunately, “The Mountain Between Us” suffers the double whammy of not appealing to logic or heart. In one scene, Winslet’s Alex chastises Elba’s Ben for always prioritizing strict logic over a more instinctual response. Ben scoffs at this criticism, as he believes that “the heart is just a muscle.” “The Mountain Between Us” operates in an unsatisfying middle ground between these two worldviews. The characters make decisions that would cause Ben anguish, while Alex would recognize the film’s heartstrings as what they really are – commercial calculations without a shred of authenticity.

THE GOOD – Winslet and Elba are an immensely likable duo. The film captures the winter freeze effectively.

THE BAD – Everything else.
​
THE OSCARS – None