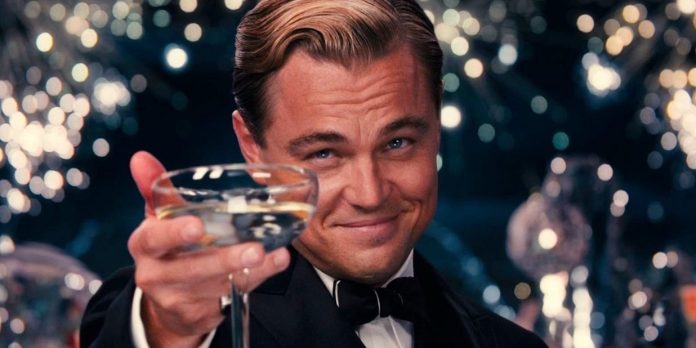 During this time of quarantine, I’ve found myself thinking about some of my favorite theatrical experiences. (I really miss going to the movies.) Seven years ago, at the start of summer blockbuster season, Baz Luhrmann’s ambitious adaptation of F. Scott Fitzgerald’s classic novel “The Great Gatsby” hit theaters. The film was met with a wildly mixed critical reaction. A common criticism was that it was “style over substance,” beautiful to look at but hollow at its core. I’ve always disagreed with this criticism of the film. Fitzgerald’s novel is among my favorite books; bringing such a classic novel to the big screen was never going to be an easy task. However, I want to look at how Luhrmann succeeded in his adaptation of “The Great Gatsby.” ​

THE PLOT
Most of us know the story of “The Great Gatsby.” It’s often an essential read for high school English. Whether you had to read it in school or picked it up on your own, it remains iconic for a reason. If you haven’t ever read the book, I’d highly recommend checking it out during the quarantine, then you can watch the movie afterward.

For those of us who have read Fitzgerald’s jazz-age tale, but need a refresher, a poor man named James Gatz (Gatsby) makes his way up in the world through questionable business dealings to impress Daisy Buchanan, the woman he loves. He buys a mansion in West Egg, New York, and throws wild parties hoping to impress her. The promise of the American Dream beckons Gatsby into a rags-to-riches tale of reinvention, but can he keep up with the roar of the 20s?

Luhrmann makes sure to stick to the source material without significant deviation. At the core, the adaptation serves as a beautiful snapshot of roaring 20s glamour only to slowly chip away at the shiny images on the screen with each passing scene. Behind the massive mansions, glamorous parties, and towers of champaign is the dark realization that the American Dream is an unattainable facade.

While many critics denounced the film for excessive visuals and shallow characters, the very point of Fitzgerald’s novel is to point out the excessive wealth and emptiness of the main characters.

Gatsby sits around his mansion, daydreaming about Daisy’s voice “full of money.” She is not truly the love of his life, rather a familiar face from his past that he can project all of his fantasies on to. Daisy hopes that her daughter will be a “beautiful little fool,” so she’ll be valued for her looks and blind to the rampant sexism and misogyny of the era. Daisy’s husband, Tom Buchanan, is the portrait of old money, an obnoxious man who thinks his wife will turn a blind eye towards his infidelity and brutish nature. These are vapid people or as Nick Carraway so clearly puts it “a rotten crowd.” “They smash up things and people and retreat into their vast carelessness.” Money, success, and power is their end goal, not the feelings of others.

The symbols and motifs of the novel are ever-present in the 2013 film.

The green light symbolizes Gatsby’s hopes for the future. It flashes through the murky shadows on the bay towards Daisy’s house every night. Unfortunately for Gatsby, these hopes can never truly be obtained; he reaches for something that is simply unobtainable. He believes the days of his romantic past with Daisy can repeat, but it’s an impossible feat. “You can’t repeat the past,” Nick tells him cautiously.

The billboard ad for optometrist Dr. TJ Eckleberg symbolizes the watchful eyes of God, viewing the character’s questionable decision making as they sink further into a hazy summer laced with bad decisions. 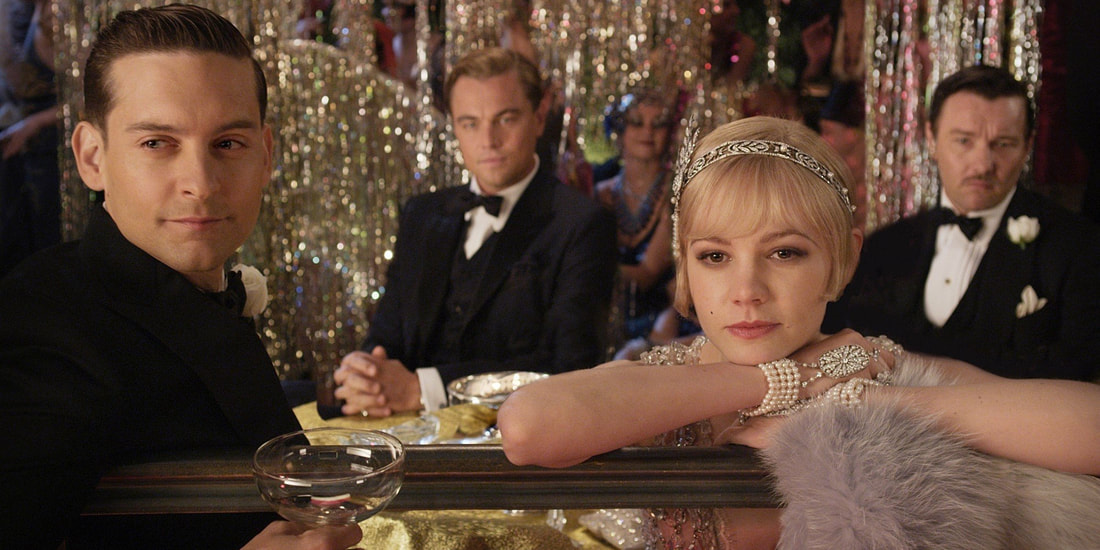 THE CAST
Casting is critical with a film of this magnitude. Robert Redford previously played Gatsby in the 1970s film. Who could be a better Gatsby for the 2010s than Leonardo DiCaprio? DiCaprio enters the film in a picture-perfect moment set to “Rhapsody in Blue” and accompanying fireworks behind him. The moment sets Gatsby up as a dreamlike hero, the man, the myth, and the legend. DiCaprio embodies the hope and naivete of Jay Gatsby, “the man in the cool, beautiful shirts.” However, Gatsby is just a front for the real James Gatz, a man clinging to the idea that Daisy might love him again like she once did in their youth. He clings to a sense of stability that eludes him. DiCaprio showcases the mystery, emotion, and even the rage of Gatsby. It’s a layered performance that’s among the actor’s more underrated performances.

Tobey Maguire is the film’s everyman, Nick Carraway, a writer who describes himself as “within and without.” He sees himself as an outsider of West Egg but participates in their activities. Maguire acts as an audience surrogate, viewing the lives of Gatsby and Daisy. Through him, we see the tragedy, triumph, and trauma of the story. Thankfully, he does not do the Spider-Man 3 dance in the film. This is one of his better performances. His friendship with Jay is endearing, probably because DiCaprio and McGuire have been friends for the majority of their lives.

Carey Mulligan turns in an equally fantastic performance as Daisy. Mulligan plays Daisy as innocent and tragic. Her childlike demeanor makes it easy to view her as a product of her circumstances. The “beautiful little fool” monologue is a pivotal moment that shows that she puts on a show for everyone but knows exactly what’s going on around her. However, as the film continues, we see she is just as toxic as her husband. There’s a darkness that hides behind her lace gowns and pearl necklaces.

THE STYLE
If you’ve ever watched a Baz Luhrmann film, you know there will be a strong emphasis on style and visuals. The one area of the film that I think everyone can agree was a rousing success is the stylistic aspect. “The Great Gatsby” took home two Oscars in 2014 for costume design and production design. It is gorgeous from start to finish capturing the essence of the roaring 20s. There’s plenty of glamour to go around from the wardrobe to the illustrious production design. Luhrmann makes sure that none of the space is wasted. Gatsby and Daisy’s meet up over tea is the perfect example of costume and production design merging beautifully. Every aspect of the set is filled from floor to ceiling with flowers as Gatsby nervously waits for Daisy to come to tea.

Of course, what would the film be without the parties? Each party sequence is an event in itself. There are fireworks, dancers, and singers on hand to entertain. It’s a kaleidoscopic display of extreme wealth. The infamous pool serves as a centerpiece of the film’s biggest moments, both triumphant and traumatic.

THE MUSIC
This has been one of the most debated topics since the film’s release. Instead of sticking to just jazz, which would have been the music of choice in the 1920s, the film contains an anachronistic soundtrack containing hip hop, R&B, and alternative from Jay-Z, Kanye West, and Lana Del Rey. (Jay-Z served as executive producer for the soundtrack) This isn’t a surprise coming from Baz Luhrmann. “Moulin Rouge” was set in 1900 and had music from Nirvana, Paul McCartney, and The Police. He isn’t one to hold back on bold musical choices.

For a jazz-age tale like “Gatsby,” many felt that this was taking things too far. I’d argue that it is the perfect choice of music. Part of Gatsby’s mysterious appeal is the wild parties thrown each weekend. These parties were meant to be grandiose and over-the-top. By putting in current music, it makes the audience feel like they are an attendee at one of Gatsby’s parties. It helps that many of the songs in the soundtrack like Lana Del Rey’s “Young and Beautiful” Will.i.am’s up-tempo “Bang Bang” and Emeli Sande’s reworked “Crazy In Love” have a jazz-age flair. Each song sounds current enough for today while mixing in sounds of the 1920s. The music in the film fits in perfectly with the party sequences, which were some of the boldest and most exciting scenes to watch on a cinema screen.

Despite its divisive nature, I have always been impressed with the 2013 film adaptation of “The Great Gatsby.” I can’t help but disagree with the “style over substance” criticism. In my opinion, Baz Luhrmann brought the novel to life brilliantly. A film adaption of “Gatsby” should showcase excessive parties and shallow characters because that’s the point. We need to see excessive parties and lavish mansions to understand the pinnacle of Gatsby and Daisy’s wealth. The characters are not glorified but serve as a warning. Behind the glittering parties, beautiful costumes, and the watchful eyes of T.J. Eckleberg lies a story about one man’s misplaced hope and the decay of the American Dream.

Be sure to check out the Next Best Adaptation Podcast for more on literary classics that will become film adaptations! What do you think of “The Great Gatsby” and its adaptations? Let us know your thoughts in the comments section below or on our Twitter account.