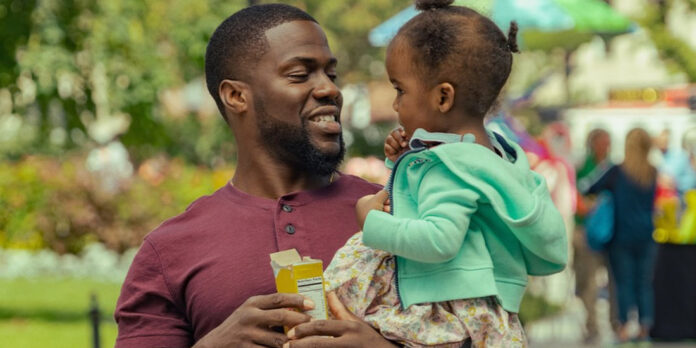 THE STORY – A father brings up his baby girl as a single dad after the unexpected death of his wife, who died a day after their daughter’s birth.

It’s always a risk when a comedian takes on a dramatic role. For every Robin Williams in “Good Will Hunting,” Jim Carrey in “Eternal Sunshine of the Spotless Mind,” or Melissa McCarthy in “Can You Ever Forgive Me?” there’s a Vince Vaughn in “Psycho” or Ashton Kutcher in “Jobs.” Therefore, you’d be forgiven if you took a look at the tear-jerking premise of Netflix’s “Fatherhood” and felt that Kevin Hart might not have the acting chops to properly convey the range of emotions asked of him when sharing the true story of a single father who struggles to raise his daughter after the unexpected death of his wife. Granted, this isn’t Hart’s first foray into drama – having starred alongside Bryan Cranston in 2019’s “The Upside” – but “Fatherhood” is even more of an emotional powerhouse than that “The Intouchables” remake, and this time around, Hart is asked to carry the entire film on his shoulders. Sure, he’s surrounded by quite a stellar supporting cast (featuring the always-hysterical Lil Rel Howery and the astounding Alfre Woodard), but otherwise, this is Hart’s show through and through. And is he up to the task?

“Fatherhood” starts almost immediately after the story’s central tragedy has taken place, briefly flashing back in time to reveal the romance between Hart’s Matthew and Deborah Ayorinde’s Liz and the birth of their daughter Maddy (Melody Hurd) before Liz shockingly passes away soon after. As Matt navigates his grief and looks after a newborn simultaneously, he finds himself overwhelmed by being suddenly asked to take on the responsibilities of a single parent, and it doesn’t help that his hyper-critical mother-in-law Marian (Alfre Woodard) thinks he’s incapable of completing even the simplest of tasks. However, with help from his friends Jordan (Lil Rel Howery) and Oscar (Anthony Carrigan) and unwavering devotion to being the best dad possible for Maddy, Matt starts to get the swing of things, and it seems as if his life can get back on track. Unfortunately, when faced with woes at work, setbacks at Maddy’s school, and a potentially rewarding relationship with another Liz (DeWanda Wise), Matt’s carefully curated life hits a bit of a speed bump. He’s asked to reassess his priorities as a parent, balancing his own personal wants and needs alongside his dedication to his daughter.

In many ways, our perception of Hart in this part mirrors the obstacles that Matt encounters throughout the movie. Left-and-right, friends and family continually doubt Matt’s ability to adequately provide for Maddy, just as many audience members may question the durability of Hart’s dramatic acting chops. And, much like Matt, Hart manages to prove us all wrong, turning in what very well may be the best work of his entire career so far with a subtle and stirring lead performance that strays from his oft-used exaggerated theatricality (seen in films such as “Jumanji” or “Ride Along”) and taps into something far more textured and touching. Every emotion expressed by Hart throughout the film is earned – from the heartbreak upon hearing of his wife’s passing to the pleasure of playing with his daughter in a park to the liveliness felt in the presence of new love – and he anchors his character arc in admirable authenticity, holding back humor only for the scenes where they fit instead of using comedy as a crutch in the moments that demand more of him as an actor, as some do. Even in “The Upside,” Hart never dug into the thematic depths he reaches here, and there’s genuinely nothing in his filmography thus far that compares to the powerful part he pulls off in “Fatherhood.”

Hart benefits immensely from being surrounded by an expertly cast ensemble, which features several familiar faces who all play their roles to near-perfection, fully realizing their roles in Hart’s Matt’s life and leaving a lasting impression no matter how small their screen time. Woodard is perhaps the most affecting actor in the supporting cast, serving as a foil of sorts as she butts heads with Matt over the best way to raise Maddy but also rooting her character in a rich and resonant reservoir of emotion resulting from her perpetual pain over her late daughter’s death. She may at times seem like an “antagonist” in this story, but Woodard’s layered portrayal makes Marian a far more complicated – and compelling – figure. As expected, the hilarious Lil Rel Howery and ever-amusing Anthony Carrigan are riotous comic relief, but they do deliver when featured in more dramatic beats as well, providing plentiful emotional support to their pal. Wise, meanwhile, is an immensely engaging love interest for Hart, and their convincing chemistry sells their storyline the whole way through. Most of all, though, young Melody Hurd is the supporting star best capable of competing with Hart’s charm, instantly earning our affection as soon as she appears onscreen as the manic and magnetizing Maddy and constantly conveying a maturity far beyond her years.

If “Fatherhood” ever stumbles at all, it’s due to its script, written by Paul Weitz and Dana Stevens and adapted from the real Matthew Logelin’s 2011 memoir “Two Kisses for Maddy: A Memoir of Loss and Love.” While there are no significant shortcomings with the film’s story, its plot is pretty predictable. There are little shocks or surprises along the way, which can make the 110-minute feature feel a bit longer than it is, especially as it reaches its conventional – albeit cute – conclusion. Nonetheless, even with these stereotypical story beats in mind, “Fatherhood” is elevated so much by its ensemble – and Kevin Hart, in particular – that it’s able to counteract these critiques mostly. Its honesty when painting the ups and downs of parenthood is so honorable that it’s hard to imagine viewers not being swept up by the sincerity of the entire affair. “Fatherhood” may follow a story template we’ve seen many times before, but it’s an emotional rollercoaster worth riding nonetheless, especially for the poignant performances from every actor involved.