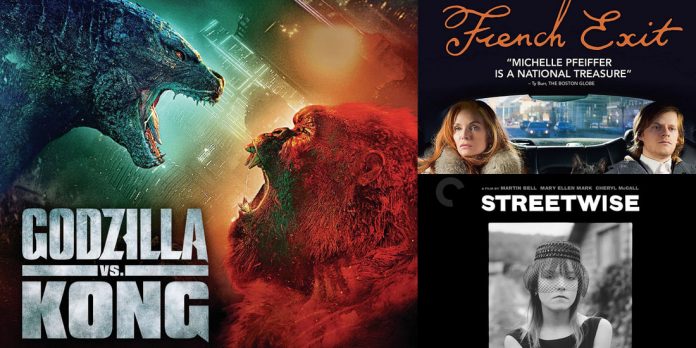 This week, we have some exciting new releases coming to the world of Blu-ray, plus some new releases and 90s films arriving on 4K and hidden gems from a couple of favorite boutique labels!​

​From the Paramount Presents label comes the 1959 western “Last Train from Gun Hill,” directed by John Sturges and starring Kirk Douglas and Anthony Quinn. This features a new 6K restoration of the film from the original VistaVision negative. It includes a filmmaker focus talkback with Leonard Maltin.

​The Criterion Collection is releasing a double release for the films “Streetwise” and “Tiny: The Life of Erin Blackwell,” the 1984 documentary and its 2016 follow-up from director Martin Bell, photographer Mary Ellen Mark, and journalist Cheryl McCall. “Streetwise” depicts the lives of homeless and runaway teens in 1980s Seattle, with “Tiny: The Life of Erin Blackwell” following one of the subjects from the original film up to the present day. For “Streetwise,” there is a new audio commentary track with Bell. Also included are interviews with Bell and “Streetwise” editor Nancy Baker, along with four of Bell’s short films.

​
​Finally, we have two releases from the Warner Archive Collection. The first is the 1968 film “Guns for San Sebastian,” directed by Henri Verneuil and starring Anthony Quinn, Anjanette Comer, and Charles Bronson. It includes a vintage featurette. The other release is the 1945 technicolor musical “Ziegfeld Follies,” which consists of an all-star cast and several prominent directors paying homage to the iconic Broadway producer. The film features Fred Astaire, Red Skelton, Esther Williams, Lena Horne, Judy Garland, Gene Kelly, and many more.

​This week, I’ve been on a major Beatles kick, going through and listening to all of their albums in order (they’re my favorite band, I do this semi-annually, yes, I’m very basic) and have been looking into Beatles films. An underrated one that doesn’t directly portray the Fab Four in a biopic sense but is nonetheless so much about their impact is the 1978 film “I Wanna Hold Your Hand,” which has a terrific release from the Criterion Collection. This was the directing debut of Robert Zemeckis and co-written by him, and Bob Gale; their partnership is most known for creating the “Back to the Future” trilogy, and this film is much more similar to those than Zemeckis’ recent works. The film was also executive-produced by none other than Steven Spielberg. It stars Nancy Allen, Bobby Di Cicco, Marc McClure, Susan Kendall Newman, Theresa Saldana, Wendie Jo Sperber, and Eddie Deezen. It depicts a group of teenagers trying to see The Beatles’ famous performance on “The Ed Sullivan Show” in 1964 and perfectly depicts varying degrees of Beatlemania craziness. The biggest selling point about this film is that, because of when it was made, there are SEVENTEEN Beatles songs featured throughout the film. It’s commonly known today that getting the rights to use Beatles songs in movies or television is crazy expensive, so most use covers. So, to have a film with so many feels otherworldly, and you cannot imagine the movie without it. It’s also probably why the film is unavailable on streaming, making home video really the only way of viewing it.

The Blu-ray looks incredible, featuring a new 4K digital restoration approved by Zemeckis and Gale. It also includes an interview conversation with Zemeckis, Gale, and Spielberg, interviews with Allen and McClure, an audio commentary track from 2004 with Zemeckis and Gale, and two of Zemeckis’ early short films. I would highly recommend this film to Beatles fans, fans of Zemeckis’ earlier films, or fans of teen films like this in general; it reminded me of many movies like “American Graffiti” and “Dazed and Confused.” I would also highly recommend picking it up in the upcoming Criterion Barnes & Noble sale in July.