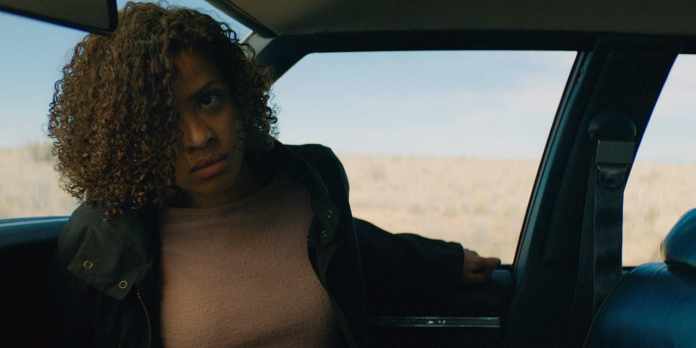 THE STORY – Hunted by mysterious forces, a young woman who has supernatural abilities must go on the run when her powers are discovered. With nowhere else to go, she flees back to her family and the farmhouse she abandoned long ago. There, while being pursued by the local sheriff, she begins to mend the broken relationships with her mother and daughter and learns that the power she needed was inside her all along.​
​
THE CAST – Gugu Mbatha-Raw, Lorraine Toussaint, Saniyya Sidney, Christopher Denham & David Strathairn

​​​Walking into “Fast Color,” I knew virtually nothing about it other than it was an independent film starring Gugu Mbatha-Raw (“The Cloverfield Paradox” & “A Wrinkle In Time“) and directed by Julia Hart, who impressed a lot of us with her directorial debut film “Miss Stevens.” And I maintain that the less you know about “Fast Color” heading into it, the better. Hart’s mysterious film starts off with a dangerous backdrop, an unknown protagonist with special powers and slowly unravels its central mystery, all the while hiding its true nature from all of us and reveling in the fact that it’s a beautifully told story about three generations of POC women.

It’s been 8 years since it rained on the Earth. The planet is completely dry with no growth. The price of water has skyrocketed and the manner in which humanity now lives is definitely different but still grounded in reality by writer/director Julia Hart. Ruth (Gugu Mbatha-Raw) is on the run across the desert landscape outside of a rural town from a government official named Bill (Christopher Denham), but why? what does he want with her? Could it be that at seemingly random moments, she has the ability to shift the earth’s plates and cause earthquakes? Perhaps. Perhaps there is more to it than that. We get to know Ruth better, as she seeks refuge on her mother’s property (Lorraine Toussaint) and re-connects with her daughter Lila (Saniyya Sidney), as the town’s county sheriff (David Strathairn ) is also in pursuit but for a different purpose than Bill’s.

The plot of “Fast Color” is certainly unique and feels very exciting at times as we follow three generations of POC women, the gifts they carry, what those gifts mean to each of them and what they mean to each other. The plot starts off with a ton of mystery and virtually no backstory as we’re forced to fill in the blanks of Ruth’s journey rather than wait patiently for Julia Hart to clue us in herself. I say this because by the time Ruth reaches her mother’s home in Act II, the energy of the film takes a downturn and suffers from pacing issues that it’s not fully able to recover from despite an emotionally poignant third act.

The performances by each of the leading ladies and the emotion they bring to each of their roles is certainly heartfelt and helps to add a lot to the shaky plot. The visual effects, of which there are a surprisingly great deal of, are simple but effective and the score by Rob Simonsen might be the film’s best technical asset as it ignites a sense of wonder and sheer epicness as the story goes from post-apocalyptic thriller to small-scale intimate drama to superhero origin story? Yeah, you heard me right. This film has more than a few surprises in store for audiences able to seek it out.

Will there be a sequel to “Fast Color?” I’m not sure but I really hope so, for I believe “Fast Color” has a ton of potential to tell us a different take on the superhero genre in the independent space from vastly different perspectives than what the genre is used to. I appreciate Hart’s ambition despite the sloppy execution at times in the film’s pacing. Her narrative certainly starts off and ends very strong but as a character says in the film at one point, “if something is broken, it stays broken.” Let’s hope this is not the end for the fascinating female characters introduced in this movie and we can continue to see their stories unfold.