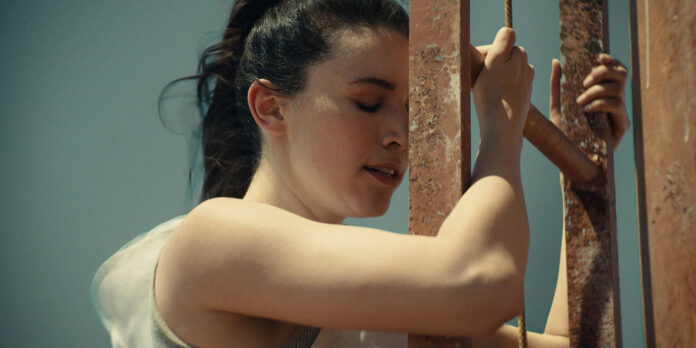 THE STORY – For best friends Becky and Hunter, life is all about conquering fears and pushing limits. However, after they climb 2,000 feet to the top of a remote, abandoned radio tower, they find themselves stranded with no way down. Now, their expert climbing skills are put to the ultimate test as they desperately fight to survive the elements, a lack of supplies, and vertigo-inducing heights.

​Not that any film should have a time limit based on its genre, style, and/or budget, but look at any promo material for Scott Mann’s survival drama “Fall” – even a synopsis! – and you’d expect it to be not too much longer than 90 minutes. And lo, the film reaches a perfect conclusion at right about that length… and then decides to screw that ending because it hasn’t gone through every single possible thing it could do with this scenario, and why stop now when it could milk another fifteen minutes out of it? But in so doing, it turns what could have been a fun, perfectly thrilling (if not quite perfect) little b-movie into something ugly, ungainly, and unworthy of the investment of its audience. In its last act, it suddenly becomes the worst version of itself.

“Fall” has what you might call a “classic” setup if you were feeling generous: After losing her husband Dan (Mason Gooding) in a tragic rock climbing accident, Becky (Grace Caroline Currey) is living from bottle to bottle. Her father (Jeffrey Dean Morgan) is worried about her, but she pushes him away. Then her best friend Hunter (Virginia Gardner), who has spent the year since the accident traveling around the world chasing dangerous climbs, shows up out of nowhere and convinces Becky to join her in her latest expedition: Climbing the B67 radio tower – a 2,000-foot ladder climb off the ground – and scattering Dan’s ashes off the top. Becky lets herself be convinced by Hunter’s forceful personality and exhortations to not give in to the fear and climbs the rusty tower in the middle of nowhere against her better judgment. But after they make it to the top and start to climb back down, the ladder gives way, stranding the girls at the very top with no cell signal, no cover from the elements, and their bag of supplies a significant drop away, on a platform just big enough for the two of them.

This is an excellent setup for a no-frills exercise in tension, and it delivers what it promises for most of the film. The characters are sketches, and the inevitable drama that comes between them is overly contrived, even for a low-budget survival thriller like this. Currey and Gardner serve the script as best they can; they may not be able to make the moments where they literally describe to each other what they’re doing or are about to do sound believable, but when the script calls for big emotions, they go all in, making it easy to root for these girls even when they do some incredibly foolish things (like climb a rusty abandoned tower in the middle of nowhere without telling anyone where they’re going, but hey, there wouldn’t be a movie otherwise, so we’ll let that one slide). Mann wrings every ounce of tension he can out of every moment, often lingering on a loose screw, rattling bar, or swinging rope just long enough to convey the danger of the situation. The vertiginous cinematography by MacGregor will constantly send a chill down the spine of anyone who has even the slightest fear of heights (seeing this on a big screen will make you want to curl up into the fetal position early on and stay there). The editing by Robert Hall effectively raises the stakes with each cut. Tim Despic’s percussive score might be gilding the lily, but at least it does a decent job of quickening the pulse.

The problem is that there’s only so far you can go with a premise like this before the contrivances that keep it going become too much to bear. Mann and co-writer Jonathan Frank clearly wanted to have their cake and eat it too and extend the last act far beyond its breaking point, stuffing the film’s final fifteen minutes full of ever more ridiculous contrivances. This section of the film is, by a considerable margin, the most bloody, brutal, and unnecessary. By the time we get to the inevitable end, the film seems to be saying that the only way to get past terrible trauma is to go through even worse trauma, and that’s disingenuous at best. Ending the film this way isn’t just disappointing; it’s maddening because up until that point, “Fall” has the goods to be a tight, effective survivalist thriller. It feels as though the filmmakers, seeing how good what they had was, got cocky and decided to push their characters and their audience beyond the brink just because they could. Unfortunately, Mann and Frank got too big for their britches and ended up pushing the whole movie over the edge and into the abyss. “Fall” could have been a nice late summer chiller, but instead, it’s DOA.