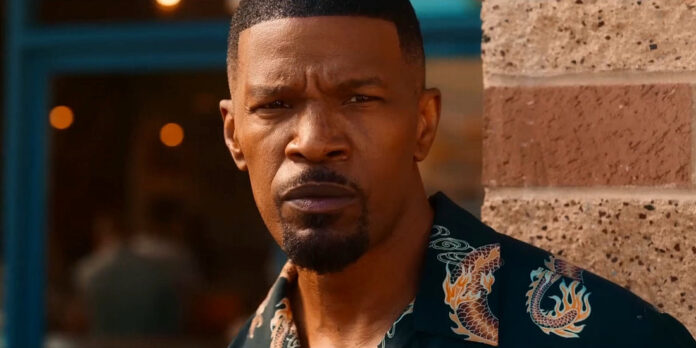 THE STORY – A hardworking dad out to provide for his daughter uses a boring pool-cleaning job as a front for his real gig: hunting and killing vampires.

​Horror can be an interesting genre for no reason other than its mailability. There is a wide range of topics and themes it can mine, which can be serious emotional explorations or silly romps meant solely to be enjoyed for the spectacle. In this regard, the mixture of action and comedy can be an effective recipe for a delightful presentation that indulges in the violent thrills of frights and adventure with enough of a humorous touch to maintain the sense of fun. All of those elements are at play within “Day Shift,” which may not find itself to be an exceptional work but narrowly manages to get by as a watchable endeavor.

When placed in a world in which vampires exist, one would imagine there would be those who take it upon themselves to expel such creatures from existence. That is the job of Bud Jablonski (Jamie Foxx), a skilled hunter of the undead who is also desperately trying to reassemble his broken life. With his estranged wife threatening to move out of state with his daughter, he tirelessly works to raise the funds that would persuade her to stay. The only way to do that is to rejoin the secret bureaucracy that regulates the slaying of vampires, of which he was thrown out. Timid union representative Seth (Dave Franco) is assigned to oversee any potential violations Bud commits in the field. Still, both are drawn into a more dangerous plot concerning an uber-vampire (Karla Souza) with plans of global domination. It is a race to save humanity from the evil that hides in every shadow.

J.J. Perry makes his directorial debut here after previously being well-established as a stunt performer and coordinator. This certainly gives him an advantage for crafting sequences that require the flamboyant choreography to shine, and there are several moments in which the set pieces are impressive. They are especially compelling in a raid set in a large house, where the chaotic energy is frenzied but also captivating. Unfortunately, his style of filmmaking is inconsistent in maintaining that engagement throughout, as other scenes are messier in a less dynamic fashion. At the same time, Perry shows competency in delivering extravagant displays that are riveting to watch for their entertaining showcase.

The screenplay from Tyler Tice and Shay Hatten is the source of less successful efforts. While there is a solid enough foundation to build from, the set-up of the exact rules of this environment are never made abundantly clear. Some of the details of this reality are thorough and nicely textured, while most are merely vague allusions to a bigger conspiracy that are just muddled and uninteresting. The motivations for the characters are stale and wooden, with the main thrust of the plot a dull, poorly executed enterprise. Even the instances of levity are a hit or miss, with a ratio that leans more towards the latter. While the writing is not meant to be the focal point, its mundane depiction leaves much to be desired.

Foxx has always presented an easy-going, inviting persona that is well-suited for this type of genre. While no one would argue that he is doing career-best work, he does offer a nice anchor for the film and commands his screen time with an appropriate physicality. The witticisms don’t always land, but Foxx makes the most to force their impact. Franco has the more endearing role and manages to create a charming portrait of a character that, again, is by no means nuanced but often engrossing through his natural personality. That’s about the extent to which this ensemble makes an imprint, particularly as Souza barely registers as the principal antagonist, hindered mostly by the weak material. Snoop Dogg appears as a grizzled hunter who is an old friend of Bud and provides an alluring charisma that is disposable yet delightful.

Despite the somewhat intriguing concept, there is not much in “Day Shift” that makes it a unique enough experience to warrant high praise. The moments of action mayhem are satisfying overall, even if they lack the consistency to be thoroughly stimulating. The performances are not specifically noteworthy, but the cast is suitable enough to carry the tasks at hand. It really is the writing that weighs down most of the film’s highlights, as the hollow and flat revelations in the narrative only serve to progress the plot forward with little creative innovation. Still, the collection of what is enjoyable is just enough to appreciate it for the most basic of merits. It’s not the best this mashup of subgenres under the horror umbrella can offer, but one could do much worse.