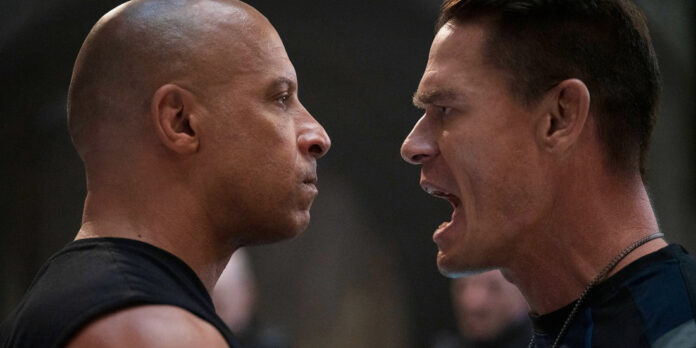 ​​”The Fast And The Furious” franchise, otherwise known now as “The Fast Saga,” has seen many directors come and go throughout its lifespan. Different directors bring certain qualities in how they tell the stories and shoot the action. Still, this global hit franchise has always come back to certain core qualities, mainly the theme of family and cars, lots and lots of cars. We’ve come a long way from the early days when the Toretto gang was stealing DVD players off the back of transportation trucks. Now, the characters we’ve come to love over the years are taking the franchise to places they’ve never gone to before, including space (yes, really) and, unfortunately, new lows for the franchise overall. Longtime fans of the franchise may have thought that returning director Justin Lin (“Tokyo Drift,” “Fast & Furious,” “Fast Five” & “Fast & Furious 6”) would find a way to re-invent the series again in its ninth chronological installment (tenth film overall) but instead, “F9” is a rehash of similar themes, recycled jokes and even more over the top ridiculousness that has finally pushed this particular fan of the franchise to his breaking point.

Following the events of “The Fate Of The Furious,” Dom Toretto (Vin Diesel) is living a secluded and peaceful life off the grid with Letty (Micelle Rodriguez) and his son, little Brian. When the crew comes to him with a new mission, Dom wants to get out of the life like Brian (the dearly departed Paul Walker) and his sister Mia (Jordanna Brewster) did. However, Dom’s estranged brother Jakob (John Cena) is involved in a plot to take over the world, which pulls Dom in deeper than he’s ever been gone before, forcing him to confront the family of his past with the family of his present by his side.

At this stage in the franchise (“supposedly” coming to an end after two more installments), the formula for what made these films more successful than ever before, starting with “Fast Five,” is in desperate need of re-modeling. “F9” presents nothing new other than the introduction of John Cena’s Jakob Toretto to the story (perhaps in a self-aware move to replace the giant gaping hole in this franchise that was Dwayne Johnson, who exited due to personal problems with his co-star, Vin Diesel). We’re still receiving preachy monologues about the importance of family. We’re still watching the gang sip on Corona Beer. We’re still listening to Tej and Roman remark at how absurd the team’s antics and adventures are increasingly becoming.

It’s all content we’ve seen before. And now, with so many characters introduced throughout these last few films, including Ramsey (Nathalie Emmanuel), “Queenie” Shaw (Helen Mirren), Mr. Nobody (Kurt Russell), and Cipher (Charlize Theron), and the re-introduction of fan-favorite characters such as Mia Toretto (Jordana Brewster) and Han Lue (Sung Kang), the franchise has had no choice but to increase the runtime, making this the most extended entry in the franchise yet at nearly two and half hours long. For a film with not much to say, or sadly even offer in terms of the action sequences due to the lack of any life-or-death stakes, it all results in an overstuffed, overdone chore of a film that doesn’t push the franchise forward but instead, stalls it out. When you have to resort to literally sending your characters to space for their increasingly bigger and unrealistic missions to drive audience interest, you’ve lost your grip on what made this franchise strike a chord with audiences all over the world: the characters.

There are too many characters now, and the franchise’s unwillingness to kill anyone off has finally caught up with it. Some will say that this happened many films ago or with the last one, but I was still along for the ride up until now. Now, it’s unavoidable. Tyrese Gibson’s Ramon experiences more than one near-death experience in this movie, but the franchise is too concerned with pleasing their fanbase to give his character any kind of a meaningful arc which would inject this franchise with some much-needed new emotion and stakes. Otherwise, we’re watching these ordinary people act like invincible superheroes who are impervious to death, pain, or any form of bodily injury whatsoever, and the suspension of disbelief has finally worn off. Even self-aware lines of dialogue like, “As long as we obey the laws of physics, we’ll be fine” are meant to be taken as jokes, but instead, it’s sending a message to the audience that these characters have the thickest amount of plot armor compared to any other action-franchise out there (yes, even more than Marvel).

There are still some distinctive moments within “F9” that make it somewhat stand out amongst other films in the franchise. Even though it’s heavy-handed and hard to believe, the introduction of Jakob as Dom’s hostile younger brother, who we’ve never heard of up until this moment, through the use of grainy flashbacks (possibly shot on film?) back to 1989 with younger actors playing the two brothers (Vinnie Bennett as Dom and Finn Cole as Jakob) does help to give the movie its own identity. We learn about Dom’s relationship with his father, who tragically died on the racetrack many years ago, and even though it’s been beaten to death by this point in the franchise, the further exploration of Dom’s “family” is in keeping with the themes of the franchise at least.

John Cena does precisely what you hire John Cena to do in an action property such as this, physically speaking. However, he’s shown that he also can be quite a gifted comedic actor (“Blockers“). Unfortunately, his dramatic skills are not as impressive, and this role requires him to flex those unique muscles in his arsenal. The result is many unintentionally laughable moments of forced drama and a level of emotional complexity that devalues the character’s put-on badassery as a lethal assassin and spy. Thue Ersted Rasmussen’s Otto is introduced as a new villain who is a “spoiled rich prick that wants to rule the world.” Still, once he comes across Theron’s Cipher and gets completely emasculated by her with an awfully written Star Wars joke, it belittles him to exactly that, a joke. As mentioned earlier, the franchise’s unwillingness to put our heroes in any real sense of danger or even give them formidable antagonists is a real blunder to this franchise that will hopefully be course-corrected with the remaining installments.

Despite the bizarre reveals, lack of stakes, and long stretches of disbelief, everyone just wants to know, how is the action? How are the stunts? I could be wrong, but there are so many cars that get flipped, destroyed, and barrel-rolled into oblivion in this movie that I think this might hold the record for most cars destroyed in a single film? The final sequence involving super magnets to pull in and push out various objects, including vehicles, down the street is fun and exhilarating to watch when it’s using practical effects and not relying heavily on CGI. The same goes for an earlier sequence involving the crew driving through a minefield in a jungle. However, when the CGI is utilized, there’s no denying that it looks cheap and further robs each action sequence of any potential danger for these characters. The jokes have become repetitive and unfunny. The action has become too ridiculous for us to be emotionally invested anymore. The runtime and plot has become so bloated that this franchise is now running on empty gas. Sometimes “family” and fast cars just aren’t enough. For a franchise that calls itself “fast” and “furious,” it’s no longer either of those things.