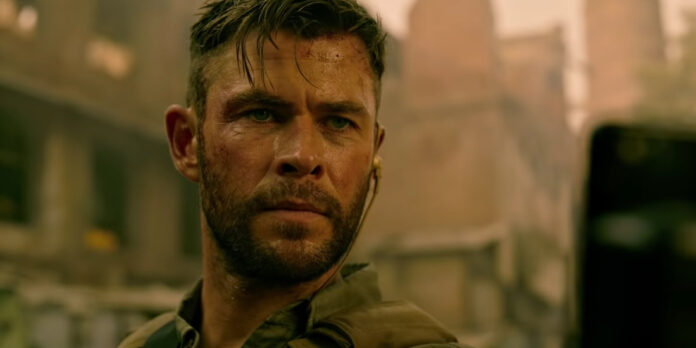 THE STORY – A black-market mercenary who has nothing to lose is hired to rescue the kidnapped son of an imprisoned international crime lord. But in the murky underworld of weapons dealers and drug traffickers, an already deadly mission approaches the impossible.
​
THE CAST – Chris Hemsworth, Rudhraksh Jaiswal, Randeep Hooda, Golshifteh Farahani, Pankaj Tripathi, Priyanshu Painyuli & David Harbour

​​​​​For years video games strove to reach a certain level of realism that allows players to fall into the world they are exploring. We have now reached a point where game makers have become so good at it that certain games feel like movies, which can be fantastic. Unfortunately, it rarely works well when the situation is reversed, and a film feels like a video game. From the frenetic action scenes that often mimic a 3rd person over the shoulder viewpoint to the predictable script and characters, “Extraction” lands squarely within this territory.

Set in the bustling city of Dhaka in Bangladesh, Ovi (Rudhraksh Jaiswal) is the teenage son of an imprisoned, but still powerful, crime lord. When a rival snatches the boy, the crime lord tasks his head employee, Saju (Randeep Hooda) with rescuing him alive or facing dire consequences. Saju calls in a team of professionals to assist with getting the boy back and despondent mercenary Tyler (Chris Hemsworth), is tasked with being the man on the ground to bring the boy in. Things go wildly wrong within the first ten minutes of the job, as it quickly becomes clear that there is more going on than the team was initially told.
​
Tyler is left with limited resources and a seeming army of men chasing him and Ovi across the city while he scrambles to find them a way out and stay alive. While Tyler and Ovi are being pursued, the rival kingpin Amir (Priyanshi Painyuli) is raging at his staff about his missing kidnapped victim. From the group of children he has working for him, to the long term enforcers he terrorizes and demands with quiet violence and ruthless efficiency, hoping to recover Ovi before he can escape for good. As Tyler’s options continue to dwindle, he grows desperate and is forced to make hard decisions about who will survive this job.

Technically, “Extraction” is a seriously mixed bag. The cinematography is interesting, and it avoids the common editing mistake of thinking fast cuts are the way to make an action scene exciting. Instead, it chooses to use a handheld camera and stays close to the actors, giving each scene an intensity that doesn’t come through in wide shots. It also takes advantage of the setting by shooting in the crowded streets and cramped apartment buildings spread throughout the city, as well as the gorgeous wildlands that exist just outside the bounds of the metropolis. Sadly, the sound doesn’t come anywhere near the visuals. The sound mixing is atrocious, with the dialogue being lower than I have heard in a long time in comparison to the overblown sound effects and background noise. Subtitles were necessary in order to watch it without constantly adjusting the volume, but even with them, it was still a frustrating watch because of the sudden changes in sound quality.

Chris Hemsworth has proven himself to be a good actor who can work with a wide variety of material, but he is at his best when his comedic sensibilities and irreverent style are given free rein. Considering he is the clear draw to this film, it’s so unfortunate that his character has such little depth. Tyler is almost an archetype with how closely he hues to obvious tropes and the deep grief that is meant to make us empathize with him instead feels tired and predictable because of how clearly the film broadcasts it from the beginning. All of the other characters are paper-thin and while the actors do a fine job they are limited by the script. The only exception to this was Rudhraksh Jaiswal as Ovi. His acting skills allowed him to surpass those limits and humanize the privileged child of a crime lord.

“Extraction” is fun and easy to watch. It offers nothing revelatory or new, but it also doesn’t fall into the common traps of cookie-cutter action movies. It embraces the gory nature of the genre but would be much better served with practical effects rather than average CGI it uses which ends up contributing to how much it feels like a video game. While it is beautiful to watch, the style also feels too similar to most current military based video games. The handheld camera enhances the intensity but also mimics the feel of playing through an encounter with an enemy. The poor sound editing significantly detracts from the experience of watching and the lack of character development leaves the story flat and uninteresting. “Extraction” is worth watching for those who are action junkies, but for the casual viewer, it will probably leave something to be desired.