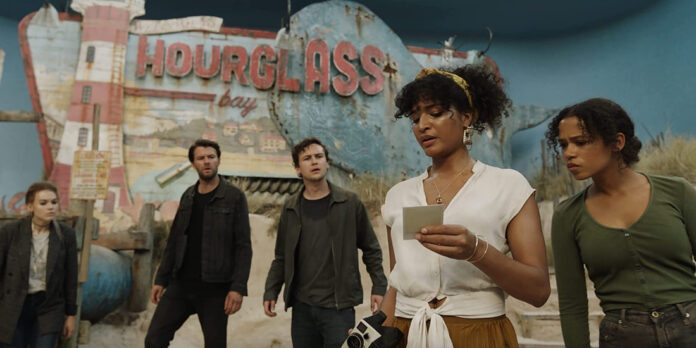 THE STORY – Survivors of previous escape rooms find themselves in a new and increasingly elaborate game filled with deadly traps.

​​Released in 2019, “Escape Room” is one of the better first-week-of-January dumps in recent memory – a completely unrepentant funhouse ride with killer production design and tight thriller filmmaking. Ending with a protracted sequel hook was perhaps a bit optimistic (and more than a little tacky). Still, the film exceeded expectations at the box office (a worldwide gross of over $150 million against a $9 million budget). So, here we are – a sequel with a bigger budget and prime summer release date. In the tradition of any good franchise sequel, “Escape Room: Tournament of Champions” keeps the same formula as the first while making everything bigger with more elaborate, expensive-looking versions of what made the first so successful. The surprising thing is that it actually works.

One of the most endearing things about “Escape Room” is that it had no aspirations to be anything other than a grotty little B-movie. Its storytelling and character development were purely functional, a rail-thin skeleton on which to hang increasingly elaborate room design and puzzles for the characters to solve. The storytelling in “Tournament of Champions” is just as functional, even beginning with a handy (if silly) little recap of the first film just in case you forgot what happened and/or dragged a friend who hadn’t seen it with you. From there, we catch up with Zoey (Taylor Russell) and Ben (Logan Miller), the first film’s survivors who are dealing with their PTSD in different ways. Ben is having claustrophobic nightmares, while Zoey’s therapist is trying to help her get over all of her fears, especially her fear of flying. They drive to New York to scope out the headquarters of the mysterious Minos Corporation that designed their death trap-filled escape room. After chasing a pickpocket into the subway, they find themselves, along with four other survivors, in a subway car that separates from the rest of the train to reveal itself as another Minos-designed escape room. They all know the stakes, but they also know what they’re up against. Will any of them be able to make it out alive?

While the characters in the first film had backstories to flesh out the mystery of why they were all there, this time around, there’s no time for such niceties. Everyone gets one detail from which to build their character. There’s the scarred travel blogger (Indya Moore), the priest who’s now suffering a crisis of faith (Thomas Cocquerel), the guy who’s always late (Carlito Olivero), and the badass-looking chick who suffers from congenital insensitivity to pain (Holland Roden). But no one goes to a movie with “Escape Room” in the title for the characters. They go for the rooms, and they are absolutely worth the price of admission. While nothing here has the playfulness of the first’s upside-down billiard club room, they’re all more viscerally dangerous with more intricate puzzles – as is befitting for a series of escape rooms specifically designed for those who survived one series of them already. This isn’t about the characters getting to know each other, it’s about them getting out alive, and director Adam Robitel stages each scene to achieve maximum tension (aided, as in the first, by Brian Tyler and John Carey’s pulse-pounding techno score). “Tournament of Champions” isn’t as cleanly edited as the first; one gets the feeling that Robitel and returning editor Steve Mirkovich are a bit overly excited by the bigger budget and visual effects and want to transfer that excitement to the audience by increasing the number of cuts tenfold. Sadly, that only serves to make it more difficult to make out what’s happening, especially when combined with the occasionally muddy sound mix.

All things considered, though, these are relatively minor problems. The filmmaking may be a little sloppier on the whole than in the first film, and the characters less engaging. Still, this sequel manages to better its predecessor in the burgeoning franchise’s sole reason for existence, which is the absolute best we can hope for from this type of film. It even manages to play fair with its required-by-sequel-law third act twists (an increasingly rare phenomenon.) It may not be gourmet cinema, but no cinematic diet is complete without at least a little junk food. And maybe it’s the year away from cinemas talking, but “Escape Room: Tournament of Champions” is the tastiest cinematic junk food in quite a while.