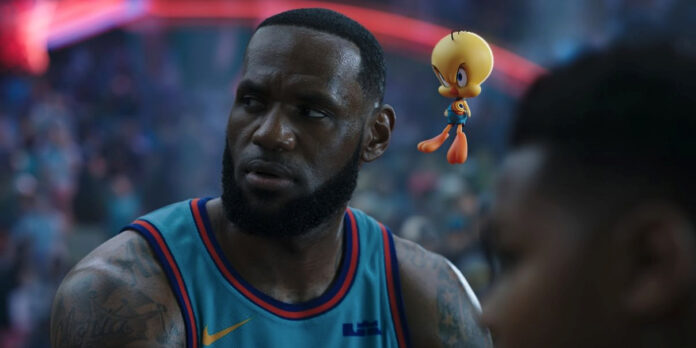 THE STORY – Superstar LeBron James and his young son, Dom, get trapped in digital space by a rogue AI. To get home safely, LeBron teams up with Bugs Bunny, Daffy Duck and the rest of the Looney Tunes gang for a high-stakes basketball game against the AI’s digitized champions of the court — a powered-up roster called the Goon Squad.​

​​​​​I was six years old when the original “Space Jam” came out. Naturally, the film did what it was supposed to for me at that point in my life as a kid who grew up idolizing basketball icon Michael Jordan and loving the Looney Tunes cartoons. It’s been a very long twenty-five years to get to this moment where a sequel could finally be made. Basketball players have come and gone, there have been enhancements in both hand-drawn and digital animation, and Warner Bros. has increased the use of its intellectual property to incorporate various characters and worlds into other new movies (see “The Lego Movie“). After many production delays, script re-writes, and even a pandemic, “Space Jam: A New Legacy” is finally here intending to not only please adults who grew up with the original and kids who may be experiencing this hybrid of animation and live-action for the first time but also, to ensure that you’re fully bought into the Warner Bros. marketing and content pushing machine. Where the first movie had a few silly but non-threatening meta and pop culture references, “Space Jam: A New Legacy” goes overboard with its immersion into the studio’s intellectual properties to the point that the self-referential jokes grievously don’t land as well, making this feel more like a cheap cash grab ploy than simply telling an enjoyable story for both kids and adults. Naïveté may be setting in, for, upon reflection, the first film also represented this shameful tactic (and it worked to the total of $250.2 million), but nostalgia is a funny thing. You can be aware of the mechanisms in place, preying upon your nostalgic love for a particular piece of IP to suck your wallet dry and still fall for it. You don’t want it to work its way over you for the sake of corporate greed, but sometimes when the onslaught is this extreme, you can’t help yourself. With all of that said, “Space Jam: A New Legacy” is not a good movie. Does the inner-six-year-old in me love it? Most definitely! Do I have problems with it as an adult despite all of this? Absolutely.

Warner Bros. studio’s latest ideas are being generated by a computer algorithm who inside the “Warner Server-Verse” takes on human form (as played by Don Cheadle) and calls himself Al-G Rhythm (get it? Because it sounds like….nevermind). Al-G wants nothing but respect and validation from the Warner executives for all of the work he has done, and his latest creation is “Warner 3000,” a program that can digitally re-create and insert actors in other Warner Bros. IP. The studio executives (Sarah Silverman and Steve Youn) bring in basketball superstar Lebron “King” James (playing a fictionalized version of himself) to pitch him this idea. Still, he turns it down, thus angering Al-G, who then hatches a plan to lure Lebron’s son Dom (Cedric Joe) away from him and take him into the Server-Verse.

Dom, a videogame creator, and his father are currently not seeing eye to eye. Dom wants to attend E3 over his father’s preference of seeing him go to basketball camp. He’s trying to teach his son fundamentals and discipline, just as he was taught as a young kid, but such stern methods and desires are only pushing his son away from him. Al-G seizes this opportunity and pits the vulnerable Dom against his father in a highly publicized basketball match in the Server-Verse. If Dom and his team win, Al-G wants the respect he feels he’s rightfully owed, and everyone who attends the game, including LeBron and his son, will be trapped in the Server-Verse forever; if LeBron and his team win, then he can take his son home.

Al-G encourages Dom to create his own team of CGI-enhanced creatures of professional basketball stars (called The Goon Squad), thus making him unaware of Al-G’s more harmful intentions. Meanwhile, LeBron needs to find a team of his own within the Server-Verse. The usual names come up: Batman, Superman, The Iron Giant, etc. However, he instead finds himself in a giant Nike-sized crater in Tune World (and now fully animated in 2D), where a lone Bugs Bunny (voiced by Jeff Bergman) also plays other Tune characters Sylvester & Yosemite Sam) stands as his only hope. The two travel through the Server-Verse, locating the other Looney Tunes characters to bring the team back together again for yet another basketball match where the stakes couldn’t possibly be any higher.

The story here is straightforward. LeBron wants to be a coach to both his son and to the Looney Tunes characters on his team, but what he needs to be is a father to his son, and that means allowing his son to find his own path in life instead of the predetermined one LeBron is forcing on him. He also needs to enable the Looney Tunes to play basketball how they play basketball, instead of obeying simple fundamentals and the basics of physics apparently, since the showcase basketball match acts more like a videogame, with powerups, cheat codes, and other supernatural nonsense (Remember – No matter how much punishment they take, the Tunes cannot die). With such a simple character motivation, this movie should be a slam-dunk, right? Not exactly.

While it’s amusing to see beloved animated characters such as the Wile E. Coyote and the Road Runner inserted into “Mad Max: Fury Road,” or Lola Bunny (voiced by Zendaya) in a comic published version of “Wonder Woman 1984,” these all serve as window dressing to distract us from the movie’s other glaring faults. I get as much of a kick out of seeing Pennywise (from “IT“), the Night King (from “Game Of Thrones“), and one of the nuns from Ken Russell’s “The Devils” standing next to each other on the sidelines of the basketball game in the Server-Verse. However, with an abundance of characters packing the frame, it can be visually cluttered at times. The look of the movie can be downright ugly. Understandably, the scenes taking place in the human world would have weak cinematography to allow the scenes in the Server-Verse to pop off the screen more. Still, that visual blandness even extends to the film’s 2D animated sequences (how is it possible that this looks worse in 2021 than it did in 196?!). Even after the Tunes get a visual upgrade to fully rendered CGI animation (“I look expensive” says a slabbering Daffy Duck), they’re overtaken by the overstuffed CGI-fest comprising the second half of this movie: the basketball game. Visual effects created backgrounds clearly look like they were shot on a green screen while the crowds all look unbelievable as well. Such breaks in the immersion of this creative world prove only to be distracting and nauseating, robbing the film of most of its entertainment outside of seeing the Looney Tunes back in action (pun intended). The hollowness of the film’s visual identity extends to LeBron James’s acting, as he cannot emote to save his life. But luckily, Don Cheadle is here to inject some liveliness into all of his scenes. He’s clearly having a ball of a time, even when he too gets an unfortunate visual upgrade in the film’s third act, with a head that, by design or not, is too small for his body. It doesn’t look good either way, but Cheadle, bless him, gives it his all to make this a somewhat enjoyable experience?

And that’s where I ultimately land. Despite this movie doing virtually everything possible to squash my enjoyment of it, I cannot deny that I still had a decent enough time revisiting these characters, seeing them in worlds such as “Austin Powers” and “Casablanca,” and getting a new spin on the “Space Jam” formula. I know I should be decrying this as an abomination towards the film industry and artistic integrity as a whole, thus labeling it as the worst movie of the year for all of its faults and the evil corporate intentions behind it. Still, that inner child in me enjoyed it for what it was, and I’m sure other kids will too. As for the adults? “Suffering Succotash!” Let’s not kid ourselves here. Despite minute moments of nostalgic enjoyment and levity, we know this is not good.