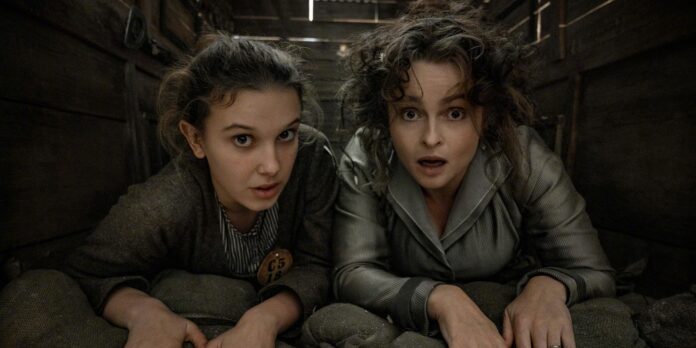 THE STORY – Enola Holmes takes on her first case as a detective, but to unravel the mystery of a missing girl, she’ll need some help from friends — and brother Sherlock.

When audiences were introduced to Netflix’s “Enola Holmes” in 2020, directed by Harry Bradbeer, they were enchanted by the fourth-wall-breaking and charming Enola (Millie Bobby Brown) on a mission to make her mark in the detective business and outsmart her well-known brother, Sherlock (Henry Cavill). It was a fun starter to a franchise that would delight young audiences, particularly girls of all ages, as they related to Enola’s spunk and determination to prove herself against all odds.

With “Enola Holmes 2,” much of the series’ charm returns – thanks to the lovely Brown – all while it tries to evolve and grow like its titular character. This time around, as Enola investigates another missing person’s case, she comes face-to-face with uncomfortable truths about sexism, women’s rights, and powerful people doing horrible things, all relevant to today. But there are times when the script throws too much at its audience and struggles with pacing.

After solving her first case, Enola has decided to open her own detective agency, although the business hasn’t been too kind to her. The people who do inquire about her services point out how young she is, can’t believe a woman could be a detective, and ask if her famous, stealthy brother is available. Just as she’s about to close up shop, young Bess (Serrana Su-Ling Bliss) walks into her office, hoping she can help find her sister Sarah, a match worker at a local factory.

The search leads Enola to go undercover at the factory, where a typhus outbreak is running wild and killing many of the women workers, and there she begins to discover a bigger mystery. Like in the first film, she cheekily chats with her audience and brings us along for the adventure, which often includes a few mishaps and run-ins with the police. She’s not as serious and established as her famous brother, and that’s what makes her so relatable and charming. Best of all, she’s able to blow everyone away with her detective skills, and it’s satisfying to watch her basically say, “I told you so” to all those who underestimate her. Brown still looks like she’s having fun playing this character, and even though it’s a stark contrast to her dramatic superhero persona in “Stranger Things,” she owns every scene.

The mystery isn’t the only thing brewing in Enola’s life. Even though she says she doesn’t have time for Lord Tewkesbury (Louis Partridge) in her life, there’s a romance brewing between the two that’s cute enough to melt even the most cynical hearts. Sherlock, too, has a perplexing case that’s been stumping him more than any other. Soon, the brother and sister realize there may be a link between their two mysteries, and we see them team up to solve the case. This is when the film is most exciting and brings us to the edge of our seats as we try to figure out all the players and pieces in this game. It’s fun to watch Brown and Cavill play up the sister-brother relationship as they’re usually annoyed with each other, but the love can still be felt between them.

Thankfully the always-fun Helena Bonham Carter returns as their eccentric mother and provides help along the way – and wreaks havoc once again with a few explosives. Carter’s character should have her own movie or series because she’s such a delight to watch. Other supporting cast members, such as David Thewlis and Adeel Akhtar as police detectives after the young heroine, are fun additions to this film.

The script sometimes feels stuffy, particularly when it throws too much information that can be hard to keep track of. It can definitely be felt in the runtime, which clocks in at over two hours, and a fun film such as this doesn’t need to be that long. As a result, it sometimes ends up dragging, and at least 15 minutes could have been cut easily from the final runtime.

But the twists and turns in “Enola Holmes 2” are as satisfying as they were in the first film, if not even more, thanks to the true story of workers’ rights that the film is based on. As long as Bradbeer is behind the camera and Brown and Cavill are willing to reprise their characters, mystery fans will continue to watch this charming series. But hopefully, the case can be solved in less than two hours next time.

<b>THE GOOD - </b>Much of the charm from the first film returns. Millie Bobby Brown and Henry Cavill have great sibling chemistry, and watching them team up in this film is fun.<br><br> <b>THE BAD - </b>The script can be a bit stuffy at times. An overlong runtime.<br><br> <b>THE OSCAR PROSPECTS - </b>None<br><br> <b>THE FINAL SCORE - </b>7/10<br><br>"ENOLA HOLMES 2"