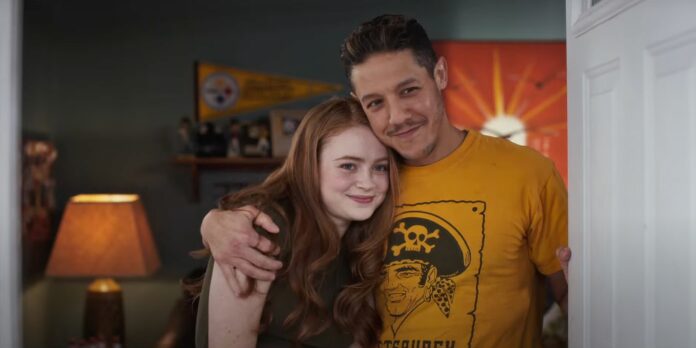 THE STORY – Tess is a young woman who’s grappling with the shattering death of her younger sister, Zoe. As the rest of her family grieves in their own ways, Tess seeks support from her biological father and a juvenile delinquent who lives in the neighborhood.

Though Gren Wells’ “Dear Zoe” was filmed over three years ago, it’s only just now seeing the light of day, perhaps as a way to capitalize on the career-defining year star Sadie Sink has had. After first bursting onto the scene in 2017 with the second season of “Stranger Things,” Sink continued to make a massive impression in Netflix’s flagship franchise. She later experienced yet another surge in popularity last fall, leading Taylor Swift’s directorial debut “All Too Well: The Short Film,” alongside “Teen Wolf’s” Dylan O’Brien. However, nothing could have prepared Sink for how terrific her 2022 would be, where she not only starred in the most successful “Stranger Things” season yet (and had one of the most affecting arcs, including an episode almost entirely centered around her emotional growth – “Dear Billy” – that wound up earning her an HCA Award) but also drew raves working with Darren Aronofsky and Brendan Fraser in “The Whale,” a prominent awards player this season that even brought her a bit of attention in the Best Supporting Actress conversation for starring alongside this year’s presumptive Best Actor frontrunner as the depressed daughter he wishes to reconnect with before his death. And now, before “The Whale” reaches its wide release, Sink fans will have “Dear Zoe” to tide them over, which, despite being a bit of a conventional coming-of-age story, features yet another powerhouse performance from one of our most talented rising stars.

When “Dear Zoe” starts, we open in the aftermath of a tremendously traumatic event that no one in the DeNunzio family has recovered from a few months prior; on the day of the September 11 attacks, one of their two youngest daughters, Zoe, lost her life in a hit and run accident. It’s the 15-year-old Tess (Sink), the family’s oldest daughter, who takes this news the hardest, as she was supposed to be watching her sister outside that day but found herself drawn away by the news of the terrorist attacks, and thus left Zoe alone for a moment too long, resulting in this tragedy. As the rest of the family – mother Elly (Jessica Capshaw), stepfather David (Justin Bartha), and youngest sister Emily (Vivien Lyra Blair) – tries to heal, Tess proves repeatedly resistant to change, tanking their attempts at therapy and slowly growing detached from life and those around her over the course of the school year, a process expedited by the revelation that Elly might have been having an affair with a handsome younger worker at their local grocery store, shattering Tess’ image of who her mom really is. Eventually, when all it becomes too much to take, Tess runs away to live with her estranged father Nick (Theo Rossi), a former “troublemaker” who now still lives on “the wrong side of town” but represents an escape for Tess, especially as a parental figure who cares deeply for her in spite of his past pitfalls and isn’t connected to her present emotional crisis. Throughout the summer, the support Tess receives from Nick – and a burgeoning friendship (or romance?) with a local boy named Jimmy (newcomer Kweku Collins) – allow her to learn how to love life again and slowly, but surely, process the pain of Zoe’s passing.

“Dear Zoe,” based on the 2005 novel of the same name (which explains its early aughts setting and aesthetic), is undoubtedly a story told with striking sincerity and sensitivity, approaching solemn subject matter with authentic grace and never seeking to sensationalize its central tragedy in its efforts to explore a teenage girl’s emotional evolution in the wake of unspeakable trauma. However, at the same time, it is also an incredibly conventional coming-of-age story, hitting every cliché and basic thematic beat you’d expect from a story like this and doing little to differentiate itself from several other standout films in this considerably crowded subgenre. Of course, we’ll find that there’s more context to Tess’ family’s feelings than she initially gives them credit for, that Tess’ father isn’t as “clean” as he makes himself out to be at the start, that Tess’ romance will hit a few speed bumps before stabilizing once more on account of her culture clash with Jimmy, and on and on and on. It’s not that the story is poorly told by any means – aside from a few “obvious” lines of dialogue and clumsy expressions of emotion – but merely that we’ve seen it told so many times before, in almost the exact same way. The involvement of the 9/11 attacks as a backdrop to this story’s specific hardship does help it stand out, and the screenwriters (Mark Lhormer and Melissa Martin) tie those terrible events to this film’s central themes in compelling ways, but that can only take “Dear Zoe” so far when the rest of the movie is so rudimentary, and when the production values (notably, the cinematography) feel like more of a fit for a TV film than a theatrical release.

Thankfully, Sink is such a naturally gifted performer that, even though this was shot three years ago and she’s undeniably grown even more as an actress in the time it took for this film to receive a wide release, she still manages to turn in yet another powerful and poignant performance that underscores the fact that she’s one of her generation’s most promising stars on the rise, capable of elevating any and every project with her acute characterization of teenage angst and anguish. You’ll see shades of Max from “Stranger Things” in Tess here, but this is also ultimately a softer – and subtler – role once the initial storminess subsides, which allows Sink to show new range and stretch herself, particularly through her heartwarming romance with the former ruffian Jimmy (and it helps that Kweku Collins also charms, contributing considerably to the cultivation of a credible chemistry between the two). Their emotional progression isn’t perfect – did Tess’ new Black boyfriend from “the other side of town” really have to be the one to introduce her to weed? – but Sink and Collins do the heartfelt heavy lifting to convince us that these two contrasting personalities would be drawn to each other and find comfort in one another as well, and Sink and Rossie are equally effective at expressing this same affecting evolvement. If you watch “Dear Zoe” at all, it’ll likely be for Sink, and thankfully, what you’ll find is another example of one of our best and brightest younger actresses demonstrating her dramatic depth, even when the material around her isn’t as fresh as her deeply felt work.

<b>THE GOOD - </b>Sadie Sink turns in another reliably riveting and emotionally wrenching performance that underscores how effective she is at portraying teenage angst and anguish, which is all the more impressive since this was shot three years ago.<br><br> <b>THE BAD - </b>This isn't a poorly told story, but simply one we've seen told countless times before that uses every coming-of-age cliché in the book. The production values also feel like more of a fit for a TV film than a theatrical release. <br><br> <b>THE OSCAR PROSPECTS - </b>None<br><br> <b>THE FINAL SCORE - </b>5/10<br><br>"DEAR ZOE"