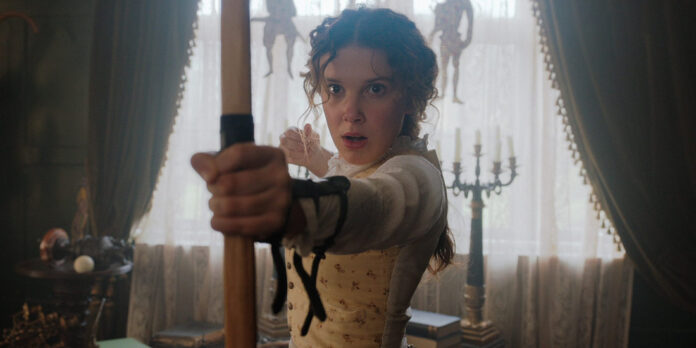 THE STORY – While searching for her missing mother, intrepid teen Enola Holmes uses her sleuthing skills to outsmart big brother Sherlock and help a runaway lord.

​Some of the best films based on classic works of literature are able to modernize and update the material without removing it from its period setting, and that’s exactly what “Enola Holmes” does. Written by Jack Thorne and directed by Harry Bradbeer, the film is based on the book of the same name by Nancy Springer which follows Sherlock Holmes’ little sister as she sets out to solve a mystery of her own. The vibrant Millie Bobby Brown both stars as the titular character and is a producer on the film, and the cast includes talented actors like Henry Cavill, Sam Claflin, and Helena Bonham Carter.

The story finds Enola just after her sixteenth birthday and following her mother’s shocking disappearance. Enola’s father died when she was young and she barely remembers her two older brothers, Sherlock (Cavill) and Mycroft (Claflin). She was raised rather unconventionally by her mother (Carter), who has left her a series of clues to unscramble to figure out where she has gone. Enola immediately clashes with her brothers and sets out on her own, eventually coming across the young Lord Tewksbury (Louis Partridge) who has his own mystery that she can’t help but want to solve.

This kind of irreverent period drama has become more popular recently, and the film shows similarities to “Emma.” and “The Personal History of David Copperfield” from this year. It modernizes and reinvents the classic tales of Sherlock Holmes around a young, female, and more playful main character. Enola often speaks directly to the audience, breaking the fourth wall, giving Brown even more of a chance to charm viewers. But all of the normal pieces of a period drama – nice shots of the English countryside, lovely costume and production design, a rousing score – are there too and in top form.

The characters themselves are the film’s best asset, from the spirited Enola to the fussy Mycroft. Carter doesn’t have many scenes, but the sequences of Enola and her mother are touching and it’s great to see Carter in the sort of period drama role that she was known for at the beginning of her career. Cavill and Claflin are both good if not definitive versions of their characters, though neither has a lot of screen time. (This is very much Enola’s show, not Sherlock’s.) Claflin plays against his normal type as the condescending, uptight Mycroft, and the two’s banter is one of the better parts of the film.

But there’s no mistaking that Brown is the star of the film with her very direct and expressive performance. There’s something strikingly modern about her, though she also blends into the period setting admirably. With a lesser actress in the lead, the character could have become annoying, but Brown manages to make her completely endearing. Sherlock Holmes is typically a very male-centered property, so it’s a great change to have a young woman at the center of it, showing the same intellectual aptitude as her older brother.

The film’s main downfall is that the plot itself doesn’t live up to the characters. The mysteries that Enola must solve aren’t as engaging as they should be and seem to tie up too suddenly at the end. The plotline of Enola searching for her mother never completely gets resolved, though it has much more emotional pull than the other case she decides to go after.

The other confusing thing about the film is that it’s a little too intense to be appropriate for younger children, but its heroine being a teenager may turn some adult viewers off of watching it. The fight scenes in it are, for the most part, delightfully camp, but there are a handful of frightening sequences. The film is rated PG-13, so it’s not suitable for families with younger children, but hopefully, adults won’t skip over it. ​

Despite the film striking the perfect balance of camp and seriousness, the funniest thing about the film may be the lawsuit by the Conan Doyle Estate claiming it violates copyright by portraying Sherlock Holmes as having emotions. Though its plot has issues, and its intense sequences make it not fit for younger viewers, the film manages to charm based on its characters, performances, and design. “Enola Holmes” is a very worthy addition to the Sherlock Holmes canon.