“EDGE OF THE WORLD” 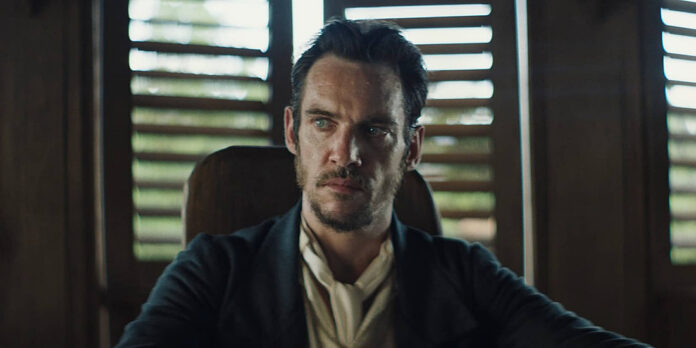 THE STORY – The adventures of Sir James Brooke, who defied the British Empire to rule a jungle kingdom in 1840s Borneo, embarked on a lifelong crusade to end piracy, slavery and head-hunting, and inspired LORD JIM and THE MAN WHO WOULD BE KING.
​
THE CAST – Jonathan Rhys Meyers, Dominic Monaghan, Ralph Ineson, Hannah New, Josie Ho & Bront Palarae​

​How do you tell a story like James Brooke’s – the British soldier and adventurer who traveled to Borneo in 1839 and became the Rajah of Sarawak – in this day and age? Through his nephew, his descendants ruled the area for a century. His life inspired both Rudyard Kipling’s “The Man Who Would Be King” and Joseph Conrad’s “Lord Jim.” Though a fascinating figure, his story is steeped in British colonialism and the myth of the white savior. So how and why would you choose to make a biopic about him today?

“Edge of the World” is actually the passion project of writer and producer Rob Allyn, who was fascinated by tales of Brooke’s adventures in the jungles of Borneo. Directed by Michael Haussman and starring Jonathan Rhys Meyers as Brooke, the film catalogs the explorer’s life from the time he landed in Borneo. And while it certainly tries not to fall into tropes of older movies about white male colonizers, it’s interesting that the Brooke Heritage Trust served as technical advisors.

The film opens in 1839, which a title card tells us was a “time of empires” – when the British ruled nearly half the planet. Brooke has arrived in Borneo with his nephew Charlie (Otto Farrant) and cousin Colonel Arthur Crookshank (Dominic Monaghan). It’s a land in upheaval with threats from pirates and rival princes. Brooke says he’s on a “voyage of discovery” to study plants and animals but is quickly drawn into helping the local princes, Mahkota (Bront Palarae) and Badruddin (Samo Rafael), put down a rebellion. What starts out as an exploration quickly turns into gruesome violence.

Brooke is seeking a new beginning after personal failures in England, both in school and in the army. He’s also running from a past relationship and finds love in the arms of a local woman Fatima (Atiqah Hasiholan). He wins over many of the people of Borneo, and the Sultan of Brunei makes him the Rajah of Sarawak, but he must find a way to govern his people and keep the peace despite many threats.

The film tries to pack a lot into an hour and forty-five minutes, never sure if it should focus on Brooke’s personal relationships or the politics of Borneo. Thus, it can be a little hard to follow and understand the intricacies of who is fighting who. The dialogue leaves something to be desired, and the narration by Brooke doesn’t work most of the time.

Where the film does succeed are its beautiful visuals of the jungle, as it was filmed on location in Sarawak. Of course, amongst the beauty is some genuinely gruesome imagery with severed heads galore. Meyers brings his usual intensity to the role of Brooke, and it works here.

There are careful attempts to not fall into the British colonial narrative of the white man arriving to civilize a people, but it doesn’t entirely avoid the narrative. The film is careful to point out that the British are as violent as the people of Borneo, despite referring to the latter as “savages” a few times. Brooke himself is conflicted by the violence and initially has little desire to conquer for himself, but rather wants to learn about the land.

There might be a way to tell this story that gives equal voice to the inhabitants of Sarawak and grapples with their reaction to Brooke being put in place as their ruler. A better film might also have drawn further on how the British were equally, if not more ruthless and “savage” than the way they described the native people of the lands they encountered. Unfortunately, this is a film about Borneo that is very centered around its white male hero, which gives it an almost dated feel.

“Edge of the World” is ambitious in the tricky line it’s trying to walk in, telling the story of James Brooke. While its storytelling is often muddled, the beautiful scenery means the film isn’t an entire waste. It’s missing the swashbuckling epic factor that this genre typically goes for but is steeped in violence that will turn some audiences off. Still, it’s nice to see a largely unknown story told in a biopic, even if Brooke is a perplexing man to highlight.

Powered by JustWatch
Share
Facebook
Twitter
Copy URL
Previous article
Trailer – “Reminiscence”
Next article
The Next Best Picture Podcast – “The Conjuring: The Devil Made Me Do It”