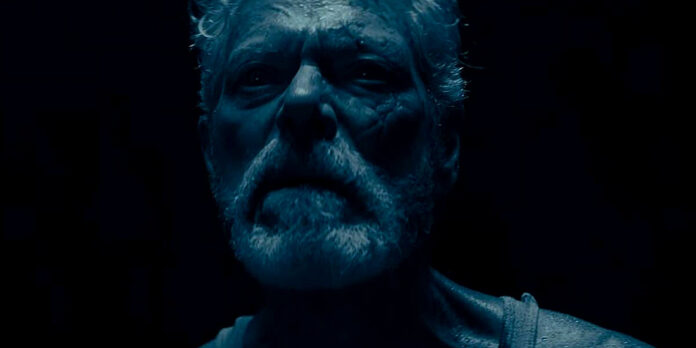 THE STORY – A blind veteran must use his military training to save a young orphan from a group of kidnappers.

When the trailer and first details emerged for a sequel to 2016’s surprisingly successful “Don’t Breathe,” many of us had the same question on our minds, “Why?” The why was easy: money. The first film made a ton of it, and now Hollywood is doing what they do best – taking a good thing and running it into the ground so they can squeeze every last drop of cash out of it. However, another question we were asking and a more important one was “How?” This question was way more necessary due to the first film’s revelation that Norman “The Blind Man” Nordstrom is a murderer and rapist (a fact which this latest movie doesn’t ignore). How is a sequel which has him cast in the role as the protagonist/hero going to get us on his side? Is this a prequel? Nope. It’s definitely a sequel, taking place after the events of the first film. Yet somehow, we’re expected to switch our allegiances towards him for this story? Don’t go in holding your breath, “Don’t Breathe 2” never once succeeds in justifying its existence. Even with this incredibly shaky foundation to start with, the film is thwarted by other problems that didn’t impact the first as much, making this sequel unnecessary and shameful.

Taking place eight years after the original, “Don’t Breathe 2” finds Gulf War veteran and blind Norman Nordstrom (Stephen Lang) living a quiet and unassuming life in a new house with his dog Shadow and 11-year-old Phoenix (Madelyn Grace), who he rescued from a house fire many years ago and has raised as his own. It’s his own contorted attempt to re-create a loving relationship with a family member after his own was taken by a drunk driver many years ago. However, Nordstrom knows that nothing should be taken for granted and that one day, he will have to atone for the many crimes he’s committed. He takes every precaution he can to protect Phoenix. Still, when dangerous intruders invade his home one evening (led by Brendan Sexton III) with their eyes set on retrieving Phoenix, Nordstrom revisits that dark side of himself, one which will stop at nothing to make sure that Phoenix is safe, no matter the cost.

Gone are the original’s leading star Jane Levy and director Fede Álvarez. Such a sequel should never have been made without either of them in their respective roles, especially considering that Levy’s character “Rocky” survived the first film. However, whatever the reasons were behind Levy’s departure, it has left Álvarez (who is now only a producer this time around) and his co-writer Rodo Sayagues (making his directorial debut) with the unfortunate task of convincing audiences to root for Nordstrom as the protagonist this time around. Emotional manipulation is their secret weapon which they deploy many times throughout the film to get us on Nordstrom’s side, mainly involving dogs. His enemies will shoot a dog, but he won’t. Dogs love him but are vicious towards others. He feeds and takes care of his dog arguably better than he takes care of Phoenix. Although he has raised her and provided for her, he never lets her wander into town alone (she’s usually accompanied by local Ranger Hernandez, played by Stephanie Arcila) or attend school (he homeschools her). His overprotection also involves putting her through a series of survival tests in hopes that one day, when his inevitable judgment day comes for his past crimes, that she will be more than capable of defending herself.

Such setup does allow for some technically well-executed action sequences involving hand-to-hand combat, evasion within the pitch-black environments, and seeking clever ways to get out of incredibly intense predicaments. It’s here where Sayagues comes the closest to matching the style of the first film. Some of these set pieces are genuinely thrilling to watch unfold with slick camera moves (the house invasion scene’s cinematography evokes memories of David Fincher’s “Panic Room” in how the camera glides throughout the environment) and detailed (but not as strong as the first film) sound work. However, those who are still not convinced early on as to why we should be rooting for Nordstrom in the first place will be left unfazed by such exemplary work.

And even if audiences are impressed by the technical aspects of “Don’t Breathe 2” or don’t entirely need to be invested in Nordstrom’s redemptive journey, they’re still going to be forced to endure the film’s preposterous storyline, horrendous acting, and unintentionally hilarious dialogue, most of which comes from Nordstrom and Phoenix’s attackers. Once it is revealed who the men are after Phoenix and why, the film takes one wrong turn after another. There were multiple bursts of laughter during our screening of the film, and they weren’t for the right reasons. Whether it’s a dull line delivery or a character introduction that is intended to come off creepy but instead comes off as hysterically unbelievable, “Don’t Breathe 2” somehow manages to strip away any ounce of tension or horror it ever had to begin with due to overly exaggerated performances and silly plot developments.

While it’s nice to see Stephen Lang continuing to receive work and return to the character he portrayed so well in the first film, his physically and emotionally strong effort is overshadowed by all of the film’s faults. Even newcomer Madelyn Grace, who you would hope to see emerge from this as a breakout star, can’t overcome the silliness of the film’s plot and its over-the-top cartoonish villains. Even if all of these other blunders were corrected, the film would still have to contend with its first and greatest obstacle: getting us to care for a story where our lead character is an evil man. While following a villain as our protagonist has been done well plenty of times before, there’s usually a line that the character does not cross, which would, in turn, betray the audiences’ trust. That line was already crossed for the Nordstrom character in “Don’t Breathe,” so asking us to sit through another story with him as the leading character this time around and knowing what we know about him is a massive ask. We all want to believe that redemption is possible despite our faults in life and that we can somehow atone for our mistakes and do right by others again. “Don’t Breathe 2” puts forth the notion that there are some people out there who don’t deserve to be saved. Well, neither does this film nor this character. The filmmakers should’ve seen what we see and either told this story from a different perspective to begin with, or not tell it at all. It’s Hollywood sequel making at its absolute worst and does not deserve our sympathy or support.