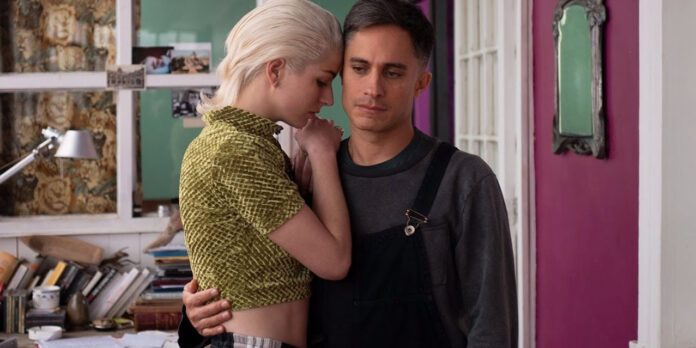 THE STORY – Ema and Gastón are a young couple who adopted Polo, a young boy. However, they are unable to raise him and give him back. The couple must deal with the aftermath of the failed adoption as their household falls apart.

The face of the film’s lead, Mariana Di Girólamo, will haunt you, her slicked-back, platinum blonde hair and fierce eyes hiding a lifetime’s worth of regret, shame, and anger. Ema is a dancer, married to her company’s choreographer (Gael García Bernal), and to say they have problems is an understatement. After an incident, the two have given back Polo, the six-year-old they adopted, and they are reacting to it in very different ways.

Larraín has always had a keen visual sensibility, using film stocks, filters, lenses, and colors to delve into his characters’ interior lives as well as the world in which they live. In “Ema,” he takes his cue from the ensemble of young dancers and their voracious appetites – for sex, for life, for danger. Sergio Armstrong’s sinewy camera movements dance with the performers, bathed in bold bisexual lighting. The neon of the city of Valparaíso practically becomes a character unto itself. This is one of the most drop-dead gorgeous films of the year, and when Larraín is firing on all cylinders, “Ema” is downright hypnotic. The colors, camera movement, editing, and Nicolas Jaar’s score make an intoxicatingly potent mixture that is impossible to look away from. The problem is those moments when that mixture doesn’t come together.

Larraín’s screenplay, co-written with Guillermo Calderón and Alejandro Moreno, keeps much of its title character’s inner life a mystery, all the better to spring a series of surprises in the last act. The problem with that is that when the film’s style isn’t hypnotizing you, what’s left is thin characters doing things that don’t make meaningful sense in the moment. That can only be interesting for so long before it becomes frustrating, and “Ema” is frustrating almost as often as it is hypnotic. Di Girólamo, as Ema, is the manifestation of this in human form. She is overflowing with charisma, and her styling makes her stand out in every scene. When she looks at you, her gaze is so intense that she might just set you on fire. However, her face remains an implacable mask, and her feelings are buried deep inside. Even as she seems to dance out her feelings, Ema’s inner life remains somewhat incomprehensible. Why she does what he does, and when she decided to do it, remains unclear despite a climactic explanatory monologue because Ema has been so guarded and untrustworthy throughout. For a character study, even one as highly stylized as this, that’s deadly.

Still, when “Ema” works, it has power completely unlike anything else due to Larraín’s compelling sensibilities as a storyteller. The big surprises in the last act land on an emotional level thanks to Di Girólamo opening up at the exact moment when the script requires her to do so. Even if it doesn’t work on a logical level, Larraín’s latest operates on an intuitive, emotional level that matches Larraín’s expressionistic style. If you can deal with the frustration, you’ll be rewarded with some of the most uniquely striking filmmaking you’ll see all year.