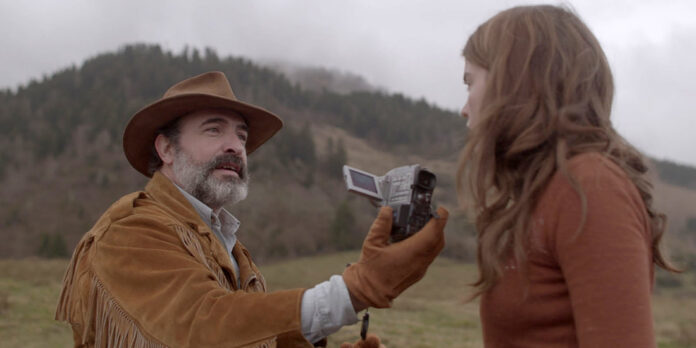 THE STORY – A man’s obsession with his designer deerskin jacket causes him to blow his life savings and turn to crime.
​
THE CAST – Jean Dujardin & Adèle Haenel​

​​​There’s a certain type of film that can tap into an offbeat and strange sensibility that makes it quite enjoyable. It’s a delicate act that it has to pull off in terms of accessibility. If it strays too far from the path then its absurdity gets the better of the storytelling. At the same time, if it feels too timid then there’s a feeling a wasted potential for what could have been a much more creative endeavor. Despite its best intentions, “Deerskin” is a film that feels as though it could have turned into a weirdly enjoyable exercise, but unfortunately, it never commits enough to become truly successful.

Jean Dujardin plays Georges, a man whose life is in a severe spiral. He’s recently divorced from his wife and has found a new obsession while wallowing in his despair: a vintage deerskin jacket with an abundant amount of fringe. After going broke from the purchase, he settles down in a sleepy little town where he eventually strikes up a casual relationship with bartender Denise (Adèle Haenel). He lies to her and says he’s a filmmaker working on a new production, which intrigues Denise as she’s an aspiring editor. This soon sets him on a dangerous path of obsession – mostly with his new-found apparel – and the homicidal urges that come with being the only man to possess such killer style.

Director Quentin Dupieux has an odd sensibility as a storyteller. It’s one he has retained ever since his film “Rubber,” the tale of a sentient tire on a murder streak, broke out a few years ago. It’s an intriguing concept, much like this one had the potential to be. At the core of “Deerskin,” there’s commentary around the deep isolation that drives a particular psychosis within people, especially ones that treat the world and the people around them with disregard. There’s even a meta-narrative that looks inward on the process of filmmaking and who really can contribute the most to its success. It gives the film a dry and dark sense of humor, particularly when the body count starts to rise, and there’s a flavor of “Little Shop of Horrors” that can be gleaned from Georges’s imagined conversations with his jacket that encourages his urges.

However, all of these elements feel underdeveloped and quite shallow. Much of this thesis is built on a foundation of half-baked ideas that aren’t fully formed and it makes the film feel quite empty. With a runtime that doesn’t even clear 80 minutes, the material is quite thin and never has anything truly insightful to say about its characters. There’s little payoff to the gags that it sets up and all of the intrigue dissipates as soon as it starts to find its groove. The film ends up feeling like a lost cause because nothing ever amounts to anything substantial. A light farce is perfectly fine as long as there’s something satisfying to be found at the end. That is nowhere present here, as it all leads to an anti-climax that’s quite underwhelming.

Dujardin has had a relatively quiet career in front of American audiences since winning the Best Actor Oscar for “The Artist” almost a decade ago. He doesn’t inhabit a character with nearly as much charisma this time, but the results do show his talent as an actor. There’s a certain charm to his performance that features an odd mixture of rugged and goofiness. One can sense the pathetic nature that can lead to his bloodlust, and while the character himself doesn’t always seem fleshed out, there’s a screen presence that Dujardin brings that makes it somewhat engaging. The same, unfortunately, cannot be said for Haenel. She’s saddled with a bland character with very little personal insight and it hinders her effectiveness. Anyone who has seen “Portrait of a Lady on Fire” or “BPM (Beats Per Minute)” knows what a fantastic and fiery performer she can be. Sadly, this role underserves her greatly.

There are many elements that had the possibility to be an interesting thematic dive into the natures of toxic masculinity and insecure psychosis, all wrapped within a premise that could produce an entertaining level of grindhouse gore. Unfortunately, so many of these ideas are underserved by this script, and it ultimately disrupts the engagement one has to this story and these characters. The actors try their best, but they also suffer to make a significant impact. The opportunity was present to create a unique experience, but nothing seems to have been built on that foundation.