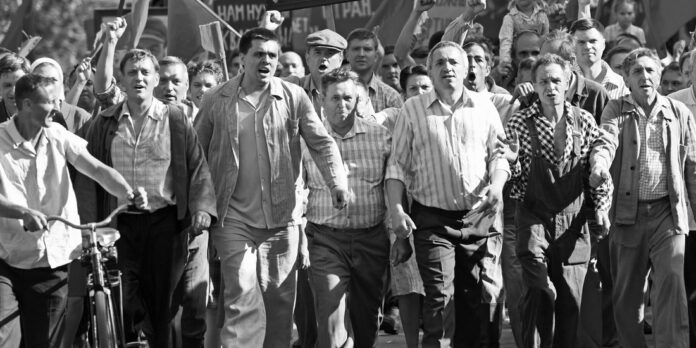 THE STORY – In 1962, workers from a small industrial town go on strike when the communist government raises food prices.​

One of the most intriguing elements of world cinema is the ability to see facets of one’s own experiences reflected in a culture that may, at first, seem dramatically different. There is an initial tendency to view films that set themselves in foreign places as separate from the daily lives and experiences we may go through. Of course, not only do such films manage to illuminate subjects with a sense of universality, but they can often expose deeper meanings that comment on a host of political and social issues that bind us. A government trying to control its people amid an act of atrocity it has committed on them is an event that many communities find themselves faced with, and that is what “Dear Comrades!” aims to analyze. It manages to do so with great skill and rich commentary.

Inspired by real events, the film takes place in the Russian town of Novocherkassk in 1962. The communist government is at the center of its citizens’ ire due to the struggling economy forcing a decrease in wages and a rise in food prices. Tensions quickly increase when the workers in the town go on strike and Lyuda (Julia Vysotskaya), a staunch communist dedicated to the party line, looks upon the strike with contempt. As the protest increases in size and intensity, the government has its own response. It opens fire on the town, killing dozens of people and spending the next few days attempting to cover it up. Lyuda becomes personally invested when her daughter (Yuliya Burova) goes missing after the chaos. So begins the frantic search that will reveal far more about Lyuda than she was willing to initially accept.

Almost immediately, one is taken in by the engaging filmmaking that director Andrey Konachalovskiy manages to craft. The style never reaches hyperbolic levels, even when the chaos descends on the streets, yet the storytelling remains incredibly captivating. There is an assured hand directing this piece, one that focuses on the quiet moments of character that are matched equally with the tense and harrowing moments of suspense. The centerpiece sequence of the massacre puts the audience right in the middle of the frenzy without ever losing a sense of control, which is captured beautifully by the stark cinematography. There is hardly a moment when one doesn’t feel the terror, anger and tragedy of the situation that unfolds with absolute horror. Konchalovsky’s efforts are assured in the ways it creates a chilling and haunting portrait.

One can get this sense from the script by Konchalovsky and Elena Kiseleva as well. Admittedly, the story does take a little while establishing itself fully and the table setting to organize the characters and background information is somewhat stilted. However, that soon gives way to a fascinating examination of a system so determined to control its people that it will take the most extreme measures to do so. The meticulous cover-up that soon follows is disturbing yet illuminating to the layers of the naked corruption that this organization is willing to inflict. It contrasts nicely with the somber search of a desperate mother and strengthens the film’s emotional core. Like the filmmaking, there isn’t much exuberance in style in this screenplay, but the procedural elements find themselves compelling in nearly every way.

Vysotskaya provides such a commanding presence in every frame she’s in and ends up carrying the film incredibly well. A genuine transformation occurs in the character that morphs from sturdy institutionalist to despondent citizen, losing faith in a flawed power structure. The nuances that exist within are expertly portrayed in her performance, and as the hardened exterior becomes more brittle, it only emphasizes the complex journey she travels. Her central role is so effective at drawing focus that it ends up being a detriment to the rest of the supporting players. That isn’t to say that there isn’t fine work, and everyone does a credible job. However, the roles blend together and no one makes a noteworthy impact. Vysotskaya’s turn is strong enough to deserve the spotlight, but the trade-off is her co-stars do not possess anywhere near her strengths of character either.

Much of “Dear Comrades!” is an exhilarating and suspenseful exploration of a dark moment in history that, thankfully, is not a clinical observation. The filmmaking constructs an intimate landscape to peer into, making the emotions and stakes feel wholly present in the moment. The story itself also mines this material for a strong indictment of a cruel authoritative response and the tragedy that ensues when faced with such a shattered world. The lead performance is commanding, which compensates for a dull start and a lacking supporting ensemble. The film still finds another avenue to explore universal themes in a place that may seem entirely different on the surface but actually shows powerful truths with a profound significance.