“NIGHT OF THE KINGS” 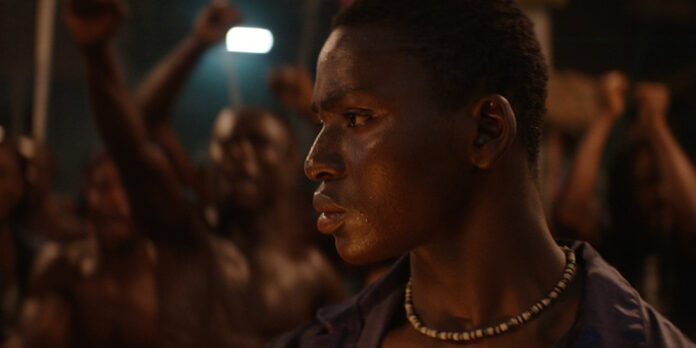 THE STORY – A new arrival to an Ivory Coast prison is unaware that his storytelling skills will determine his life or death.
​
THE CAST – Bakary Koné, Isaka Sawadogo & Steve Tientcheu
​
THE TEAM – Philippe Lacôte (Director/Writer)
​
THE RUNNING TIME – 93 Minutes

​​There is a particular beauty that can be portrayed in watching films that comment on the very notion of storytelling itself. It’s such a multi-faceted form that has significant meaning both on the surface and tiers below. The act itself is so illuminating in the ways it can reveal common truths of the world and bear witness to how such tales are contorted, transformed, and eventually evolved. It’s a fascinating metamorphosis that can occur, and being able to note such an event is a compelling action. That is at the heart of “Night of the Kings,” a moody and engaging reflection of the power stories can have, particularly when cast through a unique perspective.

Set in the city of Abidjan in the Ivory Coast, the film centers itself on a large prison known as La Maca. A young man (Bakary Koné) has just arrived but is already in the targeting sights of many of the prisoners. One of them, Blackbeard (Steve Tientcheu), is an authority figure reigning over the inmates. However, his health is ailing, and tradition dictates that a new storyteller, called a Roman, must be chosen to spin a tale lasting through the night until before a new chapter turns. As the young man is thrust into this position, he learns of the serious consequences that await him once he finishes the story. It is incumbent upon him to keep speaking as long as he can before his fate is ultimately decided for him.

What is immediately apparent is just how striking the sense of tone is established. Director Phillippe Lacôte crafts a world that is infused with a supernatural spirit while still keeping its style grounded. The atmospheric cinematography beautifully captures a harsh reality that blends well with a haunting aura, creating a dynamic portrait that often feels energetic and lively. The foreboding score also works in this endeavor, and the filmmaking overall is quite strong at constructing a mostly captivating presence that is immersive in its setting. The heightened imagination makes this environment feel detailed in a textured way, especially when one sees glimpses of the vivid story being told. One is only invited further into this strange yet alluring ambiance, and eventually, the layered world-building becomes quite impressive.

The story that is being told here has many merits but also lacks in certain other respects. Lacôte’s screenplay is heavy with themes regarding the power of storytelling, a large emphasis of which employs folklore mythology to relate directly to the audience receiving it. There’s an intriguing commentary regarding that reflective nature and how societies use these tales to inform their own cultures. The discussion goes even further in how such stories are re-interpreted by its audience, ever-evolving into more expressive and powerful anecdotes.

However, for all of the power these themes possess, the actual plot and characters’ substance ends up leaving much to be desired. All the characters are thinly drawn, and the sheer amount of them makes it difficult to find any kind of emotional investment. The relationships that drive the narrative forward come across as opaque, with some intention, but it only fuels the issues with a momentum that can often stall the pace. While the film is thematically rich, it suffers from a deficit in characterization that makes things feel lethargic. It’s not enough to damn the whole film, but having characters who do not come across as fully dimensional and merely serve at the behest of the ideas can make for a frustrating watch.

Koné’s central performance here captures an intoxicating mixture of anxiety and stoicism as he must traverse this complicated arena he’s been newly introduced to. He makes for an absorbing protagonist, even if the writing doesn’t offer much depth. His performance is engaging even when one wishes more from the page. The same goes for nearly all of the supporting cast members, most of whom have a great presence but can only be so impactful. Tientcheu showcases a menacing yet oddly warm persona, and there’s also a fiery energy from Macel Anzian as an inmate who befriends Roman. The rest are serviceable but somewhat forgettable, including Denis Lavant in a pretty thankless role.

“Night of the Kings” has so much to appreciate on a level of craft that sometimes it feels undeniable to respect. The filmmaking creates such an alluring world to fall into, and it highlights dark political realities and fanciful myths in daring ways. It helps to enrich the tapestry of thematic weight that can be exciting to uncover. Unfortunately, so many of these elements clash with a story that sees its characters stripped so bare that the emotional connections ring hollow and the total engagement with the piece feels stunted. Still, that doesn’t diminish the impressive achievements that are on display, and what it does end up revealing about the nature of storytelling is still worthy of observation.