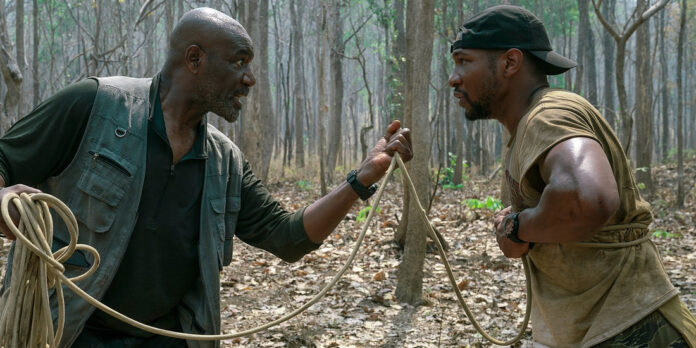 ​​​When it comes to the vast collection of talented and memorable filmmakers, very few of them match the likes of Spike Lee. Even the best among them don’t have the ability to capture the moment quite like Lee does, always harboring an innate ability to speak to the times in a profound way and provide a striking bit of commentary. Even when those endeavors prove to not be entirely successful, there is still an engaging statement to be found at the center. With decades in the business, Lee remains relevant in a way not many of his contemporaries are able to sustain. All of these sentiments are true of his latest film “Da 5 Bloods”. Like many of his previous movies, it is messy and a tad bloated, but features some fine performances and intriguing themes that will resonate strongly.

The story follows a group of Vietnam War veterans and their pilgrimage back to the country to honor a mission they took upon themselves. Otis (Clarke Peters), Paul (Delroy Lindo), Melvin (Isaiah Whitlock Jr.) and Eddie (Norm Lewis) are back to travel to the place where their squad commander (Chadwick Boseman) was killed in action and buried. They plan to hike to the remote spot and retrieve his remains for a proper military burial. However, they also harbor a secret agenda, for at this particular spot is a heap of gold they came across and hid all those years ago. With the conflict long since subsided, the group makes plans to secure their treasure but not without roadblocks. Paul’s son David (Jonathan Majors) has come unexpectedly to assist in their mission and they encounter even more dangerous obstacles along the way.

Lee’s boldness as a storyteller has never diminished, but that has also not made him immune to some tendencies of overindulgence. It’s difficult to overlook the latter complaints in a film that does not always use its two-and-a-half runtime efficiently. It’s here where “Da 5 Bloods” falters the most. The plot meanders its way into distracting tangents that cause the more emotional character growth to feel stunted. The start of the film is rushed and disorganized while things feel lethargic by the time the finale comes about. In truth, the script by Lee and his co-writers comes across as ambitious but it suffers under the weight of its own enormity. This all results in the film having major issues with focusing on the most emotionally effective sections of the story, also complemented by some truly chaotic editing choices.

Still, when Lee manages to hone in on the most compelling topics being explored, he does so with a grand perspective. It’s not just the trademark dolly shots or the harsh cutaways to real-life imagery against the fictional story. It’s looking at how the poisonous influence of American wealth has corrupted the soul of countries and communities, and how it manages to find itself responsible for so many evils even after it has seemingly been buried and forgotten. This toxicity is juxtaposed against a history of Black exceptionalism that continues to fight for their own independence and freedom. It’s true that not all of these ideas are explored neatly, and the unwieldy nature of the story often leads to moments with a muted catharsis. However, the effort is still admirable, and Lee manages to craft a thought-provoking piece that is mostly engaging.

Even when sections of the film struggle to find an authentic connection, much of that is compensated by the performances. The core cast has a believable camaraderie with one another, and their chemistry brings a great deal of energy to even the dullest of scenes. Among them, Delroy Lindo is the one who exceeds at inhabiting a character that portrays a complicated depth. He embodies Paul with an off-putting intensity that is also incredibly empathetic, as a soldier torn apart by guilt, greed, and PTSD. He is by far the most fascinating performance and is incredible to watch in every scene. Peters, Lewis, and Whitlock all bring their own charms to their roles with varying degrees of success. However, they still keep the interplay between these men the most alluring sections of the film.

Around them is a supporting cast that is more than capable of delivering fine performances but not given roles that suit them well. Jonathan Majors is a great talent (as seen last year in “The Last Black Man In San Francisco“) and showcases some powerful emotions in his scenes, particularly the ones shared with Lindo. However, his character never feels set up properly and every insertion into this plot comes across as awkward. It is by the sheer force of his performance that he makes these moments as successful as they are. A group of activists in the region briefly cross their path (which includes a reunion of “BlacKkKlansman” stars Paul Walter Houser & Jasper Pääkkönen), but they don’t add that much to the narrative nor are their performances exceptional. The same goes for Jean Reno as a shady businessman who harbors little nuance in his own portrayal, as well as Chadwick Boseman as the deceased squad leader who makes shockingly little impact. There are good actors surrounding the edges of the main players, but they are nowhere near as impressive.

Even with a film that is littered with inconsistent pacing, sloppy storytelling, and noticeable bloat, there is still something of value to find within “Da 5 Bloods”. Most of the performances are engaging, particularly from Delroy Lindo, who delivers a showcase turn worthy of awards recognition and there are some technical elements that dazzle, most notably Newton Thomas Sigel’s dynamic cinematography. However, it’s the talents of Spike Lee that can still draw in an audience. He finds an alluring thematic commentary that explores the struggle of Black independence against American oppression, all wrapped within a tense treasure hunt. Like many of his previous films, it doesn’t always come together neatly in the end. Still, there’s no denying the unique voice it represents. Such a voice is one that is valuable even after all the decades it first rang out.