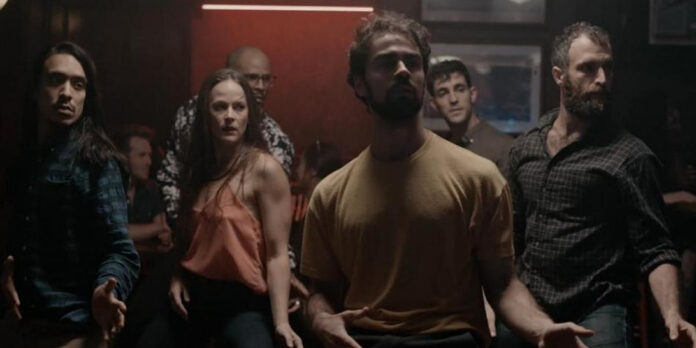 THE STORY – After meeting online, transatlantic lovers Aviva and Eden embark on a tumultuous courtship, love affair and marriage. The couple struggles, separates, and tries to get back together, as dual aspects of each one’s personality battles forces inside and out.

​​​​​​​​Difficult relationships have been fodder for films practically since the invention of the medium. By 2020, we have seen so many films about two people coming together, falling apart, and maybe coming back together again that it seems like old hat. We can probably find the exact minute of a film’s running time where the major plot points happen and know more or less what they will look like. Thank the Lumière brothers, then, for Boaz Yakin’s new film “Aviva,” which takes that familiar storyline and makes it explode from the inside, opening up into a story of identity, sexuality, and love the likes of which we have never seen before.

Aviva” is the story of the relationship between a woman named Aviva and a man named Eden. They are introduced by a mutual friend, but Eden lives in New York and Aviva lives in France, so all they have of each other are letters and phone calls. When Aviva finally comes to New York, they become a couple and, over time, realize that something is keeping them from fully being with each other. Not too different, in basic plot, from any number of other films that have come before. But Yakin has made the bold choice to have Aviva and Eden be played by both a man and a woman (Zina Zinchenko and Or Schraiber play Aviva, while Bobbi Jene Smith and Tyler Phillips play Eden). The performers switch out between and within scenes, sometimes even speaking amongst themselves as they do so. They’re meant to represent the masculine and feminine sides of each person, and while this could feel schematic and intellectual, once you acclimate yourself to what the film is doing it becomes a viscerally emotional experience. We get to experience a relationship in a way we never have before, from within and without each individual, lending scenes that would feel basic in other films a uniqueness that makes us feel the full weight of the drama.

This doubling also opens the film up to numerous interpretations about sex and sexuality, gender fluidity, and gender performance, making it feel like a perfect film for this particular moment in history, where many people are grappling with these issues of identity out in the open for the first time. It’s an extremely high-risk concept, and Yakin goes perhaps a bit overboard in how the screenplay explains itself. “The film begins with Smith, naked, explaining that not only will she be playing a man, but that, because dance is such an integral part of the film, all the actors in the film are actually dancers.” (Because dance was going to be such an integral part of the storytelling, the filmmakers decided it would be better to cast dancers who could act than actors who could dance.) While the metafilm touches are easily the weakest part of the film (although Yakin does make some powerful use of direct address), the decision to cast dancers pays off in spades.

Smith, the subject of the outstanding 2017 documentary “Bobbi Jene,” is like a magnet for the eyes – her charisma is so strong that it’s near-impossible to look at anything else when she’s on-screen, especially when she’s dancing (a solo where she dances out Eden’s trip from NYC to LA – airport security scan and all – is particularly stunning). Zinchenko has a similar aura around her, too. It’s easy to understand why Eden is both so attracted to and so frustrated with Aviva when Zinchenko manages to play her as a more grounded, sadder version of the manic pixie dream girl archetype. Schraiber gets to play the less sad side of Aviva and captures enough of Zinchenko’s boho energy that they really do feel like two halves of the same person. It’s Phillips who has to carry most of the dramatic weight of the film, though, and he proves more than capable, completely selling the way Eden’s masculine side turns on his feminine side in the film’s most conceptually demanding scenes. While no one in the central quartet is the most expressive actor, they’re able to summon up some powerfully emotional close-ups that make the audience feel for all four of them.

Then, there’s the dancing. The dance sequences in “Aviva” are nothing short of spectacular. Choreographed by Smith and Schraiber themselves, each one portrays a different feeling: An almost mating ritual-like dance for Eden (in female form) and his (all-male) friends in a bar; a pair of intertwined solos for Eden and Aviva that connect them across an ocean and leads to them finally uniting in America; an ecstatic explosion of a joyous wedding dance that mixes masculine/feminine and traditional/modern styles; an almost cartoonish hip hop strut for Eden’s younger self, and others, which all culminate in a glorious finale that mixes bits and pieces of each of them into a breathtaking and heartbreaking whole. The camera is uniquely attentive to the performers’ bodies in the space, following the action deliberately but fluidly. Yakin gets the best out of DP, Arseni Khatchaturan, and editor, Holle Singer, putting the audience in the exact right spot for each moment of every dance. The dance sequences vibrate with energy, like an electric current flowing between the screen and the audience.

This is something that applies to “Aviva” as a whole: It’s completely unlike anything else. That alone would be enough to recommend it, but the care Yakin, his creative team, and the performers have taken to ensure that every risk pays off is truly astounding. By rights, this should be an interminable, pretentious slog. Instead, “Aviva” is an example of experimental filmmaking that’s still accessible to an audience willing to pay attention. That may be a bit much to ask of a moviegoing public stuck inside on their couches or protesting in the streets for basic human rights. But those who watch will be rewarded with something that feels new, and in some ways, even revolutionary. “Aviva” is easily one of the best and most unique films of this or any other year.