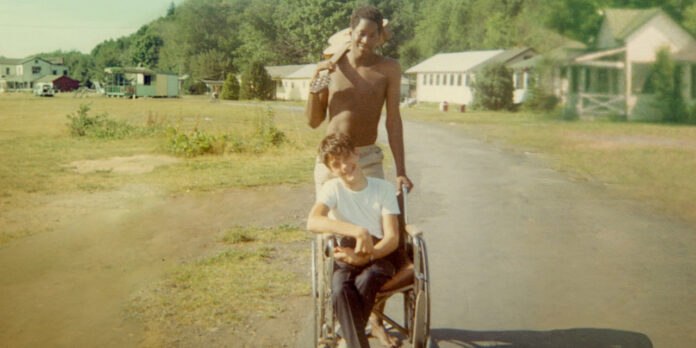 THE STORY – A groundbreaking summer camp galvanizes teens who have disabilities.

1/25/2020
By Casey Lee Clark
​
​​​​The Obamas’ Higher Ground Productions have followed up their Best Documentary Oscar win for “American Factory” with another Netflix doc that will hopefully also show them great critical and awards success. “Crip Camp: A Disability Revolution” was one of my favorite films from Sundance 2020.

In the early 1970s just outside of Woodstock, Camp Jened was founded as a summer camp for disabled teens to connect and have a place to express themselves without feeling ostracized by their able-bodied peers and the general public. We see a lot of old black-and-white footage from 1971, including interviews and discussions with various campers about their upbringing, their thoughts on life as a disabled person, and the budding relationships and friendships happening at the camp. As the film progresses and the campers grow up and move on with their lives, we find a majority of them convening in Berkley, California. What follows is the rise of these young people as political activists, shaping the disability rights movement, and ultimately, leading to regulations on Section 504 of the Rehabilitation Act of 1973 (eventually the Americans with Disabilities Act in 1990).

The film does a great job of letting the narrative unfold naturally, allowing its more political messaging and storyline to come as a pleasant surprise. It’s always engaging and interesting, never feeling slow or boring by any means. It incorporates a standard (but affective) documentary trope of following the lives of various campers and exploring their own stories within this larger narrative (including co-director and former camper Jim LeBrecht). This is especially effective as the documentary follows Judy Heumann, growing from a bright-eyed and ambitious camp counselor to a political organizer and Civil Rights leader. This documentary shows that she’s someone whose name should be remembered amongst other great Civil Rights pioneers, and her personal growth is one of the film’s highlights.

The film also looks at the hippie movement and sexual revolution through the eyes of the disabled community and how they felt amongst that movement and the changing times. The film has quite a few cheeky and funny moments as its subjects all discuss their sexual awakenings at the camp and clips are shown from that time, including a rather hilarious crabs outbreak. It also puts that Netflix budget to good use with an impressive ‘60s and ‘70s soundtrack.

The film ultimately works well and is so engaging and endearing because of the sheer amount of honesty shown by everyone involved. There are a lot of discussions on their perceptions of being disabled, hierarchies within the disabled community, and a great deal of painful injustice recounted and shown. It wins you over from minute one as it’s filled with so much heart and you find yourself falling in love with these wonderfully charismatic people.

As an able-bodied person, and as someone who grew up in a post-ADA world with accessible schools and whatnot, I found myself pausing and reflecting on my privilege and ignorance on the subject. It made me want to take a step back, listen, and recognize the struggles and circumstances that I wasn’t fully aware of because of my situation. “Crip Camp” is about the importance of accessibility and accommodation and asks that able-bodied people recognize others’ disabilities and properly accommodate them. It shows that, while a lot of progress has been made in regards to disability rights and accessibility, there’s still a lot of work to be done, and a lot of people (myself included) could benefit from just listening and doing anything we can to help.