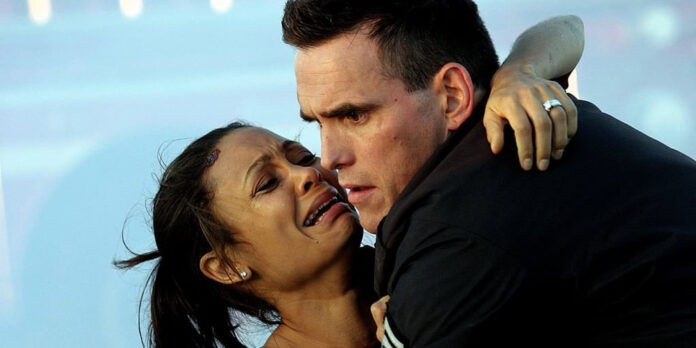 Paul Haggis’s 2005 multi-character moral drama is very likely the greatest case of a movie’s legacy not being defined by the awards it won, but by what it beat on its way to the podium. But I’m not here to talk about that today. We’re going to put aside all of the Brokeback-adjacent drama and just look at “Crash” as a movie. Is it deserving of all of the hate it gets to this day? No…but also not no. If ambition was an achievement, this movie would get high marks, but it’s in the execution that “Crash” fumbles.

A plot synopsis is difficult because there are upwards of a dozen separate storylines happening in this sprawling tale, but generally “Crash” paints a broad picture about racism in mid-2000s Los Angeles. The numerous storylines interweave and connect in various ways, showing the perpetrators and victims of racial thinking and the damage it causes. Notable characters include Matt Dillon as a racist cop, Brendan Fraser and Sandra Bullock as a wealthy couple in crisis, Michael Pena as a locksmith/caring father, Ludacris and Larenz Tate as politically-minded carjackers, Thandie Newton and Terrence Howard as a married couple victimized by Dillon’s cop, and Don Cheadle as a detective who has to make a difficult career choice. Their dramas play out until they, well, crash into each other and then deal with the fallout.

One of the more lauded aspects of “Crash” at the time of its release was its screenplay. Paul Haggis was apparently inspired to write the movie after his car was stolen from him in the early 90s, and he used the incident as a jumping-off point to explore racism in our modern world. All of the characters have opinions about other races, the idea of racism in general, or both, and they sure love to talk about it. The manner in which the characters toss off racial slurs and disparaging stereotypes is shocking from the very beginning of the film when a detective played by Jennifer Esposito mocks an Asian woman for her English pronunciations, and it doesn’t stop until the credits roll. Is it unrealistic for characters to be so flagrantly bigoted, regardless of who is around them? Perhaps. Is it subtle? Definitely not. But racism is also not subtle, and as cringe-inducing and questionable as some of the dialogue is to hear, if Haggis intended to shock his audience to the racial realities of our world, he is somewhat successful. The national conversation in 2005, at least in mainstream, white-produced media, was largely not about race, and many white people were content to believe we were living in a post-racial society. In fact, I’m sure many liberal Oscar voters who lived in LA at the time would agree with this. It was mostly unexpected for a major movie to say otherwise, at the time. So while the execution is certainly debatable in its effectiveness, I have to begrudgingly applaud the film for talking about something that white Americans were mostly not talking about.

Another element of the film that is worthy of praise, for the most part, is the performances. Matt Dillon received the most awards attention of the cast, and he is especially good in the scene where he confronts a black insurance agent, but overall I find him mostly serviceable. The two best performances come from Michael Pena and Thandie Newton. Michael Pena is ridiculously endearing in his role as a devoted father, and he easily makes the best of his limited screen time. And Thandie Newton is extraordinary in the juiciest role in the movie. She handily portrays a woman who has to be at the height of her emotional range in nearly every minute that she is on screen, and it’s never unrealistic or over-the-top. Other standouts include Ludacris, who does his very best with several annoyingly preachy monologues, and Ryan Phillippe as a young cop struggling to better his workplace. On the other hand, I find Brendan Fraser and Sandra Bullock to be fairly one-note. Bullock, in particular, is tasked with playing an extremely unpleasant character, and never quite manages to find variance in her anger. But overall, the ensemble works together and plays off of each other well.

Besides the questionable dialogue, another consistent criticism leveled at “Crash” is that it fails in its attempt to “solve” racism. However, I do not think that is the movie’s intention at all. Nearly all of the characters end up worse off than when the movie started, either because of their prejudice or from the hatred of those with whom they interacted. None of the characters are going to have a good day tomorrow. They’re most likely not going to change, this is just another bad moment in their lives and those who need changing aren’t redeemed or absolved of their bad behavior, for the most part (Dillon’s cop seemingly gets to wash his hands of a sexual assault he perpetrates, which is fairly unforgivable on the screenplay’s part). I believe the movie is simply trying to paint a picture of racial struggle that a lot of people are comfortable ignoring, and it shows the after-effects of this type of discrimination. However, that may not be a much better explanation of the film’s intentions, and it’s also not unfair to say that that is an unsatisfying or unhelpful story to tell.

So does “Crash” actually work? I think not. Even with all of my explanations and rationalizations for what the movie is trying to do, I still think it does not overcome its lofty ambitions. Hampered by unrealistic dialogue and unpleasant characters, it delivers its portrayal of a world that needs changing in the most aggressive and obvious way possible.