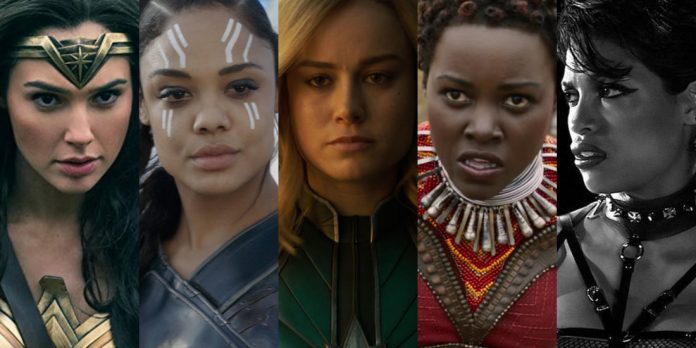 The 21st Century has seen several attempts by studios to bring female Superheroes to the form, both in leading and supporting roles. While rarely in the titular role, these female characters have worked alongside and, in many cases, upstaged their male counterparts. Some carry mystical and supernatural power and some just simply kick-ass. With the release of “Captain Marvel“ this weekend, we thought we would examine some of the best female superheroes the 21st century has brought us.

​Without any further adieu, here is our list of those who imbue those qualities the best from the 21st Century.

So technically, a graphic novel but the medium is close enough to sneak this pick in. Rosario Dawson is at her finest in this role as the leader of the Girls of Old Town. Although she is highly sexualized in the role that ostensibly seems primed only for the male gaze, there is something empowering about a group of women who defy social norms to create and protect their own community and freedom. Gail wields her sexuality as a power to create a safe space for the other “girls” and her dedication shows a care and strength that is worth note and caught my attention.

Evangeline Lilly brings this brilliant prodigy to life by improving on her father’s technology while being powered by the spirit of her lost mother. With a dedicated focus she risks her life for the discovery of truth and along the way manages to be the sole reason for Ant-Man’s existence. To say she is the better half is a cliché, but it fits in this context. In both “Ant-Man” and more prominently in “Ant-Man And The Wasp” Evangeline Lilly constantly steals the show and gives us a character who is more than just a side-kick but a worthy equal (as evidenced by the second film’s title) to the film’s titular role.

Who says love is a weakness? Although Gamora (Zoe Saldana), starts her intergalactic journey on screen hellbent on showing her independence and strength, it is her connection to both Peter Quill and her adoptive father, Thanos where the true depth of her courage is displayed. The character and performance by Saldana culminate beautifully in “Avengers: Infinity War” in a focused arc that effectively spans three films.

We all know Tessa Thompson is cool, but as Valkyrie in “Thor: Ragnarok,” she introduces us to the fallen hero in the most unexpected of ways. She matches wit and strength with the likes of Thor and almost steals the show. As a born warrior, damaged by the weight of the world, her likability evolves with the film and by its conclusion we see her in a much more developed light.

This foul-mouthed, 11-year-old, anti-hero trained to kill and protect by her father (Nicholas Cage) was a refreshing surprise in 2010 when our world of comic book films was much more muted. Chloe Grace-Moretz captures this gender and limit defying character in a way that makes you often forget she is existing in a world well beyond her years.

Famke Janssen took on the magnitude of embodying the Mutant world’s most powerful and dangerous force in the first three “X-Men” films and one final time in “X-Men Days of Future Past” (2014). Although not always at the forefront, her presence and power remained visceral in the story-telling.  A reluctant and tormented hero, with never a small moment when her power is unleashed, Jean grey has always been an important piece to the X-Men story. Now played by Sophie Turner (“X-Men: Apocalypse” & “Game of Thrones”), she will be revising her role as young Jean in 2019’s “Dark Phoenix”.

The most consistent female presence in the cinematic Marvel Universe to-date with the most film credits due to showing up in the “Iron Man,” “Captain America” & “Avengers” films, Scarlett Johansson has shown us many sides to this integral character. Alongside the supernatural, this very human trained fighter uses her head and her skill to match toe to toe with enemies far beyond what should be possible. There have been some inconsistent and problematic elements to her story arc due to her participation in multiple films helmed by different writers and directors, but ultimately, she stands tall as a force who took her own trauma and manifested into power, human yes, but nevertheless unimaginable power.

Although former portrayals of Mystique exist, it is the character as played by Jennifer Lawrence that makes our list. Written over several movies we capture the complexity of this character both in mutant form and as her alter ego, Raven. Although, her decisions may not always be for the common good she remains true to herself as she navigates the confusion of an unloving and unaccepting world. She channels this energy for good and for bad making her unique to this genre and absolutely unforgettable despite Lawrence’s growing disdain for portraying the character. She’ll likely make her final appearance in the upcoming “Dark Phoenix” film.

We couldn’t choose between Nakia (Lupita Nyongo), Okoye (Dania Gurira) and Shuri (Letitia Wright), so we decided to include them all as a single entry. Together, each are a perfectly realized and cast trio of unstoppable force in Ryan Coogler’s highly influential and powerful Marvel entry, “Black Panther.” Each character is equipped with their own unique skills, they bring the strength of a warrior, intelligence, invention, strategy, empathy, and stamina to create an empowering group of female characters that have inspired a generation. Responsible for much of the heart of this film, T’Challa would not stand a chance without them and let’s be real, WE would have been much less entertained.

It’s easy to see how “Wonder Woman” helped to pave the way for “Captain Marvel’s” upcoming success. The only female-directed character on this list, Gal Gadot’s Wonder Woman was a true inspiration and a full embodiment of all of the criteria that represent the best in female heroes. Born into her station and trained to her abilities by an amazing cast of Amazonians, Diana realizes her potential in the most compelling of ways. Through her eyes, we see the frustration and dissatisfaction of the follies of man and power but they do not stop in her journey to make things right, one person at a time. Brave, smart and dedicated while being unafraid of empathy and vulnerability. All of these qualities makes her a true leader and hero.

What do you think of our list? How do you think “Captain Marvel” will fair with this list of powerhouse women? Let us know in the comments section below or on our Twitter account.