“WRITE WHEN YOU GET WORK” 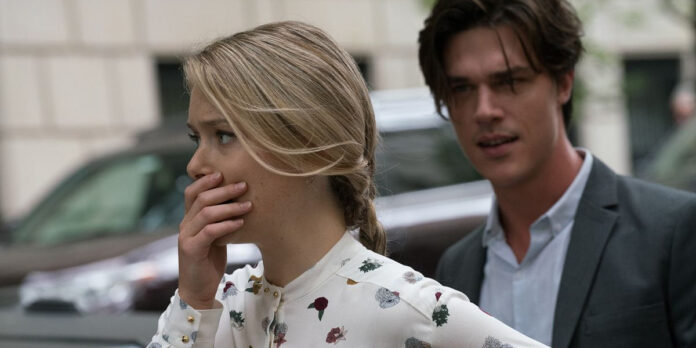 ​Some films showcase a potential for something that can be quite interesting in the way it wants to maneuver through a complicated story to arrive at a deeper truth about the world. These are generally stories that I find quite intriguing as they allow for the chance to explore a well-executed plot with some fascinating characters populating the world. There are occasions, however, when these types of films can run on the tedious side and become quite a chore to get through. Sadly, that’s what I felt throughout most of the runtime of this film.

The film centers on the intertwining paths of two former lovers and the plotting schemes between them. Ruth Duffy (Rachel Keller) is trying to move beyond her dysfunctional past life by working in the admissions office of an elite private school. Her ex-boyfriend, Johnny Collins (Finn Wittrock), barely gets by with a revolving door of meaningless day jobs and side hustles. After their tumultuous break up in high school, the two find themselves involved in a twisty plot that concerns a hedge fund manager under criminal investigation (James Ransome) and his charming but flaky wife Nan (Emily Mortimer). All these players come together to work with and against each other for an ultimate gain in the end.

There are many elements to the film that aspire to be something a bit more sophisticated than it actually ends up being and for that, it is quite a shame. I think there is something that can be appreciated in the way that Stacy Cochran directs the film, attempting to bring a soft intimacy to this story with characters always vying for distance. It certainly helps that Oscar-winning cinematographer Robert Elswit, shooting on 16mm, is at the helm. However, it is the screenplay that really lets the film down. The fuzzy mechanics of the plot are never really nailed down, and as such feels bloated and meandering. The story feels too concerned with the mechanics of its twisty narrative that it never settles on developing the character study within.

At the same time, those characters don’t have a particularly three-dimensional depth to them, and most of their revelations feel obvious and shallow. The tenuous connections they have to each other forces momentum to crawl forward, leaving little to care about and the ultimate stakes rather unclear. The motivations feel often difficult to track, which leads to some rough transitions between the scenes and a laborious pace. The flippant dialogue doesn’t come across as interesting as it seems to believe it is, and instead just provides fodder to move from one scene to the next.

Keller is decent enough for what the role asks of her, but there also is something missing from getting a full picture of this character. This could be said about most of the roles in the film, but it is particularly felt here. Her participation in the film’s story always feels valued but never certain of its effectiveness. Still, credit to her for giving a grounded performance that works well enough to compliment the film. Wittrock has been pretty strong in a lot of previous television work I’ve seen, but this is not particularly the case here. He comes across very wooden much of the time, especially with a brash New York accent that is purposefully affected but never fully realized. He doesn’t really provide the amount of charm and smarmy likability he is capable of delivering, and here just comes across as rather flat.

Truthfully, the only member of this ensemble who has any kind of life to their performance is Mortimer. While nowhere near her best work, there is a certain energy she brings to the role which immediately injects the film with a bit more passion. She inhabits a character trying to make the best of multiple bad situations and seeing her react to these circumstances are some of the few redeeming qualities. Even when the big reveals are laid out in the end, most of them only work when they involve her character. It’s a testament to how wonderful of a performer she is that she can make even the driest of material sing.

Ultimately, the film never veers into the territory to call it outright terrible, but at the same time does not ever make a lasting impact to deliver on its potential. The story has a lethargic nature to it that makes it difficult to connect to the intricacies it attempts to establish, leaving quite a distance from the emotional bonds of these characters. The performances, save for Mortimer, are not that compelling either and don’t really serve as a source of passion. All in all, it’s a noble effort to tell a tightly wound mystery with an intriguing character study at the center, but it mostly all just falls flat in the end.