“COLOR OUT OF SPACE” 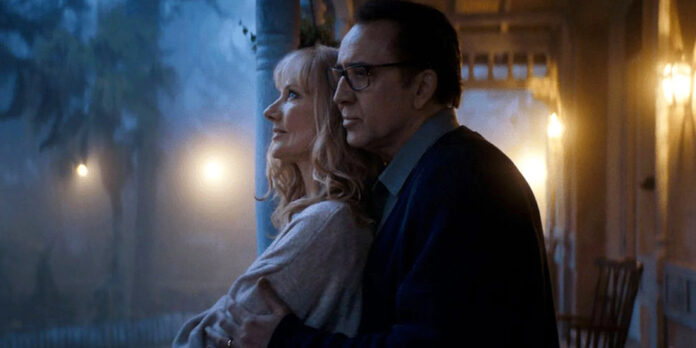 THE STORY – After a meteorite lands in the front yard of their farm, Nathan Gardner and his family find themselves battling a mutant extraterrestrial organism that infects their minds and bodies, transforming their quiet rural life into a technicolor nightmare.
​
THE CAST – Nicolas Cage, Joely Richardson, Madeleine Arthur, Q’orianka Kilcher & Tommy Chong​

​Nicolas Cage and his streak of appearing in wild genre films continues. His latest film, “Color Out of Space,” is a pulsating technicolor nightmare. It’s a cosmic tale from the mind of H.P. Lovecraft and adapted by director, Richard Stanley. It recounts the horrors in the aftermath of a night when a mysterious UFO hovered over an isolated family farmhouse, engulfing it in hues of blues, purples, and pinks. It leaves behind a meteorite, which soon melts away into the earth, infecting it. As the novel and film both illustrate: vegetation grows foul, animals are deformed grotesquely, plant life in mutated, and people slowly go insane. The film follows the Gardner family as they try to win a losing battle against this alien force.

A piercing score by Colin Stetson opens the film, as a narrator introduces the story of how he encountered the mysteries of the Gardner farm. Ward Phillips (Elliot Knight) is a hydrologist sent to survey the surrounding lake water. Through him, we are introduced to the first member of the family, Lavinia (Madeleine Arthur), as she is practicing a protective Wiccan ritual. We soon meet her mother and father, Nathan (Cage) and Theresa (Joely Richardson), and her two brothers, Benny (Brendan Meyer) and Jack (the adorable Julian Hilliard from “The Haunting of Hill House”). The film is very much style over substance as the characters of this family unit are written quite thin, unfortunately. We don’t learn that much about them other than Lavinia’s penchant for white magic, and that Theresa is struggling with her self-image post-breast cancer. Because of her mastectomy, Nathan and Theresa haven’t had sex in six months, and just when they’re about to, aliens show up (typical!).

The alpaca farm becomes surrounded by what can only be described as something like “Annihilation”’s “the Shimmer.” It’s a multicolor, semitransparent barrier that not only prevents the family from leaving the farm, but affects time and space, and mutates the animals and plant life within. Along with the infection of everything outside, everything inside the home becomes affected, too. An alien force manipulates the wireless signals from their cellphones, the light from any screen, and affects the family both mentally, and in an even more frightening capacity, physically. The body horror on display is some of the best of the year; however, the lighting and framing of certain scenes prevent the viewer from being able to fully appreciate the horrific transformations and be completely aware of what’s happening in those moments. This isn’t to say that Steve Annis’s cinematography isn’t good – there are some stellar underwater worm’s-eye view shots. As far as the cast goes, they all perform quite well, but it’s Cage who steals the show as a father in denial. He yells about his alpacas and puts on different voices like he’s doing impressions on a comedy tour. While he’s funny at points, his character’s denial creates an explosively dangerous dynamic in the home that forms in the aftermath of these mysterious events. He becomes unhinged, violent, and unpredictable, resembling that of “The Shining”’s Jack Torrance.

“Color Out of Space” is truly out of this world psychedelic. It’s worth a watch just for the visuals alone, with its anxiety-inducing and trippy SFX. It’s a tornado of color that often feels like you’re watching a 3D movie without glasses. And apart from its visuals, it’s a narrative that feels very much ahead of its time. Lovecraft was a man of horror and science fiction, but perhaps this alien force that he created was further away from fiction than he thought. Perhaps he was predicting the future. There is a force out there, something that would be alien to him, but to us, it has become reality. Both his force and the one we know are propelling the earth to fight back against humanity, and the end to our story may turn out to be the same, but without pretty color.