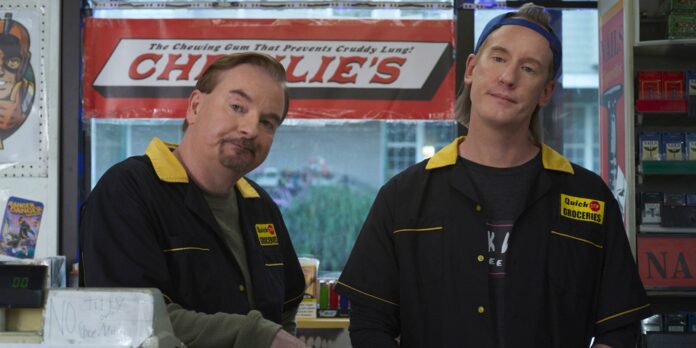 “Clerks” (1994) was the perfect debut for writer-director Kevin Smith. It was cheap, foul-mouthed, and full of personality. It was “Slacker” for screw-ups and the “Star Wars” fanatics. It established Smith as one of the preeminent voices of the indie boom, and it became a cult classic on home video. “Clerks II” (2006) was the perfect comeback for Smith. It was a triumphant return to form after a string of critical and commercial duds. It has more heart than the original yet still manages to bring the off-color quotables in spades. It’s the rare comedy sequel that fans consider to be on par with the original, despite coming out over a decade later.

So, what then, of “Clerks III”? (2022). Smith had already tempted fate by returning to the franchise once, and he impressed everybody. Could he do it a second time, a decade and a half after the fact? Yes, and no. “Clerks III” is a mixed bag. It’s not without its charms, but most of them lie in the emotional attachments we already have to the characters rather than the artistry and writing being displayed in this particular installment. The rest is filled with unfunny jokes and out-of-touch references.

It starts out solid enough: titular clerks Dante (Brian O’Halloran) and Randal (Jeff Anderson) open up their convenience store and shoot the breeze with employee Elias (Trevor Fehrman). Still, Randal’s mockery gets cut short when he suffers a heart attack and collapses. He makes a full recovery at the hospital, but the close call awakens his sense of adventure, and he sets out to make a movie that will celebrate his life.

There’s an emotional undercurrent to the premise that’s impossible to ignore. Smith suffered a heart attack after a comedy show in 2018, and one can safely assume that his brush with death was the jumping-off point for the script. The personal investment shows. The hospital exchange between Dante and Randal is legitimately moving, not only because O’Halloran and Anderson inhabit their characters so well (they’ve been at it for decades) but because Smith is writing from the heart and putting his own revelations into the mouths of his characters.

Little moments of emotional tenderness pepper the film. The chemistry between the two leads is predictably excellent, especially when they drop the smug pretense and delve into dramatic territory that challenges them. Randal’s desire to make lasting art is the driving narrative, but Dante gets plenty of emotional weight to shoulder through a subplot that involves a tragedy and a deceased loved one. This subplot is one of the reasons to see the film, though, so I will merely sing its praises and avoid specifics. The classic Dante line, “I’m not even supposed to be here today,” is brought back in a surprisingly devastating fashion.

When Smith tries to get funny, things fall apart, which is bad for a film billed as a “comedy.” The dialogue is the saving grace of the original and even sharper in the sequel, so it’s genuinely baffling as to why so many of the jokes here fall flat. The timing of all the characters, Jay (Jason Mewes) and Silent Bob (Smith) included, is off, and it doesn’t help that they look clueless talking about things like TikTok, Tinder, and NFTs. Smith has always been a pop culture junkie at heart, but his earlier scripts show that he can incorporate references into conversations that make sense or at least make for a smart punchline. The mad rush to cram in phrases like “Gen Z” and “woke” within the first ten minutes makes “Clerks III” feel like the film equivalent of the Steve Buscemi “How do you do, fellow kids?” meme. It’s trying too hard to seem current when it should be trying harder to be funny.

There’s some cute meta-commentary to be gleaned here, especially if you’re familiar with Smith’s background and the fact that he based “Clerks” on his own personal experiences. I like the line about not being able to make regular people into movie stars and then immediately cutting to Mewes, who Smith literally transformed from a regular person to a movie star. Still, the film’s execution is consistently underwhelming and frequently fails to hold up without the context of what came before. (There are some cameos here that will make you sit up and others that won’t.) There are also too many camerawork/show business bits that feel like rejects from Smith’s own “Zack and Miri Make a Porno” (2008).

“Clerks III” is at least better than “Jay and Silent Bob Reboot” (2019). Both films go overboard when it comes to referencing past installments and the larger View Askewniverse, but “Clerks III” has emotional depth to balance out the bad jokes. It’s not a recommendation but a tacit acknowledgment that there are several powerful moments scattered amongst the meh-ness.

"CLERKS III"<b>THE GOOD - </b>There are some clever references to the first two films, and the arcs of Dante and Randal result in some of the franchise's most emotional moments.<br><br> <b>THE BAD - </b>The jokes are consistently unfunny, and the attempts to implement modern pop culture feel painfully forced. <br><br> <b>THE OSCAR PROSPECTS - </b>None<br><br> <b>THE FINAL SCORE - </b>5/10<br><br>