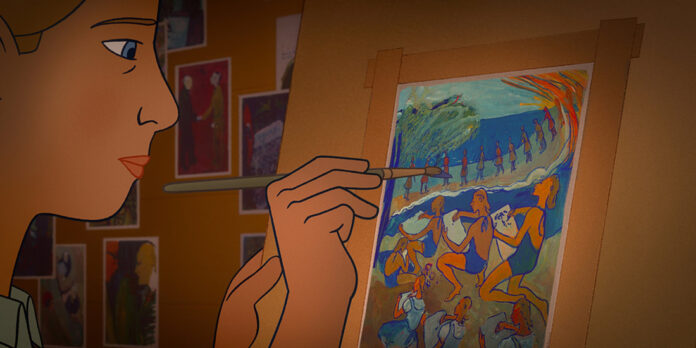 THE STORY – Charlotte Salomon, a young German-Jewish painter, flees Berlin on the eve of the Second World War and attempts to reinvent herself in the South of France.

Despite her indisputable impact on the art world, Charlotte Salomon and her contributions to the medium are often overlooked, with her tragic tale and triumphant work being lost to time. That is a wrong that directors Éric Warin and Tahir Rana and writers David Bezmozgis and Eric Rutherford seek to right with their animated World War II drama “Charlotte,” the first film ever to attempt to bring her story to the masses. In the end, though, the movie may be seen as a bit muted from an artistic standpoint. However, the stirring and sensitive script and commendable voice cast still suffuse this cinematic retelling of Charlotte Salomon’s struggles with soul and sincerity, making such an attempt a mightily effective effort when all is said and done.

When the film starts, the Jewish Charlotte (Keira Knightley) is living through a tense time in Germany where Hitler is slowly but surely coming into power, and the Nazis’ influence is increasing. Nevertheless, she secures a spot at the United States School for Pure and Applied Arts, where she sharpens her artistic skills and finds herself falling for handsome professor Alfred Wolfsohn (Mark Strong). Sadly, Salomon is soon unexpectedly expelled due to anti-Semitism. As the Nazi assault advances, her parents send her to live in hiding in the south of France with her grandparents (Jim Broadbent and Brenda Blethyn). There, Salomon summons the strength to start her most famous project, “Life? or Theatre?” while simultaneously striking up a romance with amiable house hand Alexander (Sam Claflin), as this new love interest further inspires her work.

No slight summary of this film can do Charlotte Salomon’s story justice. The obstacles she overcame to bring forth her brilliance must be seen to be believed as so many of “Charlotte’s” most moving and memorable moments come out of the blue and compel us to ask ourselves how one human being can still push on after surviving so much peril and pain. Some may find Rutherford and Bezmozgis’ script to be relatively surface-level and simplistic – never digressing from straightforward depictions of the significant events in Salomon’s life – but the drama is always riveting enough regardless, as the chaos of Charlotte’s coming-of-age makes for quite a captivating cinematic odyssey. Additionally, the cast’s poignant vocal performances enliven the proceedings considerably, with Knightley convincingly inhabiting the identity of young Charlotte, Broadbent comedically characterizing her perpetually grumpy grandfather, and Strong pleasantly personifying her first love.

However, while passable and never poorly rendered by any means, the film’s animation style is more generic than this great figure deserves, lacking in an audaciousness comparable to the artist’s herself. It is hard not to imagine what an approach similar to the one taken in “Loving Vincent” might have added to this historical retelling. The characters and settings resemble the look of Salomon’s art, resulting in the movie feeling like a byproduct of her genius. As it stands, the film is never remotely an eyesore, but it is devoid of the imagination one would expect for a drama about such an iconically creative individual. In fact, a larger focus on Salomon’s art is perhaps the one major note that can be applied to the movie as a whole. While we do eventually see “Life? or Theatre?” for ourselves – and post-film interviews speak to her significance – a more equal balance between scenes of Salomon’s suffering and her skillfulness as an artist might have better represented her in her totality.

Regardless, “Charlotte” mostly gets the job done when it comes to familiarizing modern audiences with the art of Charlotte Salomon and the adversity she endured with its solemn but sweeping story of loss and love. Even if its style or structure isn’t ever as subversive as its leading star, “Charlotte’s” sentiment continually rings true. It proves to be profusely affecting, mainly thanks to the emotional efforts of a universally committed voice cast.