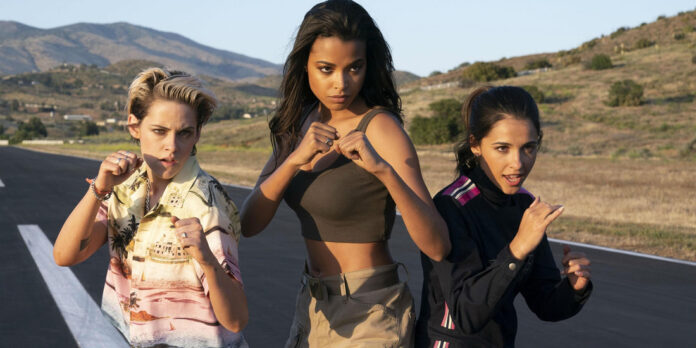 THE STORY – A brilliant scientist invents Calisto — a sustainable energy source that will revolutionize the way people use power. But when Calisto falls into the wrong hands, the Angels must retrieve it before it can be used as a weapon of mass destruction.
​
THE CAST – Kristen Stewart, Naomi Scott & Ella Balinska
​
THE TEAM – Elizabeth Banks (Director/Writer)
​
THE RUNNING TIME – 119 Minutes

​​Elizabeth Banks has been a solid presence in comedy films for more than a decade. Making her directorial debut in 2015 with “Pitch Perfect 2,” her latest film “Charlie’s Angels” finds her expanding her skills to include screenwriting, and the film is all better for it. What started as a popular and somewhat problematic show in the ‘70s – known for its sexy butt-kicking stars that included the idol of the time, Farah Fawcett – has been turned into a light, feel-good comedic action film that embraces the bad and the good of the original concept, and tries to turn it into something that respects the women in the story without allowing that to limit its storytelling potential.

The film opens with Sabina (Kristen Stewart) seemingly on a dinner date with a handsome man, Jonny Australia (Chris Pang), that quickly turns into a bust when the rest of the Angels show up to take him down for embezzlement of refugee funds. The first real mission we see the Angels Sabina and Jane (Ella Balinska) embark on, however, revolves around helping a scientist prevent the release of a new power device on the world market. Elena (Naomi Scott) has found an easily exploitable flaw in the invention, and when their initial meeting is interrupted by a formidably skilled assassin, the Angels and their leader, Bosley (an assigned title in the organization) played by Elizabeth Banks, are convinced the situation is far more complex than initially thought. As the women unravel the layered plots complete with betrayal and suspicion on all sides, they grow closer and learn to trust in each other, while revealing their hidden selves beneath their professional spy exteriors.

Since the stories they tell are usually predictable and simplistic, an action-adventure film relies on the charisma and relationships between its main characters. The quartet of Kristen Stewart, Ella Balinska, Naomi Scott, and Elizabeth Banks works so well that it makes up for the weaknesses of the story. While she isn’t the focus, Kristen Stewart steals the show as the troubled, playful, and hedonistic Sabina, but Ella Balinska’s Jane provides a strong center to the group. As the newbie to the Angels environment, Naomi Scott is the audience avatar, allowing the film to fill in the background without feeling like it’s caught up in an info dump. Elizabeth Banks plays the somewhat aloof seasoned advisor, but her enigmatic acting perfectly fits the needs of the story. All four play integral parts in the film and are each given their time to shine, leaving audiences plenty of characters to identify with by the end.

To be clear, “Charlie’s Angels” is an absolutely ridiculous and fun film that embraces its campy origins, while trying to provide something new and interesting to modern audiences. For those who enjoy action-adventure, but would like to see what they can be through the lens of a female perspective, this will fulfill most of that desire. The acting and action scenes are equally well done, and while the plot is thin, it does its best to keep viewers guessing right up until the final big set-piece. “Charlie’s Angels” is an admirable contribution to the franchise whether or not you have seen or enjoyed any of the previous entries. ​