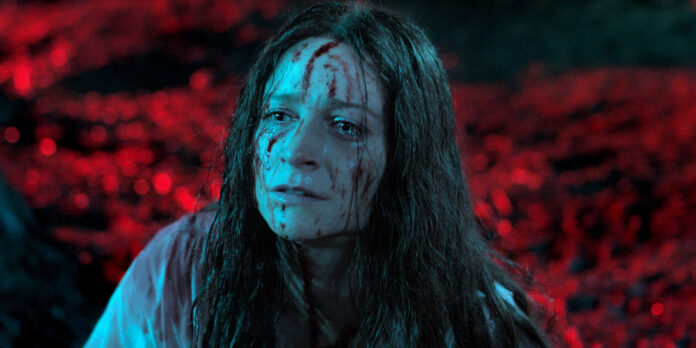 THE STORY – Film censor Enid takes pride in her meticulous work, guarding unsuspecting audiences from the deleterious effects of watching the gore-filled decapitations and eye gougings she pores over. Her sense of duty to protect is amplified by guilt over her inability to recall details of the long-ago disappearance of her sister, recently declared dead in absentia. When Enid is assigned to review a disturbing film from the archive that echoes her hazy childhood memories, she begins to unravel how this eerie work might be tied to her past.
​
THE CAST – Niamh Algar, Nicholas Burns, Vincent Franklin, Sophia La Porta, Adrian Schiller & Michael Smiley

​​I can’t tell you how many horror films I’ve watched that start out with a clear, strong concept but can’t maintain that vision for the entire runtime. As a huge horror fan, it’s a frustratingly common occurrence. Luckily, Prano Bailey-Bond’s “Censor” avoids that common pitfall. It’s captivating and creepy from start to finish thanks to, among other things, its terrifyingly magnetic lead performance and its well-defined, effective visual sensibilities.

Our main character is Enid (Niamh Algar), a film censor working in Margaret Thatcher’s England. The film centers around a specific and odd time in film history: the era of the video nasties. These were violent, exploitive films, usually horror, which were looked at by many as a sign of social depravity. Many of these films were outright banned, leading to a curious black market of underground videotape distribution. Enid is almost too good at her job, taking the responsibility more seriously than anyone else in her office. But when a film brings to mind her long lost sister, Enid’s carefully put-together world begins to unravel.

While it takes place in the 80s, the film wisely doesn’t cloak itself in the retro look of the era in a way that would distract. It calls to mind this time period through subtle costuming and production design, and of course, through the glimpses of video nasties that we see. But “Censor” is firmly a product of the 21st century, which helps to distinguish the character’s reality from the movies she has to watch for her job. Eventually, this starts to slowly change in a way that makes it unclear both to the audience and to Enid what exactly is real and what’s not.

As Enid, Algar is fantastic. She plays a character who has created a specifically curated life in direct defiance of her traumatic past. Her buttoned-up performance helps sell the idea that Enid has chosen to work in censorship as a way to control a world that so severely betrayed her in her childhood. It’s well-layered and tortured work, and it makes the moments where her exterior cracks and we see the pain underneath all the more upsetting.

In terms of its scare factor, “Censor” is more content to create an unsettling world which its tormented character inhabits rather than making the audience jump with any kind of consistency. That’s not to say it didn’t make me feel a sense of dread and apprehension throughout. I just wasn’t tossing my popcorn in fright. This understated style also helps to make its horrifying moments even scarier. Overall, it’s a meta-minded movie about horror films and how they merely reflect the darker impulses of humanity rather than creating them out of thin air. At the same time, it points to the absurdity of censorship and the impossibly utopian world-view towards which it seems to be aiming.

“Censor” is a balm for the soul of horror fans who has been subjected to empty, hollow pastiches of 80s horror for years. Prano Bailey-Bond has crafted an effective work of commentary that explores the very nature of horror and how we look to it for catharsis.