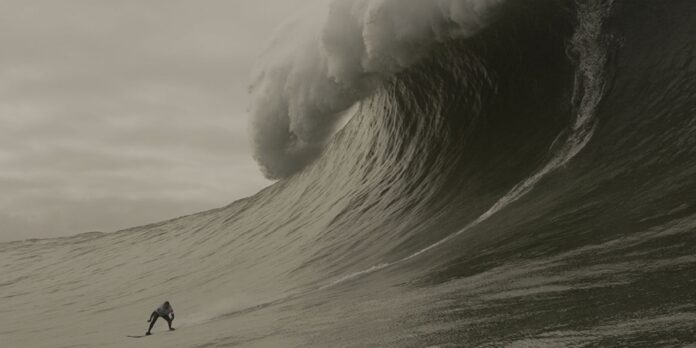 One of the most incredible big wave surfer champions of all time is getting her due in director Stephanie Johnes’ “Maya and the Wave,” an uplifting documentary about Brazilian surfer Maya Gabeira and her extraordinary dream come true. The doc follows Maya’s resilience and courage in tackling gigantic waves in a sexist, male-dominated sport. Her journey stands out among an ocean of sports documentaries, not only because she is an interesting subject but because the director allows her vulnerability to be seen.

Whether pessimistic about the future of her career or feeling low just days after the rush of a successful wave ride, Maya is driven by fear of the ocean. One would not expect fear from how Johnes introduces her. Maya is first presented as the picture of invincibility. Snapshots of her reputation in the media show a young woman of many accolades. She has won awards, graced the cover of magazines, and accepted honors for her achievements in surfing. As “Maya and the Wave” progresses, so too does the realistic deconstruction of her image into one that is flawed and human. Johnes’ intimate direction puts you in Maya’s corner when few people were there. Knowing how much Maya Gabeira has overcome, watching “Maya and the Wave” reach its gratifying conclusion is one of the most celebratory moments captured in film this year.

The documentary explores Maya’s adrenaline rush towards success and the roadblocks along the way that brought on the lowest points of her career. Ever since she was a child, she chased adrenaline, keen to experience activities that tested her physical stamina. But when it comes to professional surfing, this is more than just a rush. When Maya held her first surfboard, she felt like she belonged somewhere. This was her dream, a deep part of her identity she had to fulfill. She overcame her fears through rigorous discipline and training to catch some of the most giant waves anyone has ever caught. Maya’s abilities speak volumes alone, but they are made practically invisible in a male-dominated sport. Johnes does not shy away from the chauvinism embedded in the industry and its effect on Maya’s mentality.

When Maya arrives at a hotspot in Portugal called Nazaré, a monumental destination for surfers, male talking heads appear on screen to interject in dismissal of her presence. To paraphrase, they question why she is here and that she’s not that great of a surfer. Maya is constantly held to the bars men have set in the surfing world. Particularly from the perspective of women in this sport, one mistake is weaponized as an excuse to dismiss them, “proof” of their “limited abilities.” The documentary brings resonating focus to the double standards of who can afford to make mistakes in an industry where women are judged far more harshly. After Maya has a near-death experience surfing waves in Nazaré, she is suddenly viewed differently from the snapshot introduced at the beginning of the documentary. Men call her authenticity into question as if she has no business surfing professionally anymore, and one sees first-hand how this affects Maya. The strength of Johnes’ direction rests in focusing on the subject’s point of view – through Maya’s own words, one grasps how influential outside factors are on her physical and intellectual energy. The more you learn about Maya, the more specificity is given to who she is beyond what others expect of her.

The title of the documentary is what you get from “Maya and the Wave.” The focus is on Maya’s relationship to the water, rocky and calm in equal measure. Gorgeous photography of rising waves crashing to shore are hypnotic to watch. The visuals of the waves elicit different emotions, dependent on which point of Maya’s career is being explored on screen. For every moment of the waves evoking excitement and victory, some moments feel terrifying. The “wave” in the title represents more than just water. To paraphrase Maya’s father, Brazilian politician Fernando Gabeira (who frequently appears in the documentary as part of her loving support system), if Maya’s journey were just about the waves, it would be easy. The amount of physical and mental stamina required, not to mention the self-awareness of one’s abilities, speaks to professional surfing as one long continuous process for Maya. More than just a temporary rush, it is the manifestation of a young woman’s dreams. When Maya’s accident in Nazaré unfolds, through archival footage and panicked narration, this elicits fear of her dreams crashing down. But the sense of dread surrounding her future in professional surfing starts to melt away with Maya’s growing perseverance.

Maya was significantly inspired by her father – seeing his appearance in the Oscar-nominated Bruno Barreto thriller “Four Days in September” (1997) sparked her admiration for his courage. Courageous is a word used often to describe Maya in various moments of highs and lows as she overcame trauma. Following the Nazaré accident, she underwent multiple back surgeries and had a years-long road to recovery. The direction weaves together some gripping perspectives about this moment in Maya’s life. Throughout the documentary are visual references to the Red Bull logo, as Maya had a lengthy partnership with the brand. The logos are questionably noticeable at first. Only when Johnes digs deeper does one discover how much energy Maya put into creating experiences for Red Bull, only to feel used and drained by the company years later. Deemed “less engaging” during her time spent recovering from surgeries, the brand cut their support for Maya, citing she wasn’t giving as much energy to the brand anymore. Maya’s road to recovery was not just physical; her endurance of mental obstacles in moments where she felt alone are moving to watch.

Given the challenges Maya faced as a woman in a male-dominated industry, the most noticeable weakness in Johnes’ documentary is the overuse of men’s perspectives. There are plenty of male talking heads whose commentary takes too much control, particularly in the first hour. Their constant input of doubting Maya’s abilities becomes redundant when this message is communicated through the subject’s own words and experiences. There is a missed opportunity to hear more women’s perspectives from the surfing world as well. In keeping with telling a contained story about Maya, Johnes stays with her exclusively, giving voice to a young woman whose accomplishments had been disregarded for years until a wave of public support helped her towards more recognition. After multiple surgeries and a return to training, Maya reached the highest point of her career: surfing a 22.4 m high wave, and doing this in the same place she had her accident. It’s the biggest wave ever surfed by a woman, and it was ignored by the Guinness World Records (they hadn’t had a category for women’s best in the sport) until Maya herself started an online petition to get a response.

The documentary explores many dichotomies such as this – she could have the world’s most remarkable accomplishment and still be met with silence. She could experience some of the worst pain of her life and push through with newfound adrenaline. The relationship between physical and intellectual strength, between her achievements and embedded sexism undermining it, are driving forces of the story Johnes presents through her subject. “Maya and the Wave” amplifies the message: where the mind goes, the body will follow. In focusing on Maya’s vulnerability and inner endurance, what follows is an uplifting image of Maya and her reverberating impact on a younger generation of girls who now believe in the dream of being a professional surfer.