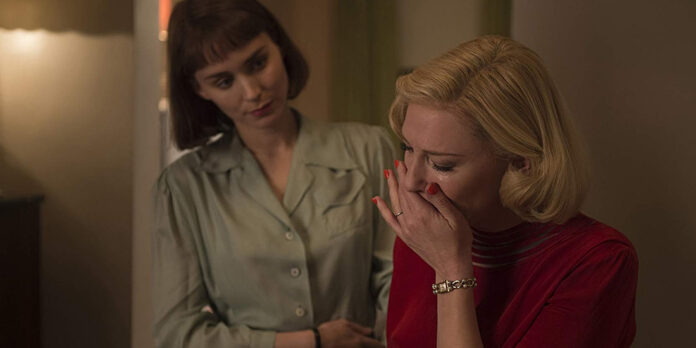 THE STORY –  Therese is a young woman in the 1950s whose life is changed forever when she meets Carol, an affluent older woman with whom she has an instant connection.​
​
THE CAST – Rooney Mara, Cate Blanchett, Sarah Paulson, Kyle Chandler & Jake Lacy​

​With “Carol,” Todd Haynes explores a side of 1950s America that most people of the time were happy to ignore. While it is undeniably romantic and beautiful, one of the more notable themes of the film is the necessity of repression, denial, and avoidance for queer couples at the time (and still to this day, in many parts of the world). In a way that reflects what the two lead characters are forced to do, Haynes keeps the audience intentionally at bay, using all the tools in his toolbox to get from the audience an empathetic feeling of being withheld from what we want to see in a romantic movie. The film is a masterpiece of melancholy longing that manages to miraculously avoid being devastatingly tragic or dramatic.

“Carol” tells the story of Therese (Rooney Mara), a young woman in the early 1950s who seems unsure of her path in life until she meets the titular character, played by Cate Blanchett. Slowly over the course of the film, Carol seems to unlock a romantic desire in Therese that even she may not have known was there. However, Carol is in the middle of a custody battle for her child with her soon-to-be ex-husband, and her burgeoning relationship with Therese may prove to be dangerous to Carol’s legal prospects.

As I mentioned before, this is a tale of desire in a repressed time with specific expectations of women, and Haynes never lets us forget it. There are several subtle references to Eisenhower’s impending inauguration in the form of radio announcements and television programs, a reminder to both the characters and the audience that the regime of conformity that would dominate the decade is only getting stronger. And from the restrictive hair, makeup, and costumes to the fact that Therese is seen working as a doll salesperson (the dolls can be seen as a representation of the matriarchal expectations placed on women), the film is a perfect visualization of the boxes that women are often confined to by a patriarchal society. These unending restrictions only serve to underline the fact that Therese and Carol’s relationship is hyper-forbidden in these times. Haynes drives home the sexist imbalance of societal norms even further by having nearly all of the male characters appear practically brutish in comparison to the female characters. The first moment of a character raising their voice is Carol’s husband (Kyle Chandler) yelling, and one male character even gets an entrance reminiscent of a horror movie villain when he sneaks up behind Therese at a motel ice machine. Haynes’s direction perfectly visualizes the feeling of anxiety the two leads must feel just by living the lives they want.

Similarly to his film “Far from Heaven”, Haynes seems interested in deconstructing 1950s cinematic conventions in “Carol”. At one point in the film, Therese and her friends are watching “Sunset Boulevard”, and one character remarks that he is “charting the correlation between what the characters say and how they really feel”. This serves as a key to Haynes’s view of the world that his characters are forced to live in. By nature of their relationship having to be secretive, Carol and Therese are often seen exchanging pointedly furtive glances and saying things to each other with a subtextual meaning. The film even begins and ends with the same scene played twice: a dinner scene between the two women. The first time we see it, we can only focus on what the characters are actually saying since we don’t yet know anything about these characters. But the second time we see it, now that we know these characters well, we can surmise how they really feel and what they truly mean by what they’re saying and what their physical actions indicate. Haynes’s masterful direction is perhaps the most remarkable aspect of this great film.

That’s not to say, however, that the other elements that make up this movie are not working overtime. The performances across the board are wonderful in their period-appropriate restraint. Blanchett masterfully portrays a woman who wants to be so much more than is allowed of her, expertly playing a grounded yet mysterious character. And Mara is subtle in her depiction of a woman unsure of how to express herself. It is a performance more interested in observing those around her than explicitly reacting, which is perfect when playing a character like Therese who looks to others for clues on how to behave and react. And the technical aspects of the film work in unity to depict the world Haynes wishes to show. The cinematography by Edward Lachman is especially noteworthy, with the endless shots of characters looking through windows or being captured behind glass adding to the idea of Therese as an observational character. Sandy Powell’s costumes also tell us even more about the characters than is evident in the script. For example, Carol, who comes from wealth, is seen in an endless parade of different costumes except for her expensive fur, the one costume piece she wears in multiple scenes, whereas Therese is shown as consistently wearing the same cheap winter hat. It is a beautiful film, not only in its story and themes but also in its visual elements.

The only critique I can make of this film is that it is fairly white-washed. Most of the film takes place in New York City, and in the crowd scenes on the street and in public, all that can be seen for the most part is a sea of white faces. This is simply not an authentic depiction of this city.

“Carol” is a practically perfect portrait of a time period that was more interested in conformity than true expression, and the film never lets us forget it. From its themes reflected in its visual storytelling to its deconstruction of 1950s film tropes, Todd Haynes has created a beautiful exploration of forbidden love and unspoken desire.