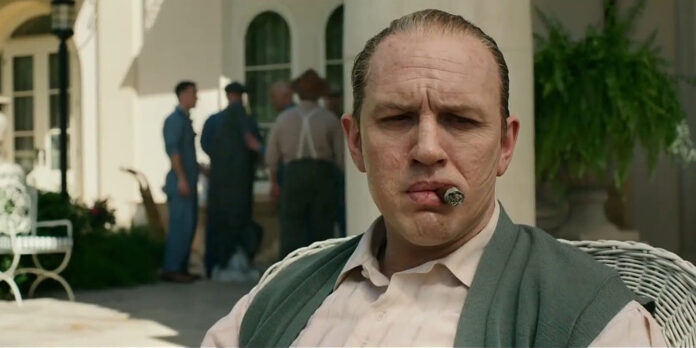 ​​​​​We have seen great villains on screen before. We have seen true-life villains on screen before. We’ve seen evil men who fascinate us with their complexity. However, the titular subject of “Capone” is a character that is so reprehensible, grotesque and utterly disgusting that it makes last year’s Joaquin Phoenix in “Joker” look like a saint by comparison. By the time I reached the end of Josh Trank’s gangster character study, I felt just as ill as the main character himself. Not even a typical “all-in” performance from Tom Hardy could save this one for me. It’s nasty and rotten, right down to its very core.

On Oct 17, 1931, Al Capone (Tom Hardy) is sentenced to prison for income tax evasion. After 11 years, due to his declining health, he is released to his expansive home in Florida under government watch (Jack Lowden plays an FBI Agent who is watching Capone’s every move with zero character development). “Capone” follows the last year of the famous gangster’s life, as he surrounds himself with friends and family (including his wife Mae, played by Linda Cardellini), plagued by dementia, syphilis and the sins of his past.

“Capone” started off with me thinking this story was going to be that gap in the “The Godfather Part III” between the main plot and the ending, where there’s a time jump to an older Michael Corleone dying in Italy. While the setup is there for a dark rumination and a reckoning for one of America’s most notorious criminals, Josh Trank has nothing meaningful to say about this story. It’s about one of history’s most fascinating villains and somehow someway, outside of some visually interesting sequences, Trank does absolutely nothing to tell us why he’s making this movie, what the ultimate takeaway is and why we should ultimately care. There’s no sympathy for Al Capone, despite the amount of torture his body and mind endures. It’s a grueling, slow, sickening march towards the finish line as we watch one man decay in misery, confusion, and horror. But where is the payoff? While Capone’s mind might be gone, the other people left behind in his life are not. It’s a painstaking hardship for any family member to deal with the slow decline of a loved one’s health but members of Capone’s family are not given the proper perspective nor the appropriate amount of screen time for us to see this movie through their pain.

Many people are wondering if Capone is putting on an act with his illness so that he doesn’t have to reveal the whereabouts of $10 million he has supposedly stored away. I too began wondering if Josh Trank was trolling us with this movie. The internet has had extremely passionate feelings towards movies like “Joker” for its portrayal of a dangerous character, asking us to have sympathy for him and what effect that may have on society. Well, here is a film now, in my opinion, where the hatred is completely warranted, as it lacks ambiguity for further discussion despite attempting to do something very different with the gangster genre.

Tom Hardy, covered in makeup and sweat, completely disappears into the role of Al Capone. His behavior, mannerisms, and especially his voice (the most Tom Hardy-esque voice you’ll ever hear aka. you cannot understand a single thing he’s saying) are all suited towards this version of Al Capone, which Trank wants to present to us. However, he’s lacking humanity and identifiable qualities which could give us a reason to at the very least pity him. But we don’t. We develop no emotional attachment to him at all. In what might be the only endearing moment of this whole dreadful experience, there’s a scene where Capone sings the Lion’s song “If I Were King Of The Forest” from “The Wizard Of Oz” as he watches it with his family in his private screening room. There’s a connection to his family members that Josh Trank wants us to feel as they continue to take care of him despite the bleak situation but that bond is never established with specific examples. Through no fault of his own, this will probably go down as one of Tom Hardy’s worst performances and I haven’t even gotten to the constant coughing, pissing, and shitting that the character does throughout the entire movie. Don’t worry though, I’m sure in time and as more people see this, the internet will cover this aspect of the movie in great detail with hilarious memes for all time.

“Capone” is shot very well and features some interesting sound mixing, with a brooding score which sets the mood well. I’ll give it that and that alone. There is a night club sequence involving trumpet player Louis Armstrong with Al Capone that is visually dynamic, atmospheric and distracts us for a bit from the otherwise bizarre and ugliness that this movie has to offer. All os which, is seemingly done to revolt us at every turn. Tom Hardy always has a disgusted look on his face in nearly every scene he’s in and that’s how I started to feel as well at Josh Trank’s latest misfire, disgusted. Over the top violence, unintentional comedy (Capone gets compared to Bugs Bunny at one point because he starts holding carrots in his mouth thinking they’re cigars), and a complete waste of a supporting cast, all pile on to create a monster of a movie that matches the monstrosity of Al Capone himself. In other words…it shits the bed. But hey! Don’t take my word for it. Vertical Entertainment has released the film on digital platforms so check it out for yourself.