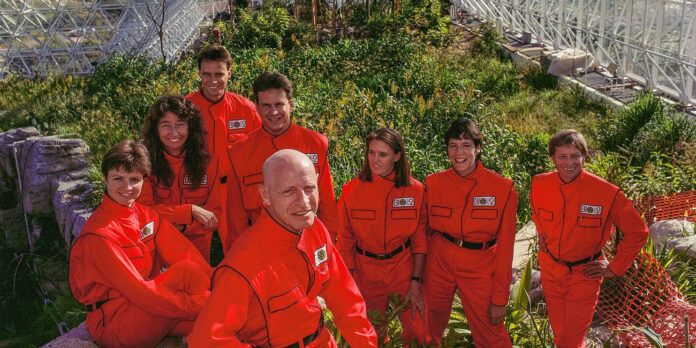 THE STORY – In 1991 eight visionaries embark on a two-year experiment to quarantine themselves inside Biosphere 2 — a self-engineered replica of Earth’s ecosystem.

​With a title like “Spaceship Earth”, you would expect Matt Wolf’s latest film to be a science-fiction yarn about space travel to far distant galaxies and beyond. In fact, during the course of the entire film, no-one leaves the Earth’s atmosphere. Wolf’s “Spaceship Earth” is in actual fact, a documentary regarding a large-scale ecological experiment where eight participants were locked inside a biodome for two years. This experiment actually happened back in 1991 and stirred up a media frenzy as well as throwing up several controversies that surrounded those leading the project.

The film opens with news footage of “Launch Day” when the eight participants were locked in the biodome. Dressed in identical red jumpsuits, they almost look like astronauts, with one newscaster commenting “it’s like they’re going to the moon”. Our story doesn’t actually start in 1991, but 25 years earlier back in the 1960s and early 70s. The journey started with a book and a man; the book was “Mount Analogue” and the man was John Allen. People like Kathleen Gray, Marie Harding, and William Dempster all gravitated towards Allen and they started up a commune of sorts called the “Theater of All Possibilities”. Unlike the other communes that dominated San Francisco, they were going to last because they didn’t do drugs.

Their collective did indeed last. In fact, they moved to New Mexico and set up a ranch where individuals such as Margaret Austine and Mark Nelson joined them. Austine was even put in charge of the group’s architectural projects which included the building of a ship that sailed around the globe. Wolf pairs news footage and home video along with talking-head interviews. Allen and many of the individuals mentioned throughout the documentary are still alive, and they all seem just as energetic and enthusiastic now as they were in the past. Allen is such an intriguing character who was born and raised in rural Oklahoma and went onto join a union, then the Army, before going on to Harvard. Almost everyone interviewed seems to agree that John Allen is a genius. “He’s a mind magician” one person exclaims.

The concept of the biodome emerged in the 1980s. Allen’s collective was very much at the forefront of environmental and climate change data. An idea was formed to create a large-scale biodome experiment, partly influenced by science fiction films such as “Silent Running” but what they were about to do was “science fiction without the fiction”. With funding from billionaire Ed Bass, Allen and his group actually built the biodome which had its own coral reef, mini rainforest, and desert. Its name? “Biosphere 2.” And, if you’re wondering, “Biosphere 1” is our planet, Earth.

Of course, like all great and innovative concepts, this project doesn’t go exactly according to plan. The Biosphere 2 project was under intense scrutiny from the media, who found Allen and his group a little too “out there.” This led to Allen becoming more secretive which only added fuel to the fire. Sadly, Wolf doesn’t press for answers from Allen about certain decisions he made, and there aren’t any interviews from those who had concerns or issues with the project so we don’t get their side of events. Another concern about the lack of diversity between the participants isn’t addressed either. Nor does anyone seem to address whether or not the participants had any long-lasting psychological trauma from being isolated in the biosphere and being cut off from the rest of the world for two years.

This isn’t to say that “Spaceship Earth” isn’t very good. It’s actually one of the most riveting and fascinating documentaries that you will watch this year. It’s just that there’s such a wealth of information and such a wide array of players that it’s impossible for all of them to be given the screen time that they so rightfully deserve. This documentary may have been better suited as a mini-series so that we could delve into the story in further depth and detail, especially with what happened after the participants left the biosphere. Towards the end of a documentary, a certain individual pops up with capitalist intentions but the aftermath of their input into the project is only skimmed over.

There’s a lot to take away from “Spaceship Earth” especially when you consider the events plaguing our society and the environment today. One has to wonder what sort of media attention John Allen and his team would have received today, especially considering that global warming remains such a controversial talking point in our political climate. It would be absolutely wonderful for Wolf to be given the opportunity to develop a series on John Allen and Biosphere 2 because by the end of “Spaceship Earth” you will be left wanting more. And, that’s the sign of a great documentary.