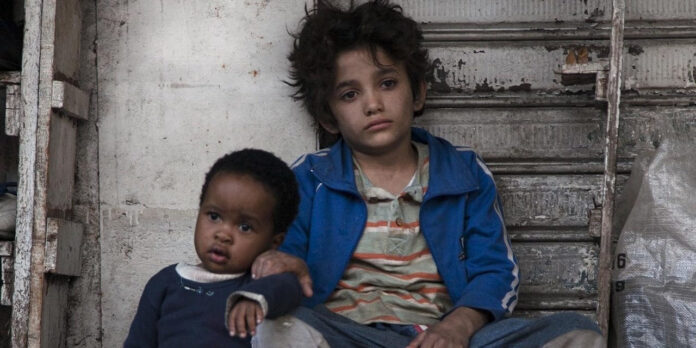 ​​Imagine being 12 years old, alone, with no money, family or support and you have an infant baby to take care of on top of all of that? Can you imagine it? Sounds unrealistic you say? Well, in Nadine Labaki’s emotionally gut-wrenching drama “Capernaum,” the unbelievable situation is presented as a reality for all of us to bear witness to, forcing us to confront not only how lucky we are to not be in a similar situation but also to recognize the systemic problems and issues facing millions of people around the world who are trapped in such poverty.

Zain (Zain al Rafeea) is a Lebanese boy who sues his parents for the “crime” of giving him life. There’s more to it than though, as his parents irresponsibly had too many children with not enough money or care, to provide for them. After having to watch his beloved sister get sold off to another man just so their parents could continue to survive, Zain leaves his life behind and is forced to live on the streets, hustling for money, food, and survival. Along the way, Zain meets an Ethiopian refugee Rahil (Yordanos Shiferaw) and her baby son Yonas, who takes care of him, until he later finds himself back on the streets, only this time the 12-year-old-boy has to also look after the infant baby Yonas.

“Capernaum” goes for the heartstrings, presenting its narrative through the eyes of an all too young child who should not have to have such burdens placed on his shoulders. The character of Zain, as played by Zain Al Rafeea, is resourceful, street smart and headstrong. The performance given by Al Rafeea is not only one of the best youth performances of 2018 but one of the best performances by anyone in any age bracket. He is the man of his household where his irresponsible and uncaring father fails to provide for him, his sister and other members of their family.  It is a compassionate, sometimes brazen performance that will stick with you.

Nadine Labaki drops us and her camera into the streets of Lebanon and takes us on an emotional journey which explores various deep issues including poverty, the refugee crisis, undocumented immigrants and the true issue of it all, bad parenting. Zain’s parents are not only neglectful towards him in their efforts to survive but they are also the root of their own problem within the cultural space they occupy. By having too many children, without the means to support them, they and many other families are flooding the streets with desperation, broken dreams and unfair expectations (or none at all). It’s an enraging set of circumstances for anyone to be caught up in. The fact that we see these issues through the eyes of a young boy who has to quickly transition into becoming a man, in order to simply stay alive, is both heartbreaking and horrifying.

Some have criticized “Capernaum” for being emotionally manipulative when I feel it’s the exact opposite. It’s extremely authentic, filled with everything one could want in a film: a sense of purpose, great pacing, a central lead performance we can root for and did I mention it will probably make you shed a few tears? “Capernaum” translated to English means “chaos” and that is the exact state of current world affairs which Nadine Labaki has attempted to tackle here with her emotionally devastating film. While it’s not exactly subtle, it is certainly unforgettable and is undoubtedly one of the most emotionally impactful films of the year, not just foreign but any language.