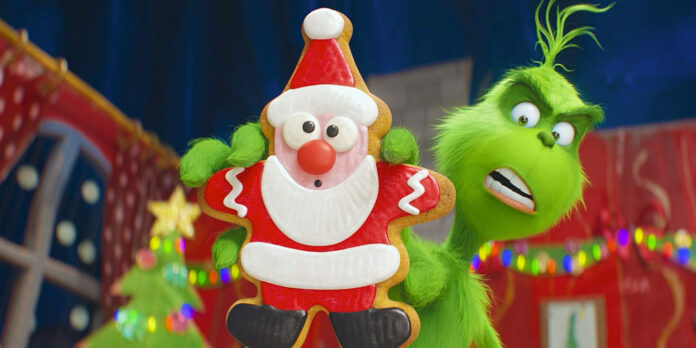 THE STORYThe Grinch and his loyal dog, Max, live a solitary existence inside a cave on Mount Crumpet. His main source of aggravation comes during Christmastime when his neighbors in Whoville celebrate the holidays with a bang. When the Whos decide to make Christmas bigger and brighter, the disgruntled Grinch realizes there is one way to gain peace and quiet. With help from Max, the green grump hatches a scheme to pose as Santa Claus, steal Christmas and silence the Whos’ holiday cheer once and for all.

​​​​​”How The Grinch Stole Christmas” is one of America’s most enduring Christmas stories and the animated special from 1966 which helped to propel it to that status, is an almost exact recreation of the original Dr. Seuss book. It’s music, animation and iconic narration by Boris Karloff are the stuff of most people’s Christmas memories, which is something that must be considered when watching a new adaption. To really judge the film based on its own merits it’s best to set aside any expectations of being true to the story and be open to what the filmmakers have to offer. With their new incarnation, simply titled “The Grinch”, Illumination studios opted to blend their own variation with the bare bones of the story and throw in a colorful art style that is a well-updated version of the original Seuss illustrations.

“The Grinch” opens by setting the stage, complete with a narration by Pharrell, that takes us through the winter wonderland that is Whoville just before Christmas. The small city is frosted with snow and heavily ornamented with lights and decorations and the gorgeous animation makes it all very enchanting. We are introduced to adventurous Cindy Lou Who (Cameron Seely) and her busy single mother Donna Lou (Rashida Jones) before moving to the star of the show, the Grinch (Benedict Cumberbatch). His cave is in a mountain that looms over the city of Whoville and there he and his adorable dog Max live in a gadget-filled solitude. When the Grinch discovers that they have run out of food, he and Max reluctantly go down to Whoville to restock the pantry.

Once there he grumbles his way around town being as rude and thoughtless as you would expect while the kind and jolly citizens of Whoville only seem puzzled by his behavior. He learns that the town is planning to have a Christmas three times as big as any year before but thinks it must be a joke. It doesn’t take long for him to discover it’s the truth and he decides that he must take matters into his own hands and stop Christmas from coming, anyway he can. Meanwhile, Cindy Lou Who is hoping to find a way to make her overworked mother’s life easier and decides the only way to do it is to ask Santa for some help and to do so she may just have to ask him in person.

The craft behind “The Grinch” is impressive, the animation is stellar and from the sun setting over the mountain vistas to the dancing baubles on the Christmas trees, there is always something beautiful to look at. The music has been updated as well, including the song that the Who’s sing around the tree and they have been reimagined in a hip-hop style and while very different than the original film, the songs are well done and work with the story that is being told. The meticulous sound design allows you to hear the crunch of snow under the characters feet and the whoosh of the wind as it blows when the Grinch is overlooking the valley. Benedict Cumberbatch, doing his best American accent, is delightfully grumpy and his impressive acting chops are used to great effect to give the Grinch’s dialogue an emotional depth that is surprising in a film geared towards children.

For all the skill behind the film, the story is its weakest point. While it does a great job of making Whoville feel like a lived-in place with shops and cars and a myriad of people, it also throws in an entirely new plot point revolving around Cindy Lou Who that feels tacked on and predictable. The film is at its best when it is interpreting Dr. Seuss’ style and message, but when it turns to the new material it starts to look too much like Illumination studios other work, especially “Despicable Me”. However, the characters are easy to like and the comedic set pieces are funny if a bit random and both of those things go a long way to helping recover from the stories’ missteps. Ultimately, “The Grinch” is a warm-hearted remake of a classic with an updated style that will not appeal to everyone, but as an interpretation of Dr. Seuss’ work, it is a worthy addition to any Christmas watch list.