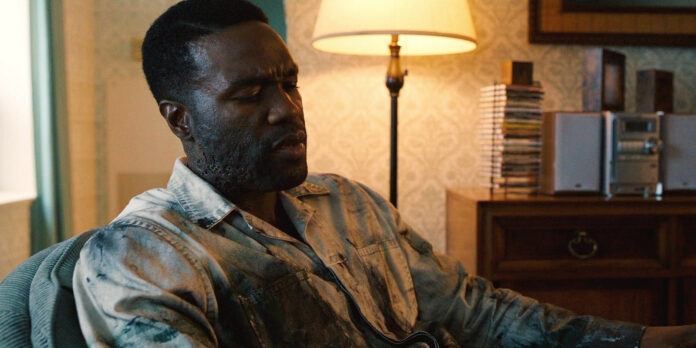 THE STORY – In present day, a decade after the last of the Cabrini towers were torn down, Anthony and his partner move into a loft in the now gentrified Cabrini. A chance encounter with an old-timer exposes Anthony to the true story behind Candyman. Anxious to use these macabre details in his studio as fresh grist for paintings, he unknowingly opens a door to a complex past that unravels his own sanity and unleashes a terrifying wave of violence.

It’s been frequently noted how horror can act as a mask for a more complex discussion of deeper issues. Some of the genre’s best entries have been able to deftly combine terrifying imagery that can speak to a profound analysis of social themes or emotional depth. Even those with seemingly lower ambitions can convey such messaging that can make them far more appealing than what appears on the surface. The premise of “Candyman” certainly fulfills this notion, much like its predecessor. Similarly, it is also a film that features impressive stylistic moments but struggles to coalesce its narrative into an engaging whole.

As with the first film, the story here takes place in the Chicago neighborhoods with a dark, insidious aura in the air. Anthony (Yayha Abdul-Mateen II) is an artist with mediocre success, thanks mainly to the curation efforts of his girlfriend Briana (Teyonah Parris). To seek inspiration for a new exhibit, Anthony ventures out into the city and finds himself in the old projects of Cabrini-Green. It’s here that he comes across the tale of Candyman, a Black man who was falsely accused of a heinous crime and murdered by the police. Now he can be summoned by saying his name five times in a mirror. What was thought to be merely an urban legend soon becomes frighteningly real as bodies are left in the wake of those who call him. As the bloody mayhem escalates, Anthony is plunged deeper into a psychosis that mentally connects him to the killings, setting him on a dangerous journey where his humanity hangs in the balance.

There is an intriguing sensibility that Nia DaCosta brings to the film that makes one appreciative of her directorial vision. The atmosphere is firmly established in the beginning as one that values intense compositions to increase the tension, and the filmmaking showcases her talents. The set pieces are thrilling in their execution, indulging in the violent spectacle and creative staging that can often emphasize the subtler indications of terror. The brief glimpses one sees of Candyman in fleeting reflective surfaces add to the overall sense of dread that is impressively employed. Not all of her choices are effective, as there is an occasional disjointed sense of pacing that rushes the momentum too quickly. However, these are more issues of the script than her efforts specifically, and her actions compensate for the larger foundational issues.

Those difficulties in the screenplay, written by DaCosta along with Jordan Peele and Win Rosenfeld, are what ultimately sinks much of the potential this piece could have had to become far more captivating. While it features some compelling individual moments, the plot itself struggles to collect them all into a natural progression. Scenes never feel to build upon themselves, and the escalation of stakes is timid and contrived. It’s an offense that is more potently realized when considering the shallow characters that rely on lazy backstories and muddled motivations. By the time the finale arrives, things veer off into territory so inane that it borders on the absurd and not in any reasonable measure. Even the general commentary on gentrification and racial persecution, a theme that even the original had difficulty presenting cleanly, is stale. It’s a shame that such talented people provided a script littered with so much stilted dialogue and tiresome social critiques that fall apart quite easily.

Performances in horror can be something to marvel at, and Abdul-Mateen II possesses an inherently engrossing intensity. The physicality he embodies isn’t always histrionic, and one appreciates the grounded nature he maintains as his mind descends further into the darkness. It’s appealing work, though Parris might even be more remarkable in a role that she elevates far beyond the page. She is often a more interesting screen presence, harboring the layers of fear in her situation that is expertly displayed in her portrayal. There are good turns from several supporting players whose roles are not that developed, particularly from Colman Domingo, who captures his naturally inviting charm once again. Nathan Stewart-Jarrett also has a fun energy, but he sadly inhabits a part that, despite its best intentions, skids into the “gay best friend” trope without ever finding any natural creativity in breaking the stereotype. Every other ensemble member is merely serviceable, burdened by the material that barely makes their characters worthy of investment.

It’s a great disappointment not to be on board with this new interpretation of “Candyman.” It certainly has elements that would make one responsive, especially as it relates to DaCosta’s filmmaking which manages to luxuriate in an effective mood. However, despite the capable direction and handful of decent performances, the hollowness of the story’s construction bears most of the weight and collapses. There is hardly a moment when the characters and themes are all that alluring, leaving dissatisfaction at the bungled storytelling that ends on a ridiculous note that is unfulfilling. Indeed, there is still a power in horror that can unleash some genuinely brilliant films. It’s painful to say that much of that is elusive here.