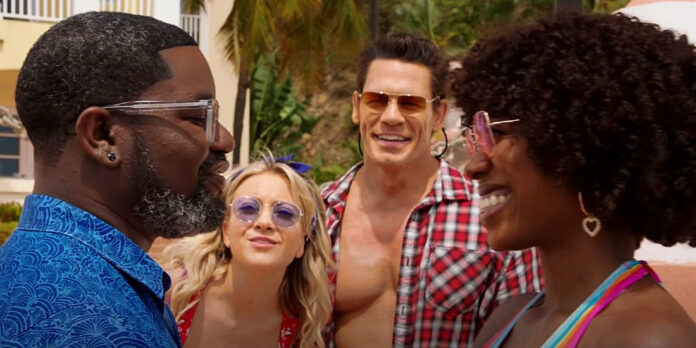 THE STORY – Marcus and Emily enjoy an unusual week without inhibitions when they meet new friends on vacation, but they are horrified when Ron and Kyla show up uninvited to their wedding.

​They say what happens on vacation stays on vacation. Well, unless you meet a couple who is kind of insane and can’t seem to let go of the few days you spent together.

In “Vacation Friends,” Marcus (Lil Rel Howery) and Emily (Yvonne Orji) meet their total opposites while on a romantic trip to Mexico, and what’s worse is they can’t get rid of them. Marcus, an extreme planner, and super Type A person is planning to propose to Emily, but, of course, everything goes wrong almost instantly — mainly thanks to a jacuzzi in the room above theirs, causing quite a mess for housekeeping. Lucky (or unlucky) for them, Ron (John Cena) and Kyla (Meredith Hagner) come to the rescue and help them with a place to stay. These two, by comparison, are reckless, loud, and unpredictable — everything Marcus isn’t and can’t stand.

This unlikely pairing of the two couples kicks off a very different vacation for Marcus and Emily but ends up being exactly what they needed. They have a wild adventure on a boat, basically don’t spend a single minute sober, and even get hitched in the most memorable way. Emily even admits to Kyla that it’s the first time she’s seen Marcus relaxed. When it’s time to “break up” with their vacation friends, clearly, one of the two pairings has a more challenging time letting go. Months after Marcus and Emily have moved on from that wild time, guess who comes crashing — literally — into their real wedding. Just like there were many raunchy shenanigans in Mexico, a lot of wild moments await them when these two come back in their lives. This time, though, they have to worry about Emily’s strict father and other family members who haven’t warmed up to Marcus and who aren’t ready for the wild Ron and Kyla duo.

Whether it’s a young kid you met on the beach and made sandcastles with, people you’ve bonded with during an excursion, or maybe even locals you’ve met somewhere in the world, there’s nothing quite like sharing your vacation experience with strangers and having a blast along the way. When it’s time for the vacation to end, the friendships will likely end too, but at least you have fond memories to look back on. Ron and Kyla take it to a new level and hilariously can’t let go of that week they spent together. It’s also funny to see Marcus and Emily try to tip-top around the subject of the vacation with their families, mainly because everything they did is something Emily’s family disapproves of. Cena and Hagner know how to up the crazy with their characters, and the long list of writers on this movie made sure that everything coming out of their mouths was raunchy. Howery and Orji nail the freaked out and reserved couple to a T, but it’s nice to see them let loose and embrace these crazy friends that clearly want to be in their lives forever.

What this movie has in terms of crazy moments on screen, it lacks in terms of doing anything different from the usual by-the-numbers formula. Pretty much from the start of the movie, you know that Marcus and Emily will not have an easy time getting away from Ron and Kyla. And when they do show up in their lives again, you can only guess that lots of things will go wrong, like maybe something with the rings that were passed down to Marcus or the families hearing about the wild times in Mexico. There’s nothing that’ll surprise audiences, and the movie doesn’t take any risks to do something different. The movie also begins to drag when Ron and Kyla meet with Marcus and Emily’s families and “shock them” with all the crazy things they say or do. That schtick gets pretty old, primarily since so many scenes are dedicated to showing just how rampant they are compared to everyone else.

“Vacation Friends” has its fun moments with all the raunchiness and debauchery that goes on during a trip to Mexico, but it starts to get a bit old when the vacation fun makes its way into the real world. Mix that with a script that doesn’t do anything new, and you have a movie that practically tells you what direction it’s headed in within the first five minutes. But the four leads do a good job of bringing their characters to life, especially Cena and Hagner, who try to outdo each other with their craziness. It’s fun to meet new people, especially when you’re on a relaxing trip, but this movie will make you hope and pray that you don’t run into the Rons and Kylas of the world.