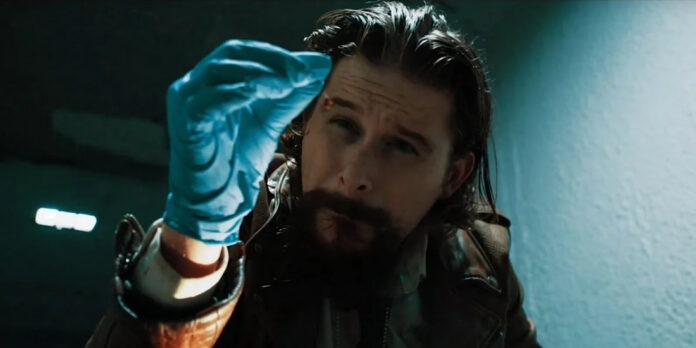 THE STORY – Detective Fox loves work and alcohol. After going to AA, his sponsor, Chip, becomes the main suspect in his investigation of a missing kid. Fox also starts to believe that people are disappearing up Chip’s butt.
​
THE CAST – Tyler Cornack, Angela Jones, Kristina Clifford, Gail Boyd & Tyler Rice

Chip Gutchell (Tyler Cornack) isn’t a happy person. His job as an IT guy for a very small business is boring; he has a young son who’s wearing him out; his wife is clearly not interested in him anymore. But all that changes when he goes for his first prostate exam. The doctor’s finger going up his ass makes him feel something, and soon enough, he’s sticking bigger and bigger things up there (which may or may not include a dog and a child). Five years later, Chip has buried these desires through Alcoholics Anonymous meetings, but when he’s assigned as a sponsor to newcomer Russel Fox (Tyler Rice), he relapses. Soon enough, another child goes missing, and Russel is the detective on the case.

Such is the plot for “Butt Boy,” and it’s not at all the film you would expect. It’s so committed to playing its absurd premise completely straight that it actually works on its own terms, never once feeling like a so bad its good guilty pleasure. Even the elements that could come off as more campy – such as everything about Russel who’s so much like a neo-noir police detective, right down to the bad boy attitude and slight twang in his voice, that the film calls him out on it – come across as perfectly normal. This is for two reasons. The first is that the premise is so far out there that practically anything would come across that way. The second is that director/writer/star Cornack has the tone of the film under tight control, and lets that tone sit in perfect opposition to the ridiculousness of the premise.

Everything in “Butt Boy” is straight out of a ‘70s neo-noir thriller. So much so that you could almost call it an homage, except that the premise ensures that it isn’t that at all. It’s not a satire, either, as it isn’t putting all the tropes of the genre through a revealing comedic lens. It’s something else entirely; something completely unique that in many ways defies description. It shouldn’t work. This borderline misogynistic/homophobic allegory about one man’s fear of buttsex shouldn’t work anywhere near as well as it does. But it does by leaning into the absurdity of its premise in such a way that you can only sit back, relax, and let the film take you wherever the hell it’s going. To be sure, at first, it may seem like a weirder, worse, gender-flipped version of this year’s “Swallow,” but in the second act, it starts going places no other film would dare, never looks back, and is all the more entertaining for it.

The film’s last act is one of the most insane, gross, twisted pieces of WTF-ery that I have ever seen in a film. It plays it straight as an arrow and elicited more laughs and joyous squeals of delight from me than I ever would have thought possible. Like a gonzo, acid tripping, midnight movie version of Woody Allen’s “The Purple Rose of Cairo,” it wrings every ounce of humor it can out of taking its patently ridiculous premise and playing it entirely seriously. The stylish cinematography and score help immensely in that regard, as do the committed performances of Cornack and Rice. In this way, “Butt Boy” is a rarity. A film that proves that true originality is still possible, even when working with parts that Hollywood shat out decades ago.