“SELAH AND THE SPADES” 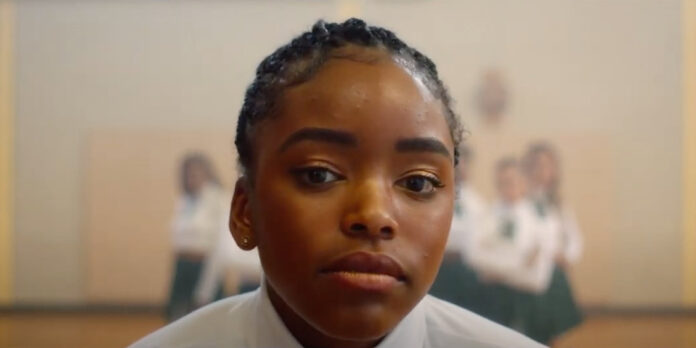 THE STORY – Five factions run the underground life of Haldwell School, a prestigious east coast boarding school. At the head of the most powerful faction – The Spades – sits Selah Summers, walking the fine line between being feared and loved.

​Five factions run every illicit activity at the Haldwell School: the boarding school at the center of “Selah and the Spades.” These factions function like a high school mafia, working out deals between the dueling families to accommodate drug deals, cheating, and, of course, the prom. In writer-director Tayarisha Poe’s debut, this world is an ever so slightly heightened reality, with messages delivered when it needs to make an impact. The film immerses us in this world where little matters outside of the control these factions vie for. A strong sense of style is on full display and makes for a fascinating watch, but occasionally overshadows the story.

Lovie Simone stars as the titular Selah, a senior with almost unshakable confidence. Selah may only be 17 but knows how the world sees women, black women in particular. Staring down the camera without a smile, Selah declares: “When you’re 17, you’ve gotta grab control where you can.” And grab control she does. Or moreover, she becomes addicted to this control, and she remains desperate to hold on. Those who dare to stand up to her and her faction, the Spades, get beat – or rather, they “fall down the north stairwell.” When a tenth grader, Paloma (Celeste O’Connor) enters the scene, Selah takes her under her wing, grooming the younger student to take over her faction, but struggles to let go of power.

A strong sense of style makes every moment pop. Cinematographer Jomo Fray, in his feature debut, creates a surreal, almost otherworldly atmosphere. Blues and greens pop while characters periodically talk and look directly in the camera, talking straight to the audience while still somehow not breaking the fourth wall. Brilliant pieces of production design heighten this all the more like a forest lit up with neon lights or the school play’s set design made up of nothing but taut red yarn. Style certainly overtakes substance here, as the visuals often feel much more fully fleshed out than the plot, but it makes the world engrossing.

The film sees its teen characters as real humans rather than children who don’t know any better. This isn’t a coming-of-age film either. These are teens, yes, but their world and their feelings aren’t portrayed as silly teen problems. Selah’s contentious relationship with her mother, for instance, fuels Selah’s need for rebellion. Or at least, it fuels her need for control. Her mother is the sort who isn’t satisfied with 93% on a test because those seven points are unaccounted for. She’s a great student despite her preoccupation with running illegal operations, but she’s made to feel like she’s not good enough.

Interestingly, the film has no real desire to delve into romance. It’s refreshing to see a teen-driven story that’s more interested in power dynamics and control than wooing a fellow classmate. The relationship between Selah and Paloma is plenty fascinating, and the roles shift and change frequently. Jharrel Jerome’s Maxxie shows a great deal of interest in girls, but Selah sees that as a distraction from his role in the faction. After seeing what Jerome was capable of in “When They See Us,” it’s tough to not feel he’s underused here in a secondary role.

“Selah and the Spades” is an exciting debut on so many fronts. Simone is a standout talent who carries herself without insecurity or weakness. Fray’s control of the image makes every frame feel purposeful. Poe’s confident direction and poetic script prove she’s a director to keep your eyes on. Though this film has weak spots, it’s a thoughtful and unique world that’s worth diving into.